It has called on the government to immediately lift a ban imposed in September which stops humanitarian agencies from going to conflict areas.

But the authorities say that flood waters are now starting to recede.

The north of Sri Lanka is currently the scene of heavy fighting between the army and Tamil Tiger rebels.

"Only government-approved food convoys have been allowed to enter the north since the government, in September 2008, ordered the United Nations and nearly all humanitarian agencies to withdraw," the Human Rights Watch (HRW) statement said.

"That decision has severely limited humanitarian access to the affected population." 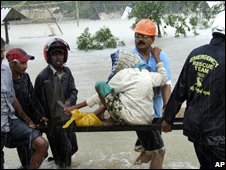 HRW says that thousands of shelter kits are available from the humanitarian community for emergency shelters for the affected families.

But it says that that the government has "reportedly insisted" that only shelters without logos from humanitarian agencies will be allowed into the north.

"Such unnecessary restrictions on assistance are unacceptable in this time of urgent need," HRW Asia Director Brad Williams said.

"The Sri Lankan government should stop playing games with aid organisations and let them get on with their life-saving work.

"Tens of thousands of people in flooded areas are without adequate shelter and need help now."

Government officials and humanitarian agencies estimate that between 230,000 and 300,000 displaced people have been trapped in a small area of the north-east by fierce fighting between the Sri Lankan army and separatist Tamil Tiger rebels.

The rebels are accused by HRW of refusing to allow displaced people in areas under its control to leave for government-held territory.