Occupying Sri Lanka’s colonial governor, Maj. Gen. G. A. Chandrasri was seen coordinating the two factions collaborating with the Rajapaksa regime, the Angkajan-led SLFP and Douglas Devananda-led EPDP, in staging a simulated demonstration in Jaffna and Vanni against UNHRC discussing Sri Lanka in Geneva on Monday. The simulation forced in sections and individuals waiting for benefits from the Colombo regime. An attendance register was maintained for the participants. However, a media clip captured comments of a passing-by youth street vendor, who universally encapsulated the game on the island. The youth told the unemployed graduates in the ‘demonstration’: “I am not educated like you to perform this act.” The youth has not said that to the ‘demonstrators’ alone, commented media circles witnessed the scene in Jaffna.

The US and UK buttress Sri Lanka’s LLRC hoodwink as solutions, but a game of fuss on implementation is simulated both in Geneva and in the island by the Colombo regime.

The US bloc and India that were in complicity with Sri Lanka in the genocidal war against Eezham Tamils try to limit the solutions to the implementation of the 13th Amendment and implementation of Colombo’s LLRC recommendations so that the identity and territoriality of Eezham Tamils as a nation could be annihilated and the colonial ‘victory’ of the majoritarian state could be consolidated.

Both the power blocs in partnership have found collaborating sections in the Tamil polity as well.

However, all are in the game in pretending great pressure, pretending great achievements and in sorting out petty nuances over time and space, political observers in the diaspora commented. 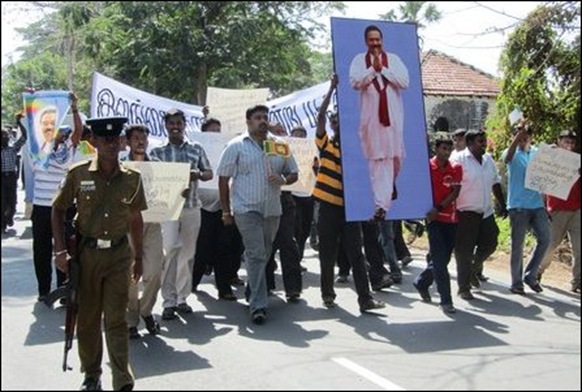 On Monday, carrying a Lion flag of his Sri Lankan state, the war crime alleged former commander of the SL forces in Jaffna and the current colonial governor Chandrasiri was insisting that the EPDP paramilitary of SL minister Douglas Devananda and the SLFP clique of Angkayan should come together in the UPFA demonstration in Jaffna. Mr. Devananda is part of the SL delegation currently in Geneva.

Hunting for people to take part in their protest, the EPDP and SLFP were competing in inviting the poverty-stricken victims of genocide, especially the families waiting for resettlement in housing-schemes, unemployed graduates awaiting government jobs, teachers who have sought transfer from remote areas, the family members of missing people still believed to be kept alive in SL incarceration and ‘rehabilitated’ former LTTE members subjected to various threats.

The victims were individually targeted in a pressure campaign to come to the office of the SLFP situated at Temple Road in Nalloor on Monday morning, if they were to get preference in receiving benefits or considerations.

The victims were then instructed to take part in the ‘demonstration’ marching behind a huge cut-out of Mahinda Rajapaksa, chanting praises on him.

The SLFP clique had earlier threatened the UN office in Jaffna to ‘keep the main gates open’. However, the gates remained closed when the UPFA protest arrived there.

After 15 minutes of ‘agitation’ orchestrated by the goons and paramilitary operatives outside the gates, the UN representatives opted to come out opening their gates to receive the SL ‘appeal’.

After this, the victims who were forced to take part in the demonstration were taken through Stanley Road to Veampadi Junction, where the SL governor was awaiting them.

Meanwhile, EPDP paramilitary, with less than 200 ‘participants’ staged its protest from Muniyappar Temple in the esplanade of the Jaffna Fort. Unemployed graduates were promised employment for participating in the protest organised by the EPDP.

Despite the ‘efforts’ of Chandrasiri, who was earlier the operational boss of the paramilitary groups in Jaffna during his military tenure, the EPDP refused to cooperate with him and the SLFP.

However, after prolonged ‘discussions’ at Veampadi Junction, Chandrasiri led both the factions to go parallel with ‘parity’ in the double road along the Jaffna Hospital, towards the bus station. 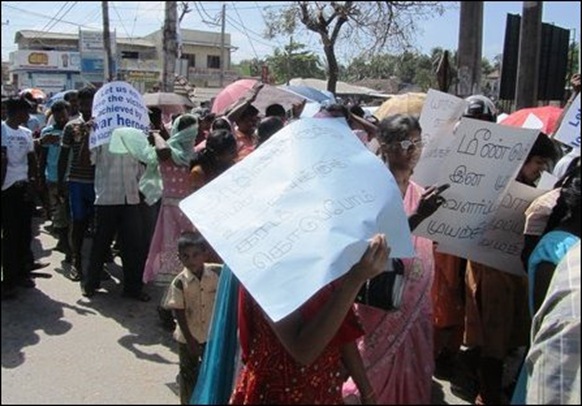 The civilian victims forced into the demonstration avoided showing their faces

Similar protests were also ‘staged’ in Ki’linochchi and Mullaiththeevu districts of Vanni.

The officials of the secretariats in Vanni were also forced to write and prepare the placards.

SL Presidential sibling and economic development minister Basil Rajapaksa was also behind organizing the protests in the North.