Britain has questioned concerns raised by two charities which say that Sri Lankan Tamils deported from the UK are at danger of being tortured or raped.

Another charter flight returning people to the island nation, including Tamil and Sinhala failed asylum-seekers, is due to leave on Tuesday.

But Human Rights Watch and Freedom from Torture say that the flights should be suspended because some ethnic Tamils been subjected to cruel treatment after arriving. 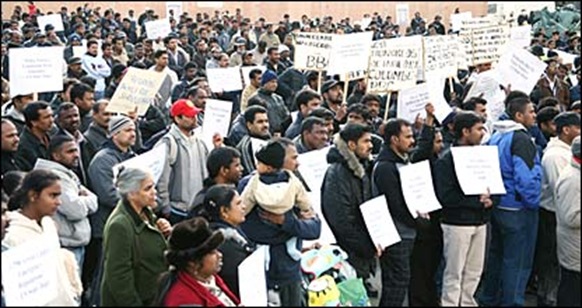 The British Foreign Office told the BBC that the government only sends people back to Sri Lanka when it and the courts are satisfied that an individual has no protection needs.

It cited a ruling from the European Court of Human Rights that not all Tamil asylum-seekers require protection. And it said there had been no substantiated allegations of mistreatment of those returned from the UK.

In effect Britain is disputing strongly-worded statements released by the US-based Human Rights Watch and the British-based Freedom from Torture.

The former said last weekend that the Sri Lankan military and police have arrested some Tamil returnees, beating them, covering them in kerosene or raping them to force them to confess involvement with the Tamil Tigers.

The organisations say that although British High Commission officials meet most returnees and give them a small assistance package, this is far from adequate protection.

And they say deportation charter flights including one due to leave on Tuesday should be suspended.