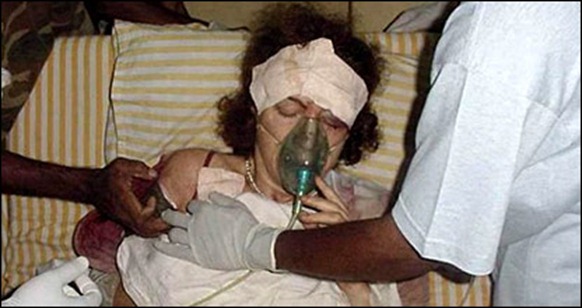 Her iconic figure with a black patch over the left eye reporting from global conflict zones has been seen by hundreds of thousands around the world.

Marie Colvin killed in Syria, alongside award winning photojournalist Remi Ochlik, lost her eye in Sri Lanka when shot at by the military while entering government territory after filing a report to the Sunday Times from restricted Tamil Tiger held territory in April 2001.

Paying tribute to Mylvaganam Nimalarajan, of the BBC Sinhala service, in a public event in London in 2002 Marie spoke of the dangers faced by war correspondents who lived in war torn countries but could not leave like their international colleagues.

Nimalarajan reporting the war in his native northern Jaffna to the outside world was killed in cold blood within a high security zone in 2000.

Even though she lost an eye in Sri Lanka, Marie never let the island out of her sight.

The battle waged by the Sri Lankan military against the Liberation Tigers of Tamil Eelam (LTTE) widely known as Tamil Tigers was coming to a bloody end in may 2009.

"I feel very angry," Marie as the foreign affairs Editor of Sunday Times who was not prepared to withdraw from reporting on the war in Sri Lanka told me.

This was a day before the Sri Lankan government declared its military victory over Tamil Tigers and Marie was following the developments closely.

She was angered that senior Tamil Tiger leaders who surrendered by arrangement with a very senior United Nations official to the Sri Lankan military were killed.

On the evening of 17th May 2009 she had recieved a ‘desperate phone call’ from the LTTE political head Balasingham Nadesan.

"They were trying to surrender but anybody attempting to approach Sri Lankan army lines was been shot," Marie recalled what Nadesan told her.

She has then called the UN Secretary General’s Chief of Staff Vijay Nambiar who she said had been assured by the Sri Lankan president that Mr Nadesan would be safe in surrendering to the Sri Lankan Army.

"They would take him under international law," she quoted Mr. Nambiar.

The LTTE political chief Nadesan was with the head of the LTTE peace secretariat Seevaratnam Pulidevan and other injured people.

Negotiations to surrender had been ‘going on for days’.

"What I find deeply, deeply distressing is that those negotiations was with the Sri Lankan government. British and Americans and United Nations, Mr. Nambiar who was in Colombo were all aware that they wanted to surrender," said Marie Colvin.

Marie was told by Mr. Nambiar, "that there would be no need for a third party to be there".

"I think, it would have been a lot better if there had been a third party there. If Mr. Nambiar in his position as UN envoy had gone to oversee, at least to witness the surrender." Marie told me.

However, according to Marie, Mr. Nambiar was given assurances by the Sri Lankan president that Mr Nadesan should hoist a white flag and he would be allowed to surrender.

This was around ‘one in the morning’ in Sri Lanka.

A Tamil parliamentarian from eastern Sri Lanka was also involved in the negotiations.

Chandrakanth Chandranehru of the Tamil National Alliance (TNA) who was speaking ‘directly to the president and to the defence secretary’ as well as the LTTE political chief has offered to witness the surrender, said Marie. However, on assurances given on the safety of the surrending Tamil Tiger leaders, MP Chandranehru stayed back.

According to Marie the Tamil MP was the last person to speak to Nadesan and it was minutes after the reported assurances by President Mahinda Rajapaksa to the UN special envoy.

Marie had been told by MP Chandranehru that Nadesan speaking over the phone at 1.06 in the morning on 18 May 2009 said that they were walking towards the Sri Lankan military and, "I will hoist the white flag as high as I can".

"The next thing we heard which was hours later the Sri Lankan government announcement that they have all died".

It was six days before the Sunday Times published her story under the title ‘Slain Tamil chiefs were promised safety’ on 24 May 2009 that Marie related this to me. Such was her generosity and the commitment to tell the story.

Sadly, I had to bide my time until Marie herself met with a violent death in another Asian battlefield where she chose not to leave and Mr. Nambiar confirmed her account to Inner City Press (ICP) in New York.

"In the middle of the night, Marie called me, the two people, I’ve forgotten the names, one was on the Peace Commission, they wanted to surrender. We need to get assurance, free passage. I said OK, I’ll do it. I took it up with foreign minster, the defense minister and the president. They would be treated like any surrendering prisoner," ICP quoted Mr Nambiar on Saturday.

Marie lost her eye in Sri Lanka. But they couldnt take away her vision. She lost her life in Syria. But they will never be able to take away what she lived for.

Her account that later became to be known as the ‘White Flag Incident’ vehemently denied by the Sri Lankan government, featured prominently in a UN report which found that war crimes allegations were credible and warranted a full investigation.

The report said it found credible allegations that the Sri Lankan government ‘violated the human rights of civilians and Tamil Tiger combatants’.

Furthermore, the report handed over to the UN Secretary-General on 31 March 2011called to investigate the role of the UN during the war in Sri Lanka.

"The Secretary-General should conduct a comprehensive review of actions by the United Nations system during the war in Sri Lanka and the aftermath, regarding the implementation of its humanitarian and protection mandates," the panel of experts report on accountability in Sri Lanka recommended.