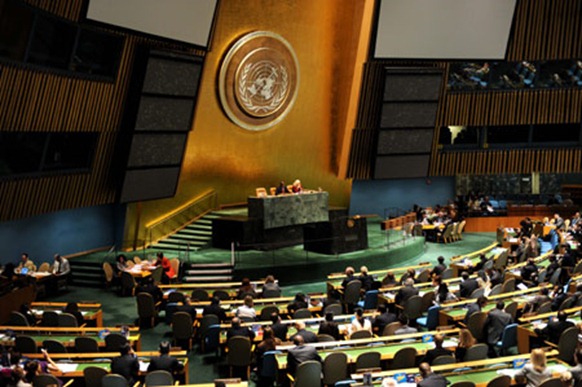 A draft resolution that appears in media reports as has been tabled by the USA at Geneva UNHCR, while specifying the ‘constructive’ LLRC recommendations that has to be implemented, talks of only de-militarizing the North but not the East and confines the model of political solution to undefined devolution of powers to the provinces and not to the North-East homeland of Eezham Tamils. While internationally binding Tamils to further dilution of the already inadequate provisions of the Indo-Lanka Agreement, the US-resolution giving international endorsement to LLRC-implementation bails out Sri Lankan state and its regime from international investigations of the genocidal crimes and from the need of any constitutional restructure of the unitary state.

The resolution ‘encourages’ the UNHCR to provide ‘advice and technical assistance’ to such a hoodwink, the steps of which too will be decided by Sri Lanka, and requests the UNHCR to present a report after a year, at the 22nd session.

While limiting, specifying and binding Eezham Tamils to seek political settlement only within the provincial model that is already existing in the unitary constitution, the imbalanced resolution on the other hand gives much scope, freedom and time to the manoeuvrings of the genocidal state.

The resolution also seals and binds the UN or any other international organisation from pursuing the case of Sri Lanka any further.

The only irritant in the resolution projected by Sri Lanka is that for the first time the state requires to comes under official international scrutiny by a UN body.

But, while Sri Lanka as a state could always manipulate every step of international scrutiny through bilateral ‘give and take’ or opportunistic alignments in the international bodies, the Eezham Tamil nation without state has no guarantees to get anything.

The game of farce enacted by the ultimate saviour and the genocidal state is ingeniously camouflaged to the gullible. Hats off to the ‘management’ of the deception, as we see sections of Tamils are already ‘thanking’ the Obama Administration.

In the early 1980s, to diffuse stress on the Sri Lankan state and on the Jeyawardane regime, the USA with the help of Colombo-US Tamils like AJ Wilson tried with the ‘District Councils’.

India’s stand on the current US-resolution is a much-debated topic.

Sections of academics in Tamil Nadu worry that another Tibet should not come in the southern part of South Asia. But informed diplomatic circles say that many of the Chinese inroads into the region take place with the silent nod of India.

India is explicitly shameless in expecting returns from Sri Lanka for its complicity in the genocide.

“India is persuading Sri Lanka to allocate oil exploration blocks in the waters that separate them as it considers the location too strategically important to allow companies from other nations to base themselves in this area.,” The Hindu said on Tuesday.

“New Delhi expects a favourable response after having stood by Sri Lanka during its annihilation of the LTTE’s military structure even though sections of the world community and Indian domestic public opinion assailed the security forces for human rights abuses,” The Hindu feature further said.

A Tamil Nadu academic on Wednesday exposed that even the barbed wires that kept the Eezham Tamils in the crime-filled detention camps have gone from India, from some businessmen having access to corridors of power.

Sections of media in Tamil Nadu lament that while much debate goes on internationally on the US-resolution at Geneva, the various states within India, outside of Tamil Nadu have no idea on what is going on.

How to expect the other states in India to take a stand, when the nuances of the US-staged farce is neither understood nor explained properly even in Tamil Nadu?

Whether the US-resolution getting passed in the UNHRC would relieve or further plunge the already traumatised Eezham Tamils is the question that is seriously debated in their political circles.

Polity in Tamil Nadu may have to think of its own paradigm in creating currents rather than being carried away in the waters of others.

Pro-US lobbyists among Tamils claim ‘success’ in bringing out the draft resolution. But the differences between an earlier ‘leaked’ draft and the ‘finally’ tabled draft, show the failures resulting from passive lobbying without an enlightened mass movement.

The US resolution appeared in Sunday Times in Colombo on Wednesday, as the version that has been finally tabled in the UNHRC at Geneva, follows: 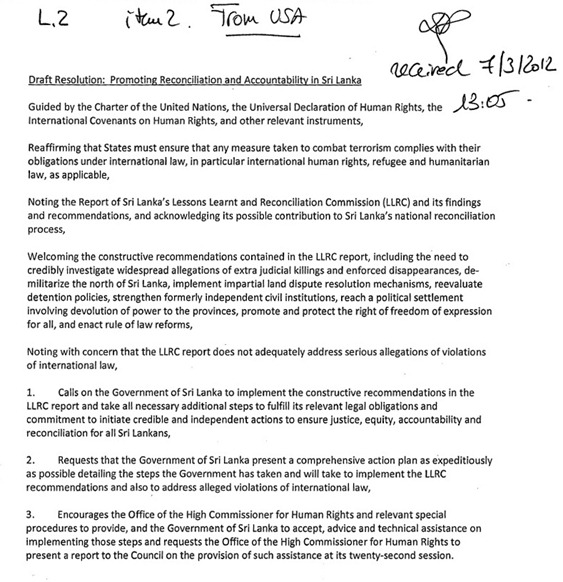 An earlier version of the draft resolution that was leaked and was being circulated in the media two weeks back follows. Note the changes that have occurred between the two drafts:

For comparison purposes, additional texts are indicated by underlines and removed texts are shown by marks.

Guided by the Charter of the United Nations, the Universal Declaration of Human Rights, the International Covenants on Human Rights, and other relevant instruments,

Reaffirming that States must ensure that any measure taken to combat terrorism complies with their obligations under international law, in particular international human rights, refugee and humanitarian law, as applicable,

Noting the Report of Sri Lanka’s Lessons Learnt and Reconciliation Commission (LLRC) and its findings and recommendations, and acknowledging its possible contribution to Sri Lanka’s national reconciliation process,

Welcoming the constructive recommendations contained in the LLRC report, including the need to credibly investigate widespread allegations of extra judicial killings and enforced disappearances, de-militarize the north of Sri Lanka, implement impartial land dispute resolution mechanisms, reevaluate detention policies, strengthen formerly independent civil institutions, reach a political settlement involving devolution of power to the provinces, promote and protect the right of freedom of expression for all, and enact rule of law reforms,

Noting with concern that the LLRC report does not adequately address serious allegations of violations of international law,

1. Calls on the Government of Sri Lanka to implement the constructive recommendations in the LLRC report and take all necessary additional steps to fulfill its relevant legal obligations and commitment to initiate credible and independent actions to ensure justice, equity, accountability and reconciliation for all Sri Lankans,

2. Requests that the Government of Sri Lanka present a comprehensive action plan as expeditiously as possible detailing the steps the Government has taken and will take to implement the LLRC recommendations and also to address alleged violations of international law,