(Tim King Salem-News.com) Google, are we misreading this? Haven’t Sri Lanka’s Tamils been through enough?

Does Sri Lanka’s ongoing lack of transparency over its recent Genocide of Tamil people extend to Google Earth?

It’s disturbing. Google Earth appears to be be using an unusual series of photographs to comprise its image of Sri Lanka as the regime stands accused of war crimes in Geneva.

It’s a question that deserves to be asked; why is the exact area where so many were killed by government forces hard to make out, and why is that image specifically from 2005, years before the intense attacks on civilians in this area, while adjacent images are from May 2009, in the middle of the worst of the ethnic cleansing?

The number one online resource that people turn to for research should refuse censorship to any government that stands accused of grave violations of international laws regulating war, and crimes against humanity.

In my continual research of the Genocide that left up to 160k Sri Lankan Tamils dead and missing, I opened Google Earth to study the peninsula where the Sri Lanka Army directed people into free fire zones, and then attacked these civilians with heavy artillery. I was disturbed to see that a square filter appears to have been placed over these notorious killing fields of a recent Genocide.

In this area, on the east coastline of north Sri Lanka, the government’s military forces unleashed bombardments week after week in 2009 onto a trapped population, while both the president and defense minister stared into the world’s TV cameras and specifically denied that "heavy weapons were being used", when they were absolutely and ruthlessly used.

When asked about the trapped population, officials from this island nation were angry and frustrated and had no patience for the few questions that were asked. It has been revealed that even U.S. officials asked Sri Lanka’s top political leaders to allow the Red Cross into the areas where civilian casualties were feared to be numerous, but the government denied that there were civilian casualties, and then refused to allow the Red Cross access into the affected region. Then, in an ominous contraction, President Majinda Rajapaksa said, "It was too late for that". There were not enough questions and far too few honest answers if there were any at all.

Groups with the motto "Do No Evil" should not place protective masks on Google Earth to shield the public from seeing areas where both war crimes, and crimes against humanity, are suspected of having taken place.

It seems fair to ask, what is Google’s role in backing governments as their officials stand accused of war crimes in Geneva? At what point should the Internet giant be expected to rise above the fray simply because that is the right thing to do?

We know that after the Genocide, Sri Lanka hired an unscrupulous advertising agency in London, Bell Pottinger, to write their UN speech and denial of war crimes. It turns out that long before they started shilling for the Belarus dictatorship and writing speeches for Sri Lankan war criminals, Bell Pottinger were paid apologists for the brutal Chilean dictator Augusto Pinochet, lobbying hard to help the General evade justice after he was arrested in the UK on torture charges in 1998.

It does not seem impossible to imagine that Sri Lanka is somehow buying this shield from Google Earth. I have written to the email address they list for questions, specifically listing my complaint, asking why the image is more obscure in that particular area, and I have not received a reply.

This is a strong charge, but it is exactly what appears to be going on. Google is denying people the ability to look at a place where a government did everything in its power to commit mass murder; ethnic Genocide, and they did it effectively and with a self-assured attitude.

Island of Beauty and Death 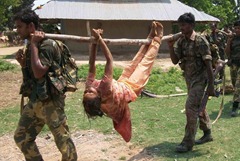 For those who don’t know, Sri Lanka is an island nation off the east coast of India, it is beautiful and tropical and has lush beaches, incredible food and rich history and traditions.

In this story we are talking about the northern part of Sri Lanka, also known as Tamil Eelam, where a three-decade long civil war for independence in the north ended in a terrible ethnic cleansing of civilians and an established resistance force.

Previously known as Ceylon, the island was a primary stopover for the early spice traders and even today has a national spice council. Tourism is one of the main industries and without question, Sri Lanka is known for incredible surfing. 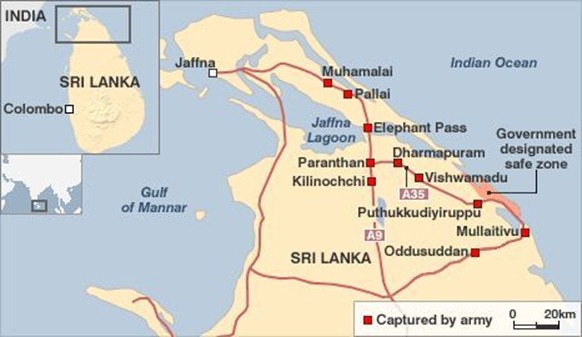 Most of Sri Lanka, a little more than 80% of the population, is Sinhalese Buddhist. About 18% of the population is Tamil; most are Hindu, with a Christian minority. There was an ethnic cleansing of Muslims in the contested northern region in the 1980’s, where the majority of Sri Lankan Tamils have traditionally lived.

Like all ethnic cleansing that has taken place here, the political and military moves made against Muslims was a large mistake and while they were mostly driven out and not killed, many did die and it is a stain in the history pages.

In fact, the Muslim exodus from north Sri Lanka is one of the first things I learned about this place. I worked with a friend at the Las Vegas FOX station, whose family, Sri Lankan Muslims, were refugees in the United States as a result of this ethnic cleansing. Tamils and Muslims do live throughout Sri Lanka today, though members of both often face segregation.

The most serious divide remains between the Tamils and Sinhalese, and it is rooted in policies established during the British colonization of Ceylon which lasted for many years. During the years of British rule, preference was often given to Tamils. They were allowed to work in government positions, they were often better paid than their Buddhist counterparts. Naturally, while this took place, resentment in the Sinhalese community grew and grew.

After achieving independence in 1948, Sri Lanka’s Sinhalese Buddhist majority took over and a battle against the Tamil culture was unleashed; one that would lead to sixty plus years of terrible strife, and would culminate just over three years ago in a government orchestrated bloodbath.

For thirty years, beginning in 1948, Tamils attempted to hold onto their language and culture and their rights by using a Gandhi-style non-violent resistance, and all they did was lose. This led to the forming of the breakaway state, Tamil Eelam, and the formation of the LTTE.

As I have written very recently, the Tamil Tigers attacked military targets and then in 1983, after a military battle that left 13 SLA soldiers dead, saw Tamil civilian neighborhoods burned, and hundred of innocent non-combatants murdered by raging Buddhists. This Tamil tragedy is remembered as ‘Black July’ – marking the attacks carried out by mobs in Sri Lanka which began on 23 July 1983.

I cite this because, after the war raging so long, the LTTE was declared a terrorist group after U.S. President G.W. Bush took office and lost its rights to politically represent itself, as has happened to Hamas in Gaza.

This assessment was given to the LTTE, after hundreds of its own civilians were murdered by civilians in retribution to military action in 1983 – and at many other points in history. The Tamil Tigers began blowing up areas populated with civilians after their own were killed over military action. Never ever were the Tigers worse than the government it battled.

But after 30 years of violent war, and after the LTTE was declared ‘terrorist’, Rajapakse had his license to commit Genocide and he did it with grand fervor; so many old people and children were murdered that any reasonable person, particularly parents, have a very hard time watching it.

The place where the worst killing is blocked from view by Google even though the war is over, Google is obviously bowing to a request from Sri Lanka.

Channel-4 in London busted the Genocide tragedy open last year with Jon Snow’s ‘Sri Lanka’s Killing Fields’ and it was like lancing a festering sore, one Sri Lanka would much preferred to have left scabbed over.

The blood and gore is really unprecedented because it lasted for a long time and affected so many people. Bombs striking the ground, people’s clothing articles in trees because the people’s bodies were literally blown through the trees. They tried to find shelter in trenches that families dug; children screamed and there was little anyone could do at the worst points.

The activity that is forever recorded on YouTube also involved sexual debauchery of the cruelest nature; nude rape/murder victims being loaded into a truck like meaningless cargo, while SLA soldiers joke about wanting to rape them again, one says he, "would like to cut her tits off", and this is recorded on video and widely shown and of course extensively shown and explored in the Channel-4 documentaries. But trying to piece together events (crimes) with locations is a little harder because Google has a big patch over the exact area where the ‘no-fire’ zones were established, it seems too exact to be a coincidence.

In addition to the savage killing and starving of thousands of people, one lie after another from Sri Lanka President Majinda Rajapaksa was exposed and as the layers of their story are peeled away it becomes just like an onion, it makes you cry and if it doesn’t, then I suggest seeing a doctor. I think I’m tough but I can’t make it through the entire documentary without experiencing a tremendous emotional response.

And now Channel-4 has released a follow-up program; Sri Lanka’s Killing Fields: War Crimes Unpunished and few titles have ever been so fitting.

The first program was called a ‘fake’ by overtly angry Lankan officials time and time again, yet everyone knows it is not and that the evidence is sickeningly thick and while the actual number of victims is unknown, some placing the number of dead at only 40,000, I believe it is well over a hundred thousand and that in fact very few of the 160,000 Sri Lankan Tamils who ceased to exist, are actually alive today.

This is because part of the evidence, well reviewed in our reports and the Jon Snow documentaries, involves people being executed after they are in custody, some as they happen and others after the fact. One is the supreme commander of the rebel Tamil Tigers- LTTE (Liberation Tigers of Tamil Eelam), Velupillai Prabhakaran, another is his 12-year old son, and this aspect complicates things for Rajapaksa all the more.