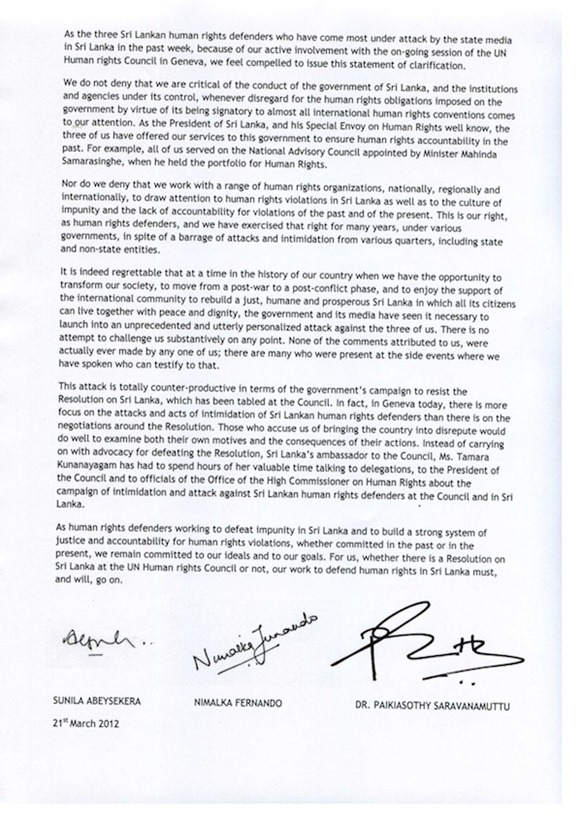 As the three Sri Lankan human rights defenders who have come most under attack by the state media in Sri Lanka in the past week, because of our active involvement with the on-going session of the UN Human rights Council in Geneva, we feel compelled to issue this statement of clarification.

We do not deny that we are critical of the conduct of the government of Sri Lanka, and the institutions and agencies under its control, whenever disregard for the human rights obligations imposed on the government by virtue of its being signatory to almost all international human rights conventions comes to our attention. As the President of Sri Lanka, and his Special Envoy on Human Rights well know, the three of us have offered our services to this government to ensure human rights accountability in the past. For example, all of us served on the National Advisory Council appointed by Minister Mahinda Samarasinghe, when he held the portfolio for Human Rights.

Nor do we deny that we work with a range of human rights organizations, nationally, regionally and internationally, to draw attention to human rights violations in Sri Lanka as well as to the culture of impunity and the lack of accountability for violations of the past and of the present. This is our right, as human rights defenders, and we have exercised that right for many years, under various governments, in spite of a barrage of attacks and intimidation from various quarters, including state and non-state entities.

It is indeed regrettable that at a time in the history of our country when we have the opportunity to transform our society, to move from a post-war to a post-conflict phase, and to enjoy the support of the international community to rebuild a just, humane and prosperous Sri Lanka in which all its citizens can live together with peace and dignity, the government and its media have seen it necessary to launch into an unprecedented and utterly personalized attack against the three of us. There is no attempt to challenge us substantively on any point. None of the comments attributed to us, were actually ever made by any one of us; there are many who were present at the side events where we have spoken who can testify to that.

This attack is totally counter-productive in terms of the government’s campaign to resist the Resolution on Sri Lanka, which has been tabled at the Council. In fact, in Geneva today, there is more focus on the attacks and acts of intimidation of Sri Lankan human rights defenders than there is on the negotiations around the Resolution. Those who accuse us of bringing the country into disrepute would do well to examine both their own motives and the consequences of their actions. Instead of carrying on with advocacy for defeating the Resolution, Sri Lanka’s ambassador to the Council, Ms. Tamara Kunanayagam has had to spend hours of her valuable time talking to delegations, to the President of the Council and to officials of the Office of the High Commissioner on Human Rights about the campaign of intimidation and attack against Sri Lankan human rights defenders at the Council and in Sri Lanka.