Last night Sri Lankan state TV described certain journalists as “traitors” following the UN Human Rights Council’s vote yesterday. Being a journalist, or rather attempting to be a free reporting journalist in Sri Lanka, is dangerous enough. Having your photo on the TV and being labelled a traitor must be petrifying.

Today the threats have become more direct. The outspoken minister Mervyn Silva (pictured below, right) today declared in public: “I am the one who chased Poddala Jayantha (a journalist) from Sri Lanka.” He also named other journalists Sunanda Deshapriya, Nimalka Fernando, Poddala Jayantha and Paikiasothy Saravanamuttu, who he claimed were “traitors”, saying he would break their limbs in public.

“If you get caught by me in Sri Lanka, I will break your limbs in public. I say this responsibly. No matter who conspires against me,” he says to a crowd of demonstrators, and surrounded by journalists and cameras. 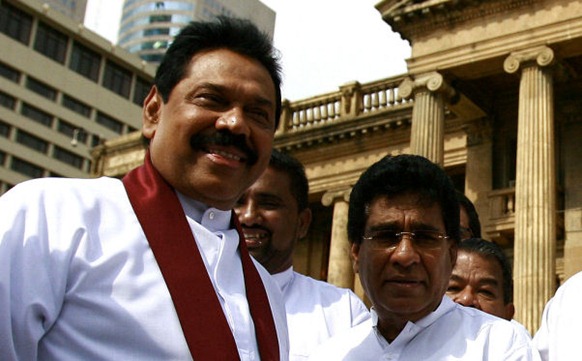 Last Sunday I attended the premiere of Sri Lanka’s Killing fields: War Crimes Unpunished in Geneva with the film’s director and producer, Callum Macrae. The film is a follow-up to Sri Lanka’s Killing Fields, which was broadcast last year and caused major ructions in Sri Lanka and the United Nations, and is cited as a major contributing factor to the UN vote yesterday which called on the country top properly investigate the war crimes charges against it.

Both films and an extensive body of reports by Channel 4 News have examined the evidence of alleged war crimes at the end of Sri Lanka’s civil war in 2009.

After the film was screened, Callum took questions from the floor. There were quite a few Sri Lankans in the auditorium, and many of them were keen to ask questions. Also in the room was a film crew which was paying particular interest to the Sri Lankans asking questions. After a while it became unsettling for those asking to be filmed by people whose identities and motivations were unclear, so we asked if they could identify themselves or stop filming.

There have been repeated reports of intimidation and harassment of exiled Sri Lankan journalists by Sri Lankan diplomats around the world, and the country sent a party of over 100 to the recent Human Rights Council meetings in Geneva.

Today the Committee to Protect Journalists and the United Nations have called on the government in Sri Lanka to stop its intimidation of journalists. “The government of President Mahinda Rajapaksa has a long and alarming record of intolerance to criticism,” said Bob Dietz, CPJ’s Asia programme coordinator.

“The international community must be extra vigilant in ensuring that Sri Lankan journalists are not subjected to reprisals for voicing their concerns to the human rights council.”