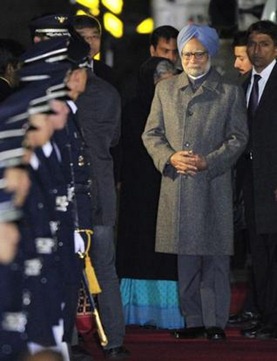 Moving quickly to pre-empt any diplomatic damage that India’s vote against Sri Lanka at the United Nations Human Rights Council on Thursday may cause, Prime Minister Manmohan Singh has written to President Mahinda Rajapaksa, highlighting the “element of balance” that was introduced in the resolution because of Indian efforts.

The letter, which was sent on Friday night, was drafted as a response to Mr. Rajapaksa’s March 19 message to the Prime Minister, in which he had sought India’s support to fend off the U.S.-sponsored resolution.

Dr. Singh recalled India’s firm support for Sri Lanka in its struggle against terrorism. With the end of the conflict against the LTTE in May 2009, he wrote, India believed that an opportunity had arisen to pursue the twin goals of “genuine national reconciliation” and reconstruction of infrastructure destroyed in the long war, and it was committed to helping its southern neighbour achieve these ends.

Briefing reporters about the letter, a senior Indian official said that while Colombo had made good progress in rehabilitation, “on the political process, devolution, things are not moving.” To the extent to which the U.N. resolution encourages Sri Lankan action, it is good, he said. “We have always had a problem with the western approach of telling countries that they ‘must accept’ or ‘must do’ something.” That is why India insisted that the language of the resolution be changed to remove that element,” he added. “Once we got that, we voted for it.”

The Prime Minister’s letter to Mr. Rajapaksa notes that he had instructed the Indian delegation in Geneva “to remain in close contact with its Sri Lanka counterpart in an attempt to find a positive way forward.” India, he said, “spared no effort and [was] successful in introducing an element of balance in the language of the resolution.”

Notwithstanding this redrafting, Indian officials acknowledge that India’s vote could have an impact on relations with Sri Lanka. “There might be unhappiness on all sides, in Sri Lanka because we voted for the resolution, and in the U.S. because we insisted on amending the language. But we have to be consistent in what we believe,” the senior official said.

The Prime Minister’s letter reiterates India’s conviction that “a meaningful devolution package, building upon the 13th Amendment, would lead towards a lasting political settlement [of] … all outstanding issues, in particular the grievances of the Tamil community in Sri Lanka … and create [a] condition in which all citizens of Sri Lanka, irrespective of their ethnicity, can find justice, dignity, equality and self-respect.”