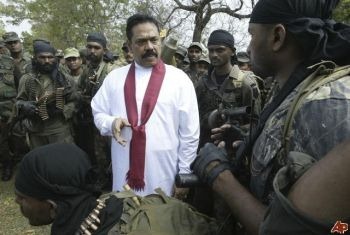 India’s PM Manmohan Singh wrote to Rajapaksa to tell his him that India had tried, at least, to introduce “an element of balance in the language of (a) resolution.”

In the early months of 2009 when Sri Lanka’s war was reaching its final crescendo, frantic calls were made to Colombo by Sri Lankan diplomats at the United Nations headquarters in New York. According to a top Sri Lankan diplomat, some calls were directly to Mahinda Rajapaksa himself, warning the Sri Lankan president that the U.S., Britain and France were contemplating unilateral action against the government for the conduct of its war against the Tamil Tigers.

The Rajapaksa government, poised to claim a decisive victory in the three-decades-old war, was in no mood for outside meddling – though it did accept a helping hand from an old trusted friend. Indian diplomats told supporters of action against Sri Lanka that New Delhi was against any kind of foreign intervention, a move that eased pressure on Colombo considerably. By mid May 2009, just a few months after those frantic calls, the war was over, and the Tigers vanquished.

But a lot can change in three years. Last month, at the meeting of the U.N. Human Rights Council in Geneva, India made a stark departure from its longtime support of its close neighbor and voted in favor of a resolution introduced by the U.S. that calls on Sri Lanka to act on recommendations made by the Sri Lankan government’s own war commission, the Lessons Learnt and Reconciliation Commission (LLRC) that handed over its final report to the President in November 2011 . The U.S. resolution in Geneva passed on March 22 with 24 voting in favor, 15 against and eight abstentions.

After the vote, India’s PM Manmohan Singh wrote to Rajapaksa to tell his him that India had tried, at least, to introduce “an element of balance in the language of (a) resolution.” Nevertheless, India now finds itself in untested territory, both in regards to its relationship with its southern neighbor and its role as a regional power. “India has made a serious diplomatic blunder,” says Shanaka Jayasekara a lecturer at the Center for Policing, Intelligence and Counter Terrorism at Macquarie University. Before the vote, both ruling and opposition politicians in the southern state of Tamil Nadu, which have close ties to Sri Lanka’s Tamil minority, exerted pressure on the Singh government to support the resolution. Against the backdrop of recent election losses for the Congress Party, New Delhi did not want to risk antagonizing a vital ally, says Jayasekera.

Others see India’s distancing itself from its long-term ally in a more strategic light. R. Hariharan, a former intelligence head of the India Peace Keeping Force stationed in northern Sri Lanka in the early 1990s, says the Singh government wanted to send out a signal to Colombo that has been dragging its feet on one of New Delhi’s key requests: to give more power to minority Tamils. “I feel Indian government got cheesed off with Rajapaksa’s prevarication. This was probably an opportunity to remind him that he can’t get away with it,” he says.

(MORE: Why We Should Be Talking About Sri Lanka)

Motivations aside, the decision underscores the struggle for control that has been escalating between the two dominant powers in the region. As accusations of war crimes have been mounted against Colombo, China has not wavered in its support of the Rajapaksa government and was vociferously critical of the U.S.-backed Geneva resolution. And it’s not just political support that China has been sending Colombo’s way. Last year China remained Sri Lanka’s largest donor for the third year running pledging more than $790 million. India’s contribution during the same period was less than 5% of that. Since 2009, China has given Sri Lanka a staggering $ 2.7 billion in aid for infrastructure projects, according to new report on China’s regional role published by Safeworld, a London-based advocacy and research group.

Still, China’s growing interest in Sri Lanka is influenced more by economic realities than political or military power play. The Safeworld report says that 60% of China’s exports and 90% of its energy imports move through the Indian Ocean, where Sri Lanka’s strategic location is vital. Observers say China may have a practical need to stay in Colombo’s good graces, but is unlikely to try and usurp India as the regional power in South Asia. “Perhaps for the time being China has the upper hand,” says Hariharan. But, he says, “The Chinese are realists. I doubt they would be keen to stretch themselves in bid to whittle down Indian influence totally.”

On the ground in Sri Lanka, the passing of the resolution is unlikely to change anything overnight. The government opposes it, and even if it did not, it does not have to report back to the council until early next year. “The effect of the resolution is more symbolic,” says Ruki Fernando, an activist with the national rights body Law and Society Trust. “It shows that the international community is willing to take action on Sri Lanka. The question is how far will it go?”

Another question is whether it’s too late. To avoid intervention in its internal affairs, Sri Lanka needs to act on the LLRC recommendations, present the Human Rights Council an action plan on how it plans to do that, address alleged violations of intentional law and use assistance and resources made available by the office of the U.N. High Commissioner for Human Rights, as per the U.S. resolution. But even if Rajapaksa wanted to move quickly, the challenges now facing the post-war nation would stop him. With the economy in bad shape and the Sri Lankan Rupee slumping, Rajapaksa will be loath to take politically risky gambles. “Now with increasing oil prices and a depreciating rupee, the president may not have the political capital to introduce devolution,” says Jayasekera of Macquarie University. “The window of opportunity was immediately after the war.”

Special thanks to Time Magazine