Around one hundred and fifty uprooted Tamil families of Chinna-vaddai, a village situated in the Poara-theevup-pattu division of Batticaloa district, bordering Uhuna village of Ampaa’rai district, complain that they are being harassed by the Sinhala paramilitary personnel and settlers, who have occupied their village for 22 years, since 1990. A Sinhala electricity worker, who came to the village from Kurunegala two weeks ago, abducted a 17-year-old Tamil girl forcing her to marry him, complain the family of the girl and her relatives. In the meantime, the Sinhala paramilitary men of the ‘Civil Defence Force’ have been harassing the Tamil families, who have recently resettled in the village. The CDF men are plundering fish and vegetables belonging to returnees at gunpoint and are warning the Tamils to vacate the village. 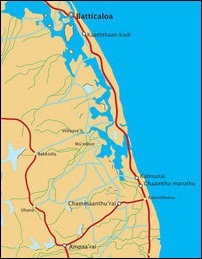 The man who kidnapped the under-age girl was a former CDF paramilitary man and was already married, news sources said.

Another Sinhala paramilitary man has assisted him in kidnapping the Tamil girl.

When the family of the girl rushed to Ma’ndoor police station, seeking help, the Sinhala policemen there refused to assist them or register their complaint. The SL policemen have said that they could not help the family as the ‘couple’ had registered their marriage and ‘ran away’ to Kurunegala.

The resettling Tamil villagers, who had earlier registered themselves as IDPs ever since 1990 at the offices of the concerned Village Officers (GS) and Divisional Secretaries, have been living in the nearby villages of Aanai-kaddiya-ve’li and Puthiya Chinna-veddai. Despite their entries in the registries, the families have not been provided with any humanitarian assistance or any other form of relief by the civil authorities, they complain.

The District Government Agent, Divisional Secretaries, Village Officers and the politicians in the district are reported to have turned deaf ear to their complaints.

In the meantime, complaints have also been made that the Tamil Mixed Government School in the village is functioning without proper management.

The students attend the school from Grade 1 to GCE O/L. However, the teachers only work between 8:30 a.m. to 10:00 a.m., and they vanish from the school every half an hour or so, the parents complain.