What President Obama calls pivoting military strategy on Asia is actually a major shift that will have long term consequences, much more serious than most people, except military analysts, have taken the trouble to ponder. The background, of course, everyone is aware of, and consists of four elements; Asia has become an economic powerhouse and deserves to be treated as the principal global strategic theatre, post the Soviet and East European collapse; commitment to European defence is no longer a priority; thirdly, petro-region states have improved their military muscle and need a nanny less and less, and in any case a southerly thrust from  Russia/Soviet Union is not a worry; finally there is the other elephant in the global chamber, China.

Control of the seas 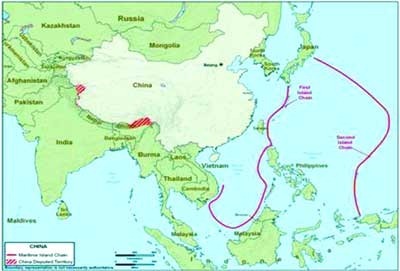 I intend to deal with the topic only to the extent that it affects our surroundings, but even this requires consideration of the bigger picture in the Western Pacific, the South China Sea and the Indian Ocean; yes, it is control of the seas that is going to be the principal theatre. What is vital to understand is that though it is Obama’s wish to engage with, and not isolate China, the outcome, for reasons beyond anyone’s control, will be isolation. This has significance for hopeful Chinese client regimes like the Sri Lankan, and hence deserves careful review.

The build up of Chinese military power is impressive; the air force is being modernized and advanced models are in the pipeline; the army is shifting from mass and might to nerve and intelligence. Major emphasis is given to modernizing the navy, but within a certain limited scope. The plan is to have missile capability to a distance of about 1500km, and naval capability to deny access in the Western Pacific closer than the island chain through Japan, Okinawa, Taiwan, and Luzon (north Philippines), and in all of the South China Sea up to the backwaters of Vietnam and Borneo. What has to be understood is that there is no intention to create a blue-water fleet of aircraft carrier battle groups to contest American supremacy in far flung waters – the implication for the Indian Ocean is obvious, it lies beyond the pale. The reason is cost and time; a nuclear powered super-carrier is pricy, say $4 billion, and a similar outlay on a fleet of supporting ships, and then a few billion on aircraft and training, totalling say $12 billion. Getting two or three such groups fitted out and battle ready is a 30 year perspective. (America has 11 super-carriers, about half operational at any time, and three or four active battle groups called Fleets – Fifth, Seventh, etc., – drifting around the world’s oceans).

What this means is that China is boxed in by unavoidable military logistics. Hence, her absolute priorities are limited to the defence of the Taiwan Straits and thwarting Taiwanese independence, defending her territory and shores, and shielding Chinese trade – that is the inflow of energy and raw materials and the outflow of exports. To protect commercial shipping some naval muscle may have to be projected as far as the Straits of Malacca, but no further.

However, all this guns and bullets stuff is a great deal less important than another reason that cements China’s isolation. Who is going to throw in its strategic towel with China? May be far away Pakistan to a degree, may be insane North Korea, but not even the Rajapaksas, despite their penchant for deluding themselves. Countries all over Asia, Africa and as far as South America have excellent trade and investment relations with China, but pulling out a gun! No, no thank you sir! The Americans have a network of alliances and relationships across the region – Japan, South Korea, Australia, the Philippines, Thailand, Singapore, Malaysia and India. Then there is Vietnam which is leaning towards military rapport, which if not pro-American, is at least anti-China. Schizophrenic Pakistan is deep in adultery with both partners.

China is isolated politically and strategically, but not only because of mistakes such as throwing its weight around in the Parcel and Spratly regions and demanding exclusive control of the oil rich South China Sea to within a few kilometres of other littoral states. No, I believe there is another and deeper reason. When an opaque and non-democratic state extends its power, others recoil in fear. Bloody old America, with all its warts and social breakdown, its inequity and half-mad Congress, and no end of internal messiness, is an open society. This is less frightening to others. It is not the type of challenge that a closed society can fight off; hence the isolation and unintended encirclement of China, if she becomes militarily powerful, cannot be avoided.

China is also finding itself increasingly isolated, or in a small recalcitrant residue of one or two, in international forums. She holds the fort in support of authoritarian regimes – Gaddafi, Syria’s Assad, Mugabe, Sudan’s al Bashir, and Rajapaksa. I wonder whether Beijing can reverse this style anytime soon.

America, compared to what it used to be, is broke, so it will have to insist that the costs of the pivot be shared. Japan is not likely to repeal the pacifist Article 9 of its Constitution, but defence expenditure is yenning up; India has pushed its defence component up to 17% of the budget. Australia is likely to meet most costs incurred, except salaries, of the 2000 marines being deployed in Darwin. Instead of a pivot with America at the fulcrum, networks of semi-independent relationships are developing in different parts of the Asian theatre. There is one that will be crucial in our front and backyards; India will become the sergeant major in the Indian Ocean and as far as the Vietnam coast, as will Japan in the Western Pacific, and Australia in the South Pacific. This is the strategic shape of the coming decades in the littoral oceans of the Far East and South Asia.

Sri Lanka must stop deluding itself that a knight in shining Chinese armour will come riding to its rescue if it decides to flex its muscle imaging that this big boy is standing just behind. China is a global economic giant, but its military posture for a few more decades – that is well beyond the physical and political lifetime of the Rajapaksa clan – will be defensive. She will be a source of funds for large infrastructure projects, useful ones and white elephants, and a raised hand when a Security Council veto is implored; but don’t ask for the impossible. Don’t ask for sampans to come peddling into Hambantota harbour ready to sink the Seventh Fleet, or fend off Indian sabre rattling. The best thing for Lanka to do is to stop putting all its eggs in a Chinese basket, and while indeed maximizing this relationship, also reach out and strengthen trade and economic ties across Asia.