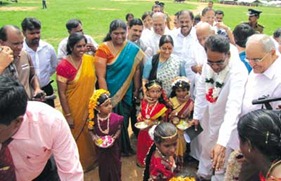 Visiting leader of opposition in the Indian Lower House of parliament – Lok Sabha, Sushma Swaraj winding up her MP-delegation’s tour of Sri Lanka, urged the government and the TNA to fully engage the possibility for a genuine political settlement regarding the Tamil issue in the country. She stated that the Sri Lankan government must implement 13 Amendment Plus, ‘which means devolution of power and beyond,’ she said. She also reiterated India’s commitment to remain closely engaged with the Mahinda Rajapaksa administration to effectively advance the process of rehabilitation, reconstruction and national development.

Ms. Swaraj described the so called national issue of Sri Lanka (the Tamil issue), as one that must be delicately handled by all parties involved in finding  a lasting solution, and that all possible measures towards that end should be taken in consensus with the parties involved. She said the visiting Indian delegation had held talks with the president, opposition leader and politicians from both the government and opposition ranks, including the TNA. Here are some of the views she expressed on behalf of her delegation: 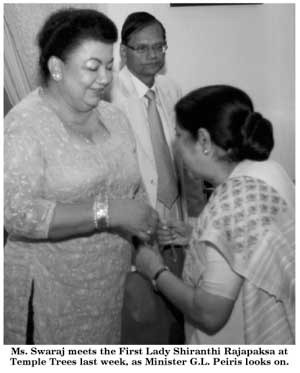 On progress in the North:

Ms. Swaraj commented that they also toured the North in the company of top government ministers and had seen for themselves the resettlement process, and the development initiatives that have been undertaken by the Sri Lankan government since the end of hostilities between the LTTE and the security forces in May 2009.

On a ‘political solution:’

She said that during their (the delegation’s) deliberations with president Rajapaksa, they had stressed the need for devolution of powers to Tamil-speaking provinces. She said that they had also met with all mainstream political parties in the country during their stint here, and that they had particularly taken cognizance of the need for Colombo to commit itself to a lasting solution to the Tamil national question, through dialogue.

On the Geneva Resolution:

On the president’s commitment:

Asked whether the Sri Lanka president had been genuine in his commitment to a possible devolution of power as means of a solution to the national issue, the Indian leader of the opposition noted that she was optimistic that Colombo was committed to reach a solution. She commented that the same positive signals were forthcoming even when she had held talks with her Sri Lanka counterpart Ranil Wickremasingha, but was quick to emphasize that everybody should be committed towards a solution  and see to it that           there is no stalemate in the process.

When the president had said ‘but we cannot bring them (the TNA into  a workable solution/talks) by force,’ she says she  replied, ‘then you can bring them by persuasion.’

On militarization in the north:

Sushma Swaraj added that president Rajapaksa had expressed his intention to gradually move out the military presence from the North-East, but she noted that military presence should also be systematically reduced allowing the population in the two Provinces to return to normal civilian life.

She remarked that the government had expressed its willingness to implement certain proposals mooted in the LLRC report, and that hence it was up to the UPFA government to honour its commitment to reach a political settlement.

On the Tamil Nadu pullout:

Last week’s sensational story was no doubt the visit of the Indian Parliamentary delegation. It was reported almost everywhere that some of the refugees wanted — let us  say —  the good offices of India to help them. This was reported almost as an article of faith in most places, but the fact is that refugees would ask for help from anybody who comes along, so has this got anything special to do with India?