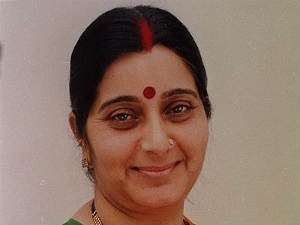 Sri Lanka must address the issue of reconciliation with the Tamil minority in the country with "a sense of urgency", Leader of Opposition in Lok Sabha Sushma Swaraj said in Colombo.

Swaraj, who is leading a 12-member Indian parliamentary delegation in Colombo, said she had told Sri Lankan President Mahinda Rajapaksa that the current stalemate and the deadlock on the talks with the main Tamil party, Tamil National Alliance (TNA) over the parliamentary select committee process must be broken.

She said both TNA and the main opposition UNP must be persuaded to join the talks.

The Indian parliamentary delegation’s six-day visit to Sri Lanka was aimed at looking at Sri Lanka’s resettlement and reconciliation work since the conflict with the LTTE ended three years ago.

The delegation was also checking on India assisted infrastructure development projects in the former battle zones.

"We have brought out clearly the need for expeditious implementation of the measures proposed by the LLRC with regard to information on missing persons and detainees, investigation of cases of disappearances and abductions," she said.

"It is important that these are pursued with a sense of urgency. This is the message we have conveyed to our Sri Lankan friends".

On the issue of demilitarising the former battle zones in the north and east, Swaraj said the Sri Lankan president had promised to ensure that military did not interfere with the civilian life.

To a question on the resettlement of the conflict displaced, Swaraj said she saw for herself one village.