Indian embassy officials, SJV Chelvanayakam’s son, SC Chandrahasan, who was long operating in Chennai reportedly with the backing of Indian intelligence agencies, and C. Rajadurai from Batticaloa who defected the Tamil national cause in the late 1970s to join with Sinhala parties, were conspicuous participants at the 35th death anniversary of Thanthai Chelva observed at his memorial in Jaffna on Thursday. The current TNA parliamentarians were absent in the gathering. TNA’s former MP, Sivajilingam, who paid homage at the memorial before the event, showed black flag to C. Rajadurai, saying that traitors should never be entertained unless they repent for their actions. Political observers suspect New Delhi using the event for a leadership endorsement of faces from the north and east agreeable to its designs. 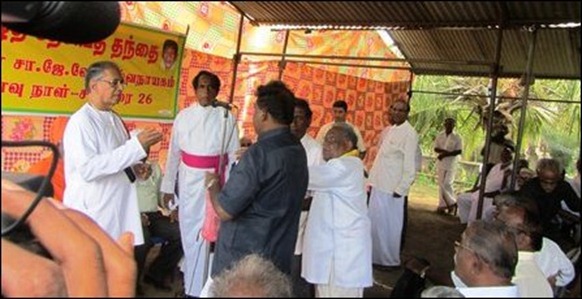 India may have its plans of creating a political niche for Chandrahasan by bringing him down now from Chennai, political observers in Jaffna said.

The Deputy Indian High Commissioner Mr. Rajamanikam has come from Kandy to participate the Chelva event in Jaffna on Thursday. He was one of those garlanding the statue of Chelvanakyakam. 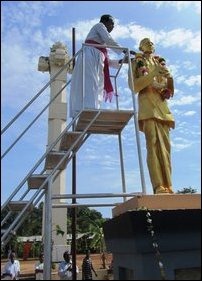 The memorial event started with garlanding the statue by the dignitaries present. Later, led by the special guest, 83-year-old, C. Rajadurai, flowers were strewn in homage on the tomb of Thanthai Chelva.

Attended by several hundreds, the memorial meeting took place in a stage and shed erected for the occasion at that place, facing the esplanade of the Jaffna Fort.

When the president of the Chelva Trust and retired Bishop of the American Mission Church in Jaffna, Rt. Rev. Jebanesan finished his welcome speech, Mr. Sivajilingam who entered the scene with his supporters showed black flags to Mr. Rajadurai and said that traitors like Rajadurai has no place in such occasions.

Rajadurai should have asked for forgiveness at the tomb of Chelvanayakam, Sivajilingam said. 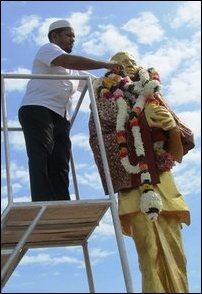 Leaving the shed at the request of senior ITAK participants, Sivajilingam spoke at length to reporters outside.

The very Rajadurai who now sits in the podium defected the polity of Chelvanayakam and he was a minister in the Colombo government when the ‘Prevention of Terrorism Act’ was enacted, when the Jaffna Public Library was burnt, when the 1983 pogrom took place and when the emergency regulations under which all atrocities took place were being regularly extended. Even after retirement in 1989, he was serving the Colombo government as its ambassador in Malaysia, Sivalilingam pointed out.

I only wanted to register the protest against inviting such people and I have done it. The trustees of the Chelva memorial event were told of the sentiments in advance. I had no intention of disturbing an event for Thanthai Selva, the former TNA parliamentarian and TELO leader told reporters. 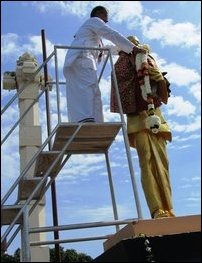 Why the Trustees invited Rajadurai amidst protests, Sivajilingam was wondering expressing his suspicions.

Sivajilingam’s bold protest braving heavy presence of SL military was much appreciated by the public and secretly appreciated by many who came for the occasion, who said that their presence was for the sake of Thanthai Selva and not for the conspicuous faces that were brought for the event.

Many Muslim dignitaries and academics like Prof. SK Sitrampalam and Prof R. Sivachandran were among those who were present to pay homage to Chelva on Thursday. 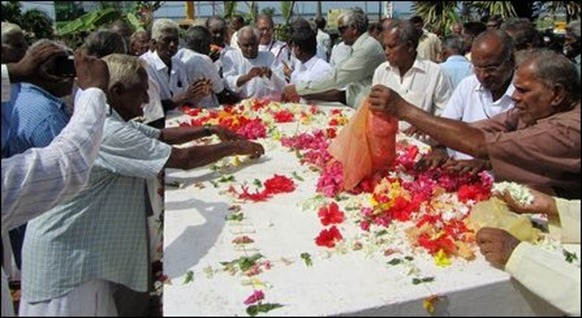