A photograph in which TNA leader Sampathan and UNP leader Ranil Wikremasinghe hold the Lion Flag of the genocidal state of Sri Lanka together, during the May Day rally in Jaffna, Tuesday, has caused much sensation in the island and outside. While the programme was at its height and the show of solidarity was entering into photographic sessions, all of a sudden Ranil produced the Lion Flag and wanted Sampathan to hold it, observers to the programme said. While the UNP has brought down around 10,000 Sinhalese from the south, on the TNA’s side, only less than a hundred, that too only the members of the civic bodies participated the procession and meeting, news sources in Jaffna said. 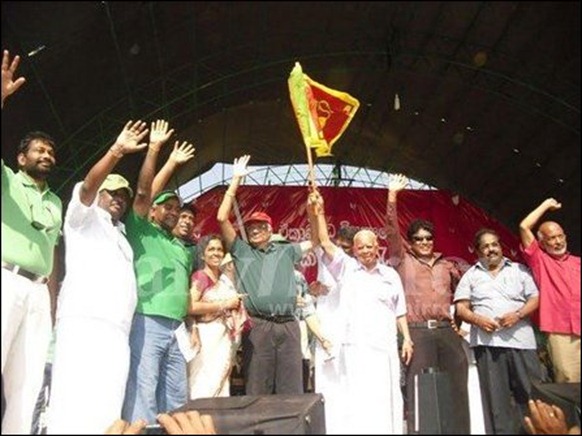 The photo of Sampanthan and Ranil holding the Lion flag highlighted in the Colombo media [Photo courtesy: Daily Mirror]

The current situation is such that the Tamil leadership should concentrate on proving its credentials in the formation of a secular state in the North and East as an alternative to the Sinhala-Buddhist genocidal state, by uniting all the Tamil-speaking people, i.e., Hindus, Muslims and Christians, and by guaranteeing the safety of the Sinhala-Buddhists in the north and east as well.

But instead of attending to the needs and opportunities provided by the times, sections of Tamil leadership falling prey to the agenda of New Delhi and Washington try to ‘rediscover’ unity of genocidal Sri Lanka through Colombo-centric ‘cosmopolitanism’, political observers in Jaffna said.

Orchestrated by the powers, similar hijacks in the name of Tamil political parties take place in the diaspora as well, commented diaspora political circles in the UK, citing current exercises by some elements in the UK known for their association with the intelligence services of the powers and Colombo’s diplomatic mission in London.

How long such orchestrations, hijacks and deviations could tread on the subjugated people and could supress the people’s uprising for liberation, wonder the vast majority of Eezham Tamils silently watching the unfolding dramas. 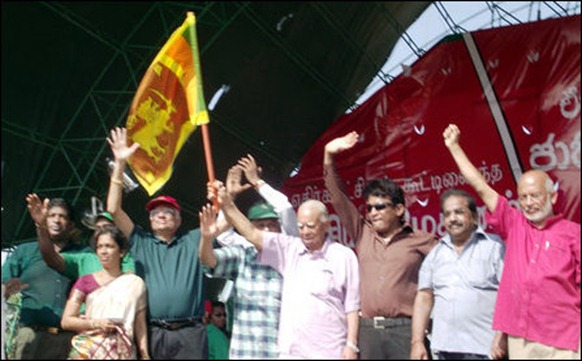 The sequence of UNP, TNA leaders waving to the crowd and the appearance of the Lion flag [Photos: TamilNet]