(By Ajaz Ashraf) After India’s vote against Sri Lanka at the UNHCR, Southasian states can no longer count on New Delhi’s centrality in formulating Indian foreign policy.

In the veritable swirl of conspiracy theories emanating from Colombo on why India voted against Sri Lanka in the United Nations Human Rights Council (UNHRC) in March, the most compelling as well as ostensibly tenable one links New Delhi’s decision to its fear of China. In that theory, China’s growing role in the economy of the Emerald Isle of the East goaded New Delhi into using its vote in the UNHRC to warn Sri Lankan President Mahinda Rajapaksa – he could step out from under the Indian umbrella at his own peril.

Conspiracy theories often reveal more about the psychology of their promoters than about the contested facts and decisions themselves. The Indian vote has dismayed Colombo to no end, and even though it has been a month since the US-sponsored resolution was passed in Geneva, the Lankan political class and media have not tired of trying to rationalise New Delhi’s decision to their satisfaction, without indicting Sri Lanka in any way. One of their theories is arrant nonsense: that the Manmohan Singh government voted at the behest of Congress president Sonia Gandhi, who was distressed by pictures showing the dead body of LTTE chief Velupillai Prabhakaran’s 13-year-old son Balachandran.

The disappointment in Sri Lanka stems from erroneous assumptions made while crafting its policy to counter the UNHCR resolution. For months before the vote, New Delhi had been reminding Rajapaksa to initiate a political settlement with his country’s alienated Tamil population – an agreement which would presumably have devolved power to the North and East, once the bastions of the LTTE. But Rajapaksa equivocated to stall the settlement, not caring to display credible intent even after New Delhi communicated to his government that it was taking a serious look at the US-sponsored resolution. But it was more a case of Colombo getting its assumptions wrong than of being caught napping. For one, it perhaps banked on India’s avowed opposition to country-specific resolutions that are intrusive, dilute national sovereignty, and question a government’s conduct of domestic policies. The Indian government upholds this policy for very many good reasons of its own, not least to deflect foreign criticism of Indian policies in Kashmir, the Northeast and Maoist-affected areas, which are draconian and in gross violation of all tenets of human rights.

More significantly, Rajapaksa believed that he could use the threat of closer Sri Lankan alignment with China to guarantee a favourable Indian vote in Geneva. China’s stunning rise in the Sri Lankan economy is best illustrated by its emergence as Sri Lanka’s biggest lender in 2010, with loans amounting to USD 824 million. Add to this Beijing’s role in developing Sri Lanka’s infrastructure, particularly the Hambantota port, which by 2020 will have facilities to simultaneously berth 33 ships and is expected to attract 20 percent of worldwide maritime traffic. All these are fodder for the rather jingoistic, Sinophobic and didactic Indian media, which spins alarming stories on Sri Lanka becoming yet another pearl in the Chinese necklace girding India. Could a hemmed-in, paranoid India risk displeasing Sri Lanka and pushing it into a tighter Chinese embrace? Rajapaksa thought not. 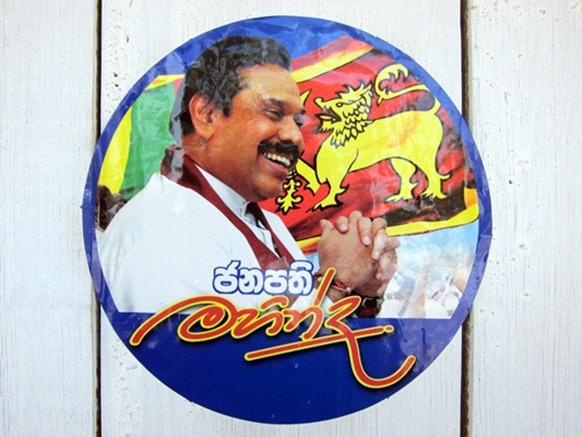 Rajapaksa has fallen back on strident nationalism.

Right across the border

No Indian leader or diplomat will ever state it on record, but the Indian vote in Geneva was partially aimed at disabusing Rajapaksa of the value of his ‘China card’. Though much bandied about, the threat of Chinese incursion has yet to acquire the requisite heft for India to ignore its own domestic compulsions. New Delhi feels secure in the knowledge that in the immediate future, in no small part because of the region’s geography, Colombo simply cannot do without India. Sample some of these figures – India accounts for a fifth of Sri Lanka’s imports, totalling USD 4.4 billion in 2011, as against China’s USD 1.2 billion; India is Sri Lanka’s largest foreign investor; every fifth foreign tourist in Sri Lanka is Indian; and the list can go on and on. Rajapaksa seems to have forgotten that diplomacy rarely entails ignoring current exigencies because of the fear of future losses.

This is particularly true of the government in New Delhi, dependent as it is on its coalition partners for survival and stability. Manmohan Singh, indeed, could not have ignored the pressure from his coalition partner, the Dravida Munnetra Kazhagam (DMK), which, because of its base in Tamil Nadu, had been smarting at the Sri Lankan government’s dilly-dallying on the Tamil question. Colombo’s conspiracy theorists have given little salience to this factor, citing India’s vote in favour of the UNHRC resolution of 2009 to bolster their point. But they forget that India voted favourably only after significant amendments to the 2009 resolution made it simultaneously palatable to both the DMK and Sri Lanka. Rajapaksa’s failure to move credibly towards a political settlement with Sri Lankan Tamils since then meant that this time around the DMK and other Tamil Nadu parties could not have been mollified without displeasing Sri Lanka.

The DMK’s influence over India’s vote in the UNHRC holds a lesson for other Southasian countries too: in crafting their foreign policy, India’s neighbours must now assume the continuation of coalition politics in New Delhi, and must factor in the rise of ‘little leaders’ outside New Delhi, particularly in those Indian states with which they share a border. Lacking a pan-India appeal and with their influence mostly confined to a single state, these ‘little leaders’ have no option but to respond to the interests and anxieties of the people who vote them to power. They have compulsions quite different from New Delhi’s and are inclined to view issues from local rather than national perspectives.

Their influence on foreign policy is palpable. Sample some recent developments: West Bengal Chief Minister Mamata Banerjee vetoed Prime Minister Manmohan Singh’s proposal to share Teesta water with Bangladesh last year; two sailors from an Italian ship, the Enrica Lexie, were recently arrested for killing two fishermen from Kerala lest the issue become a volatile factor in that state’s by-election, which the Congress-led state government needed to win in order to bolster the party’s strength in the national assembly; stiff popular opposition has prevented the French company Areva from starting work on new nuclear power reactors in Jaitapur, Maharashtra; and South Korean giant Posco’s steel project in Orissa is grounded because the Union Government has withheld environment clearance under great pressure from Adivasis and civil society.

Southasian countries should no longer believe that their foreign policy goals can be achieved solely through arrangements with Indian leaders in New Delhi. Nor should the examples cited above make them shudder at the new complications in their policies toward India. These new dynamics have promoted more inclusive regional diplomacy. For instance, the interests of and affinities between the two Punjabs have injected a new verve into Indo-Pak relations. Similarly, the Indian prime minister thought it sagacious to invite the chief ministers of the three border states of Meghalaya, Mizoram and Assam on his trip to Bangladesh last year. It is only to be expected that chief ministers from the Northeast will accompany Manmohan Singh when he visits Burma. In this climate of liberalised economy, coalition politics and ‘little leaders’, chief ministers of various Indian states have been flying around the world to directly woo foreign investors instead of waiting for the Centre to lure them to their states.