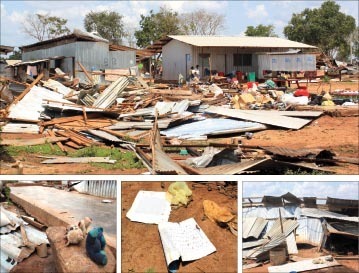 Indian-born Raksha is a student of the Graduate Institute in Geneva, where she is preparing to write her dissertation. She was in Chettikulam the day after a cyclone damaged 942 shelters in Zone 1 of the Menik Farm IDP camp on March 31. News reports said the situation was under control, with all the shelters speedily built, but Raksha was there to witness the direct aftermath of the storm.

‘It was a bad situation,’ she says. She visited the nearby hospital where she found people who had been injured by the sudden gusting winds. An electricity pole had fallen on one house, and a mother and daughter found themselves ‘stuck’ together and electrocuted, she said.

Another male patient had been admitted after the roof collapsed on his chest, while yet another was getting stitches in his head.

Meanwhile, Zone 1 was in an even worse state, Raksha said. The tin roofs of many of the houses were on the ground. Many of the women did not put up their roofs immediately, choosing instead to dry their wet clothes on them. Worse, may of the rations had been destroyed, and the people Raksha spoke to had not eaten a meal last night or the morning after the storm. It was only around 2 pm that several NGO trucks rolled in to Zone 1, bringing much-needed supplies.

The school which was attended by the camp’s children was completely flattened, and the church too was destroyed. The ground was strewn with items from myriad households.

Yet, the people Raksha spoke to did not want their houses to be built.

‘Let us go home,’ some of them begged, ‘We’ve been living here for three years now. We want to die in our own villages.’

Many of the people living in the Menik Farm camp hail from Mullaitivu. The town saw some of the most intense phases of fighting during the war. While the official stance is that the areas have to be properly de-mined before people can return home, the frightened and paranoid people living in the camps don’t believe this version. Those who have been given permission to leave the camp for short periods returned to their home villages to find all their worldly possessions gone, and are angry that none of the forces took the trouble to secure them.

‘I don’t think these women felt any happiness when they saw that the houses in the camps were up again,’ Raksha said.

Several of the inmates of the camp were resentful for another reason.

Towards the end of March, they were all asked to sign a blank sheet of paper before accepting their rations. They were not told why their signatures were needed. Later, they found out that they had unwittingly signed a petition against the US resolution. In any case, the inmates told Raksha that the food quality was so bad that they often sold off the rations to local traders, in exchange for more edible fare.

During her travels, Raksha also visited Vavuniya, Mannar and Jaffna, as part of her study on how women cope with running a household in the North, and the economic and social problems they face. She met with over 40 women, some from towns and some from more rural areas.

What she found was an enduring resentment mixed with fear for the military. Many accused Army personnel of taking their goods without paying for them.

In Jaffna, for instance, a restaurant owner said that a policeman came in every week, twice a week, often with a group of ten. The group sometimes ate food worth as much as LKR 18,000, but walked out without paying. The Jaffna mayor too ate at different restaurants every day, also without paying.

Struggling in the Villages

For most of the areas, the biggest, most insurmountable problem was the rising cost of living. This is particularly bad in the villages. For them, even traveling by bus is getting too expensive. In fact, even basic facilities such as education and food items are becoming more and more costly. The villagers find themselves trapped, unable to visit the nearest towns. Not just because of the expense of traveling by bus- women living on their own are afraid to leave their children alone as well, and so miss out on job opportunities.

In Anaivelanthan, near Kilinochchi, Raksha met a mother who was too sick to walk, who also had to take care of a crippled daughter- and who was surviving even without any way of making a living. Anaivelanthan cannot really be described as a town, just a few streets and a huge Army camp next door. Most of the people there are engaged in casual labour. Some are employed by the Church, or depend on the kindness of relatives. ‘They hope that if one house gets money, they will share. It is day-to-day survival for these people,’ Raksha said. In Ramanadapuram, also near Kilinochchi, fishermen in the area found their source of livelihood threatened by the construction of an Air Force camp in the area, blocking their access to that part of the sea. ‘When you ask them about their future, they can’t think about it. They are trained to not think of the future, but just to survive for the day,’ Raksha said. While it was unfair to say that all of the people in the North were bereft of livelihood, (there were many who worked as teachers or farmers) many of the people suffered in grinding poverty. Meanwhile, the problem of finding counseling for the people who have suffered so much was almost ignored, she said. Access to medical facilities is often limited in these areas. Raksha spoke to a woman in Ramanadapuram whose son had a kidney problem, forcing her to travel to Colombo every month, by bus. Another had a daughter who periodically had to be hospitalised due to her severe asthma. Many of these women pawned their wedding jewellery in order to make some money for the trips. Raksha spoke glowingly of the women she met; of their ingenuity and resourcefulness in the face of such hardship. ‘I have a lot of respect for them. I’m amazed that they are surviving, mainly because of this social safety net.’ For Raksha, and others living in Colombo in relative comfort, it is a reminder that civilians in the North are still beset with problems- both economic and social. For them, it is still a daily struggle.