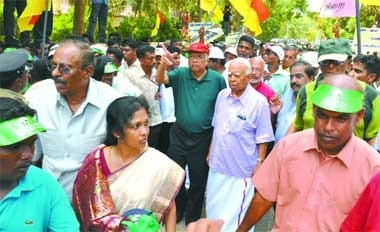 The fractured UNP May Day celebrations notwithstanding, the fact that there was a Ranil-Karu division within the party did not take away entirety from the fact that the UNP was ‘trying something’ by having the May Day rally in Jaffna.

Ranil Wickremesinghe making a speech at the joint TNA UNP event, said that there must be a home grown solution to the so called ethnic imbroglio.

Quite apart from that, there was the entire fracas about the fact that the state ITN TV channel showed some rally-goers waving the LTTE flag at the UNP event.

Apparently, or so the narrative goes, there were two diehards who wanted to show the ‘middle finger’ to the state TV channel, by waving the LTTE flag at a UNP May Day event.

That may very well have been the intention, but the fact was that the flag waving absolutely devastated the UNP May Day agenda, with the government going to town on the incident.

Elsewhere you can read that the president speculated as to whether the flag waving was done by the Premadasa faction, or anybody slightly pro government to discredit the Wickremesinghe led UNP! However eventually everybody around the president agreed that we have to accept Ranil’s version in that case.(!)

Well, Ranil’s version, or the official party version was that it was all a set up to discredit the party. But the fact remains that this is not very convincing, given that everybody knows the culprits were apprehended and allowed to go their own way, because everyone thought it was a over-exuberant prank on the part of some diehard Tamil extremist types.

They may have been having fun – but this is precisely the problem. The waving of an LTTE flag for whatever reason will make the UNP’s case extremely difficult come election time when the UPFA is bound to go to town with the flag waving fiasco.

The government’s May Day rally meanwhile may have been successful enough under the circumstances, when a jacking up of gas and milk food prices immediately followed the rally – something that possibly was known by some of the Ministers participating.

But, it’s on the external affairs front that the government continues to face daunting challenges which is why the UNP sees a hawk-eye opportunity to exploit the government’s weak link by capitalizing on the concerns of the foreign lobby – which coincides with the plank of the TNA, which by and large, still has a command over people’s representation in Jaffna.

It’s why the government seemed to be determined to make some difference to the prevailing status quo as far as the post Geneva issues are concerned. On the one hand, there has been the quit order on Sri Lanka’s permanent representative in Geneva, Tamara Kunanayagam.

On the other, Professor G.L. Peiris announced that there will be a dedicated outfit under the command of the president’s secretary, to implement recommendations of the Lessons Learnt and Reconciliation Commission.

Both moves indicate that there is some determination on the part of the government to stave off the UNP gambit to have the May Day rally in Jaffna, tap into international disaffection over Sri Lanka, misplaced though it may be, and ride to power on the coattails or the Verti frill of the Jaffna Tamils.