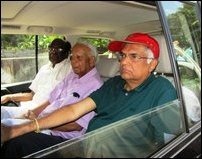 Ranil Wickremesinghe must be definitely the world-beater at splitting parties. He split his own UNP down the middle, and that’s history now.

But now he is in the process of splitting the Tamil National Alliance down the middle too, by allegedly giving party leader R. Sambadan a flag to wave at the UNP-TNA joint May Day rally in Jaffna!

Sambandan’s flag waving has got the party hawks such as Mavai Senathirajah incensed, though Sambandan himself has said he has no qualms about waving the national flag, as the act does not go contrary to his principles.

However Sambadan is for a ‘united’ Sri Lanka he has always said, and he probably sees the futility of doing national politics with Ranil Wickremesinghe and hoping to aspire to positions in a future government, while eschewing any organic connection to the Sri Lankan state. In other words, there is no point trying to get into the Sri Lankan parliament pretending to by something other than Sri Lankan.

Sambandan’s political project may be different in the long term. He sees an alliance with the UNP as un-damaging to the TNA’s allies in the Tamil diaspora etc., because in many ways the UNP are fellow travelers.

Has no charisma He sees that by getting into government piggy-backing on UNP votes in the future, he has a chance of leveraging things in a way that suits the diaspora agenda.

However, the big loser in the entre thing seems to be the UNP. How many votes is the UNP going to lose as a result of this alliance, in the majority south?

Plenty. But with the population in the north down to a paltry 900,000 or so due to migration and war, the net gain due to the TNA alliance, for the UNP, is not phenomenal.

In a situation in which the governing UPFA is bound to go for a presidential poll first in the future, the popular vote under these circumstances is poised to favour the governing party, factoring in the vote losses for the UNP and the marginal gain of Tamil votes due to the UNP-TNA alliance.

Ranil Wickremesinghe also probably made the calculation to ally with the TNA, living the past.

He would have had in his mind his performance at the 2005 presidential election at which had the Wanni votes come in if Prabhakaran’s boycott had not take place, he would have won, even by a whisker.

What he does not factor in, is the fact that the dynamics of the entire calculus has changed. A vast swathe of the majority has begun to believe after the UNP’s general attitude towards the war against the LTTE, that Ranil Wickremesighe is a ‘traitor.’

Moreover, after the Rajapaksas vanquished the LTTE, the mood is to see the TNA as LTTE quislings, never to be tolerated. So its easy to see the dynamic has changed, but Wicremesinghe, knowing that he has no charisma to secure political traction in the South, sees a ‘repeat’ of the 2005 dynamic as his one last hope for becoming president.

As for the government — a future presidential election seems to be farthest from the mind of the president. He seems keener to get the North Central provincial council elections held ahead of time, so that it could be a show of strength with all government power focused in one province.

Everybody knows this president loves elections – and winding up the NPC seems to be a way of winning the elections thereafter by exercising all heft, and then saying ‘look who said we were losing ground due to the cost of living?’’

However, the president will have to unravel the court challenge first, now that the elections commissioner has been enjoined from conducting the poll. However, this is a situation that probably the government can get over, with the battery of legal minds at its disposal.