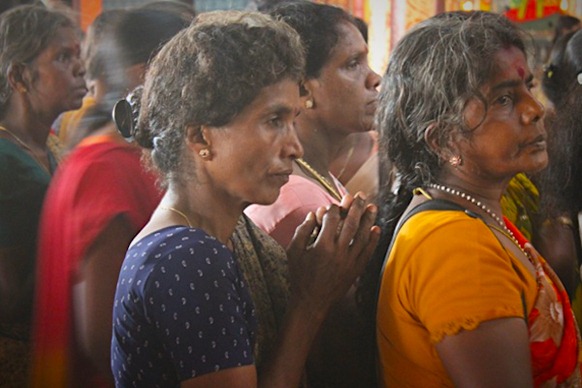 For the 3rd successive year, the Sri Lankan government has made elaborate arrangements to celebrate the end of the war in Colombo. This year, May was declared as “war hero’s commemoration month”. For the last few days, roads were closed in Colombo causing great inconvenience, as preparations were being made for celebrating the end of the war.

However, in the North, among Tamils, where the last phase of the war was fought, the mood was far from celebratory, but outright mourning and grieving. In the morning of 18th May, I joined a commemorative Mass in a church that was yet to be rebuilt after the war. More than the church building, two monuments stood out. One for Fr. Sarathjeevan (popularly known as Fr. Sara, who died on 18th May 2009) and another for all people who had been killed in the war. Villagers including school children and Hindus flocked to this church. Amongst those present were families of those killed and disappeared. About 20 priests participated. After the Mass,  flowers and garlands were laid for those killed. A Tamil priest from Jaffna welcomed the small group of Sinhalese from Negombo, Colombo, Anuradhapura etc., who had joined the mourning and the simple commemoration, while most other Sinhalese were seen celebrating.

In the afternoon of 18th May, I witnessed the passion of women whose family members had disappeared and been killed, as they gathered at a Hindu Kovil in Killinochchi town and participated in a service there, which included the smashing of coconuts. Some of the women were crying and some were clearly angry with those that had killed or made their family members disappear. I would not want to be at the receiving end of such anger.

In the evening, I joined other friends in a solemn event in Jaffna to commemorate the 3rd year after the end of the war after by remembering those killed and disappeared. All of us lit candles and some shared their tragic stories of those killed and disappeared. Several mourned also for the lack of space to even cry and remember without fear, with one boy thanking the organizers of the event, as several others he had spoken to organize such an event had refused in fear.   Another woman, whose brother had died on 18thMay 2009, spoke of the tension with which they participate in these events, as they are fearful to hold them in public.

One of the organizers of the Jaffna event spoke of the challenge he faces every year in May to organize a commemoration. His fears were clearly grounded and real.

On 17th May evening, some unknown persons had inquired about him and his activities. The priest in whose church the commemorative event was held on the morning of 18th May in Vanni was also questioned by the Army the previous day about what services and activities were planned. On 18th May morning, the Secretary of the Jaffna University Students Union was attacked and was seriously injured. A friend told us that he was in the accident ward of the Jaffna hospital while we were there.

In another interior rural village close to Jaffna, Army personnel had twice visited a Catholic Priest and threatened him not to have any special masses between 18th – 20th May. In their 2nd visit, they had told the Priest he can have mass, but that he shouldn’t pray for those killed in the last phase of the war, as all those killed had been LTTE cadres. There had been no answer when the Priest asked whether the 1-2 year old children killed and elders over 60 years who had been killed were also LTTE cadres.  Some months ago, threats by the Army had compelled the same priest to scrap the plan to build a tomb to remember all those killed in the war and didn’t have a tomb or a burial place. On 27th November 2011, the Army had insisted that lamps  not be lit  and bells should not be rung in Churches and Kovils in the North and in some places, and had even threatened Catholic Priests not to celebrate the Sunday Mass! (Perhaps ignorant that Sunday Mass is celebrated in churches all over Sri Lanka and over the world for hundreds of years). Outside the Killinochchi Hindu Kovil that the families of disappeared and killed had gathered, there was a significant Police and Army presence and one of my friends recognized an intelligence officer who was photographing us and watched us as we got into our van after joining the Kovil event. By coincidence or not, in the next few minutes, our vehicle was stopped at a check point and subjected to registration and questioning which was not at all usual in my previous travels in the North this year.

The Presidential Commission of Inquiry (LLRC) had recommended that a special event on National Day (4th February) be set apart to express solidarity and empathy with all victims of the tragic conflict, but this was ignored by the Government.

And the military appeared to be doing its best to discourage and stop any religious or non religious events related to remembering the dead and disappeared, to grieve and mourn. The intimidation and threatening of organizers of such initiatives are alarming.

But I did have something to celebrate also – the courage, creativity and perseverance of those who dared to build small monuments, organize and participate in memorials events to grieve and mourn for those killed, disappeared and who have suffered. It is this courage  and creativity i believe that will lead us to reconciliation.