A unique temple of Eezham Tamil folk heritage, dedicated to Kooddaththaar, a deity historically worshipped by a soldier guild that got absorbed into the toddy-tapping community, was found destroyed in bombing and its rare bronze idol sawed off and stolen at the Vasanthapuram locality of I’lavaalai in Jaffna. For the last two decades the locality was under the ‘High Security Zone’ (HSZ) of the occupying Sinhala military. Recently, when some fringes of the HSZ were allowed for resettlement, the people of Vasanthapuram returned. Finding their temple destroyed and the deity missing they now worship only the pedestal remaining. Vasanthapuram is where the occupying military has built lines of a few monotype houses for the resettled people and often shows them off to visiting foreign dignitaries as an example of its ‘reconciliation’ efforts. 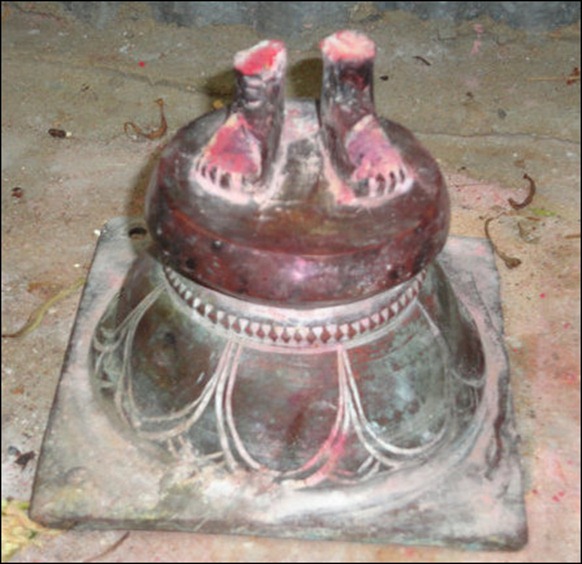 The rare bronze image of the deity Kooddaththaar found sawed off in the Sinhala Army-occupied ‘High Security Zone’ at I’lavaalai in Jaffna. The image of the collective deity of the Tamil guild of soldiers of the ancient times, was in anthropomorphic form. Note that despite the idol missing, the local Tamil devotees have applied saffron in reverence to the the remaining part. [Image courtesy: History Department, University of Jaffna]

The destruction and desecration of the Kooddaththaar temple was brought to light when a media team from Virakesari led by Ms Uma Prakash, joining with Professor P. Pushparatnam and Ms Sasitha Kumaradevan of the Jaffna University History Department, undertook a survey and documentation of the temples in the resettled parts of the HSZ in Valikaamam North.

Writing a feature in Virakesari on Sunday, Professor Pushparatnam elucidated on the historical, religious and social significance behind the heritage of the temple.

Bringing out the present conditions in the locality, he said that areas interior to the main roads are beyond recognition with scrub jungle and ruined buildings.

He records an interesting observation that the emotional priority of the resettled people is to first rebuild their temples than to rebuild their houses.

Noting that the coral-stone-built Kooddaththaar temple was one of the many structures destroyed in bombing during the war, and noting that besides the main bronze image there were also other images missing from the temple, Pushparatnam says, people have now placed stones to represent the various other deities and worship them.

The bronze image of the deity Kooddaththaar was in anthropomorphic form with just two hands wielding weapons, Pushparatnam cited an old-generation person earlier associated with the temple.

In explaining the cult of Kooddaththaar, Pushparatnam cited Dr. P. Ragupathy assigning it to the hero-worship cult of the soldier guilds.

When contacted by TamilNet, Dr. Ragupathy said Kooddaththaar, A’n’namaar, Cheavukar and Padaikkalar found in the folk religion of Eezham Tamils are deities of collective hero-worship, originating from the soldier guilds of historical times. The collectiveness in the concept could be seen in the plural form used for the names of the deities: Kooddaththaar (members of the guild), A’n’namaar (from A’n’nalmaar, meaning leaders or those who have become gods), Cheavukar (soldiers), Padaikkalar (those who wield weapons), he pointed out. Collectiveness of a community personified into a deity is an alternative idea of religion found only at folk levels, he further said.

The soldier guilds, associated with the protection of trade guilds and rulers of the past, were also cultivators or craftsmen in peacetimes. In the medieval times, especially in the late medieval times, they were also hired and migrated to far and wide places in South and Southeast Asia. With the collapse of native trade and state institutions, the soldier guilds were absorbed into various castes and professions.

Vaiyaa-paadal, a historiographical literature of the times of the Kingdom of Jaffna lists the names of a number of soldier groups that have come to Jaffna from various parts of South Asia and even from West Asia and Africa. The literature also notes the absorption of some of them into certain castes. The same phenomenon and associated religious cults could be found in the Sinhala heritage too.

Ragupathy, citing his teacher the late Mr T. Shanmugasundaram a doyen of Eezham Tamil folklore, said that the deity Kooddaththaar was worshipped by Paa’laik-kaththip-pa’l’lar who got absorbed into the caste of Na’lavar, engaged in toddy-tapping today. According to Yaazhppaa’na Vaipava Maalai, a historiographical work of the Dutch times, another soldier guild called Kaththikkaara-nampika’l was also absorbed into the Na’lavar community. 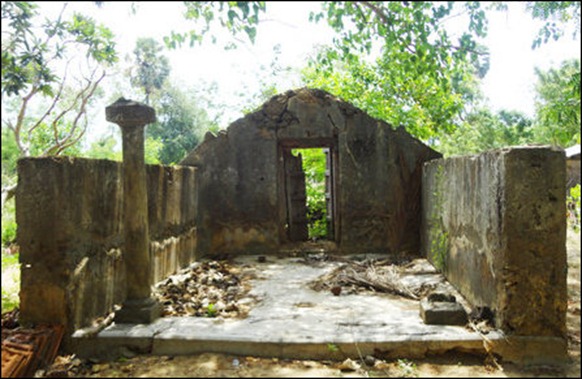 The Kooddaththaar Temple of I’lavaalai, found destroyed in the ‘High Security Zone’ occupied by the Sinhala Army in the last two decades [Image courtesy: History Department, University of Jaffna]

Mr. N. Rajaratnum, a Jaffna University graduate coming from a nearby place of Vasanthapuram and now living in Montreal, told TamilNet that the locality of the Kooddaththaar temple was actually called Chingkaththin-kaadu and not Vasanthapuram.

Vasanthapuram is a modern name given in the late 1950s to a colony for landless people started at a nearby place then called Pokka’naik-kaadu, Rajaratnam said.

According to him, in the 1980s the patrons of the Kooddaththaar temple were just around 15 families of the Na’lavar community, but they all were traditionally owning land there.

At a close-by distance, in a locality called Ma’nal Adaippu, there was an A’n’namaar temple and a settlement of the Pa’l’lar. Animal sacrifice used to take place in both the temples. The sacrifice at the Kooddaththaar temple took place on the 8th day of the festival of Kava’naavaththai Vayiravar temple, which was then well known for animal sacrifice. The practice has been stopped in all the folk temples of the surroundings a few decades ago, Rajaratnam further said.

Professor Pushparatnam notes that the devotees of Kooddaththaar wish to rebuild the temple in the same name, without giving room to a trend Sanskritizing names and concepts of deities.

The loss of the bronze image of Kooddaththaar, a rare iconographic example to find in a folk tradition, is an emotional loss to the concerned people and in a wider anthropological and aesthetic sense an irredeemable loss to the heritage studies of Eezham Tamils.

However, the larger question and a more important issue is, what inspirations are now going to give a new meaning to such old religious traditions to benefit the identity and social mobility of the concerned people to prosperity, and a new meaning for the Eezham Tamils to discover wider heritage to their nation-building.

Such issues are hotly debated in Tamil Nadu nowadays for the resurgence and mobility of the subaltern. Eezham Tamils have an elite, worldwide diaspora of all shades of their communities to pool their brains and resources together. Vision in social and cultural issues is the foundation for political liberation. It is time to start thinking. 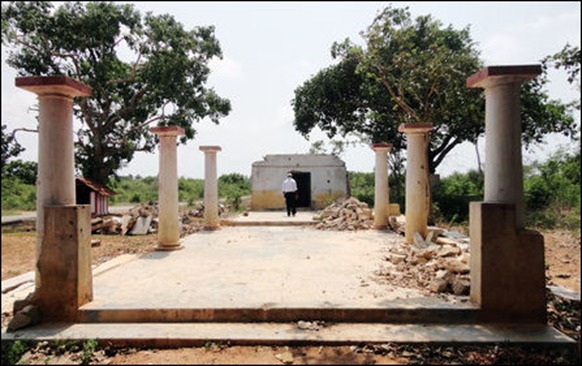 Another nearby temple for Vayiravar found destroyed in bombing in the HSZ, I’lavaalai [Image courtesy: History Department, University of Jaffna]