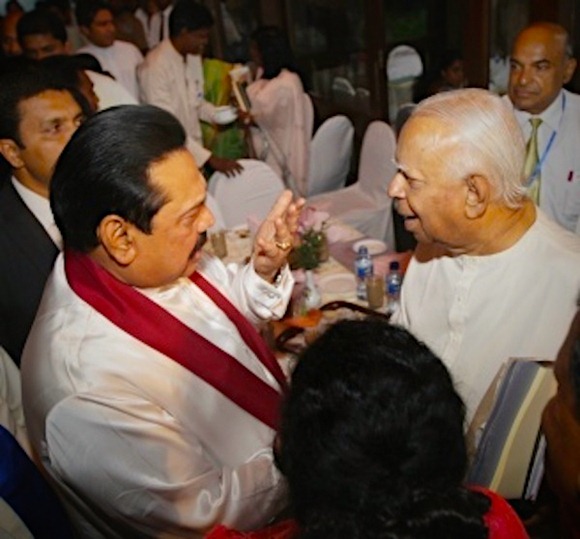 Professor Urmila Phadnis the late doyenne of Lankanology in Indian academia was utterly discerning when she concluded over two decades ago in her last book (‘Ethnicity and nation-building in South Asia’) that Lankan Tamil ‘sub-nationalism’ was unique in the region in that it alone displayed an ‘autonomist-secessionist continuum’.

It was with shock and dismay that I found that the keynote speech of R Sampanthan at the 14th Convention of the ITAK in May 2012, echoes in significant respects those of Velupillai Prabhakaran, to the extent that that there are near-identical passages. Here is a single sample:

“The world does not revolve around the axis of justice. The freedom struggles of persecuted communities are not measured on the scales of justice. Global powers that preach of Democracy and Human Rights are themselves not the epitome of justice. We do not expect governments around the world and international organizations that support them to take pity on us, sacrifice their interests, and ensure that our rights are given to us.” That’s Mr. R Sampanthan, at the ITAK 14th Convention, May 2012.

Now ladies and gentlemen, here’s Mr V. Prabhakaran: “We are fully aware that the world is not rotating on the axis of human justice. Every country in this world advances its own interests. It is the economic and trade interests that determine the order of the present world, not the moral law of justice nor the rights of people. International relations and diplomacy between countries are determined by such interests. Therefore we cannot expect an immediate recognition of the moral legitimacy of our cause by the international community.” That’s from the Maha Veera day Address of November 1993.

Mr Sampanthan, the most prominent local leader of the Northern Tamil community, which exists a few miles away from the sub-regional landmass, reiterates his party’s commitment to achieving with the support of the international community, the same ‘soaring aspirations’ that could not be achieved through armed struggle. He asserts—some would say confirms—that ‘the international community’, through its current stance, may open the space for the achievement of that goal: “…The current practices of the international community may give us an opportunity to achieve, without the loss of life, the soaring aspirations we were unable to achieve by armed force.” (R. Sampanthan, speech at ITAK 14th Annual Convention, Batticaloa, May 2012, Colombo Telegraph)

Plainly the ‘soaring aspiration’ is that of Tamil Eelam. He calls for the restoration of the degree of sovereignty that the Tamil people are said to have enjoyed over 500 years ago, prior to the advent of colonialism.  This refers to a completely independent political existence. “…Up to 500 years ago, the Tamil people established their own governments, and governed themselves.  Our party symbolizes a time in history…during which our people had their own sovereign Tamil governments…Our fundamental objective is to regain our community’s Home, its historical habitat and its sovereignty. The symbol of the House symbolizes this unshakeable aim…”  (Ibid)

If the world were to be re-ordered by restoring the status quo ante of no less than half a millennium; if every minority of roughly a million people or a small fraction of a country’s citizenry, were to demand this right and seek its exercise, the world would be plunged into anarchy, chaos, bloodshed. This project cannot be entertained.

Mr Sampanthan’s transparent declaration of tactics could have been critique or caricature penned by a Sinhala chauvinist, and had it been authored by a Sinhalese, would have been dubbed ‘racist stereotyping’ (even by me). “…The softening of our stance concerning certain issues, and the compromise we show in other issues, are diplomatic strategies to ensure that we do not alienate the international community. They are not indications that we have abandoned our fundamental objectives…In other words – we must prove to the international community that we will never be able to realize our rights within a united Sri Lanka… Although the issue at hand is the same, the prevailing conditions are different. The struggle is the same, but the approaches we employ are different. Our aim is the same, but our strategies are different. The players are the same, but the alliances are different. That is the nature of the Tamil people. Although we still have the same aim, the methods we use are now different…” (Ibid)

How then is one to apply the policy of containment to the Tamil secessionist temptation? It is far too risky to transfer provincial powers through an election to a party which openly declares that it not only dismisses the 13th amendment as solution; but also dismisses the unitary state as a framework and actually believes that a solution is not possible within a united Sri Lanka. It strategizes to convince the world community of that fact. In short it hopes to convince the world community that a solution for the Tamils is possible only outside a united Sri Lanka, i.e. in a separate, independent state. If such a party takes power in a Provincial Council it will doubtless feel impelled to push for more from the outset; to create situations of tension and confrontation while it uses the Council as a base for external recognition, which it will doubtless obtain from some quarters and to some degree. The Council may become a beachhead for external forces. If Colombo dissolves an adventurist provincial administration some external elements (such as a legislative assembly of co-ethnics in the sub-region) may recognise the boundaries/borders of the dissolved provincial unit as a basis for an independent state or transitional administration. This is how the former USSR and Yugoslavia broke up.

Similarly and conversely, it is imprudent in the extreme to abolish the existing Constitutional provisions for autonomy, unless it is as part of and superseded by an agreement with all parliamentary parties, including crucially, the main Tamil party. Here we are speaking of a successful outcome of the hoped-for Parliamentary Select Committee process. Unless that happens it is imperative to retain the status quo and avoid the deadly mistake that Milosevic was tempted to make, namely the constitutional revision that abolished the autonomous status of Kosovo which the Tito Constitution had provided. The Serbian ultranationalists regarded Marshal Josip Broz Tito as a (Croatian) Communist who had given away the historic rights of the majority Serbs. In pushing through the reversal of the autonomous status of Kosovo as a province of (within) Serbia, they lost their country a few years later and experienced the state of Yugoslavia forcibly shrunk through externally supported secession and military intervention, to Serbia alone.

The doctrine of containment of Tamil proto-secessionism has necessarily to consist of strong positive reforms. There must be a serious change in the nature and functioning of our state and society through a purposive shift to a policy of integration (not assimilation), the recognition and practice of pluralism, equal rights, non-discrimination, multiculturalism and meritocracy. Enlightened self-interest dictates enlightened reform.