Gen. Fonseka was freed, not because Mahinda got a sudden urge to embrace democracy. The former Army Commander and defeated presidential candidate Sarath Fonseka was incarcerated for more than two and a half years. Hence his release appears as one of the populist moves made by the present regime, at a time when its democratic credentials are being exposed even internationally and the jailing of the General was seen in many quarters, both local and foreign, as an act of political revenge. As far as the middle classes are concerned that stigma has been, to a great extent, lifted with the presidential pardon. 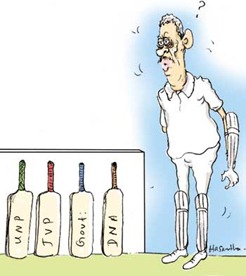 The partial nature of pardon indicates that it was made grudgingly, and under pressure, both local and international.  However it is very clear that the Mahinda regime expects a political advantage from this micro sympathetic act. One thing is clear; the General is not willing to come under the hegemony of the Ranil -Sampanthan leadership. He has already indirectly attacked the developing UNP-TNA understanding.

Whatever the reason, the Fonseka pardon is a positive measure, not just because it enabled the former army commander to return to his family, but also because it indicates the power of national and international mass pressure. It is true that the Mahinda regime is a vassal state of global powers, but it is a mistake to think that the release of General Fonseka and the agreement to implement LLRC recommendations are entirely due to western pressure. Mahinda was defeated by the recent protests of the proletariat; he had to retreat when challenged by the fishermen; he had to abandon many projects due to struggles of students. The protest of the VV in Jaffna was some thing that he did not expect. Radical breakaways from the JVP moving towards the left that accept the right of self determination, is a surprise to many. Revolutionary forces are still not very significant; but they are significant enough to create ruptures in the main political movements.

The ‘detailed reconciliation plan’ of  Mahinda ,which the US Secretary of State praised as ‘good’, will be   disclosed to the Lankan parliament and people in the coming period, once the icing  is added to the cake! Clearly Ms. Clinton knew that the Mahinda regime had concealed the ‘plan’ from the Lankan people, because she reportedly urged Minister Peiris to make it public in both local languages. Mahinda agreed to that. On the other hand he   declared to the Sinhala public, that army camps will not be withdrawn. Also, he did not mention devolution and said nothing about anti Muslim pogroms initiated by pro government Buddhist monks. Clearly there is a growing contradiction within the Mahinda regime. While a crisis has crept into the ranks of the Mahinda regime, Ranil has made a strong alliance with the TNA backed by the Muslim congress. It is in this context that the VV in Jaffna became important. True, that it was not an oppositional unity among the poor, oppressed and the minorities; but it was clearly a nightmare for the regime. Mahinda gang responded with such venom to the VV May Day in Jaffna because it was a model of a distant united mass action.

Some believe that release of general Sarath has created a new challenge to the opposition. A key issue that will determine the political future of the General is likely to be the manner in which he deals with the LLRC report. Will he agree to an independent inquiry on war crimes allegations against Lanka? This is one of the important issues that have preoccupied Tamil Diaspora groups, the western governments and human rights organizations. It may be recalled that in November 2009, before he had declared his intention to enter the presidential race but after his falling-out with Mahinda,  that he visited  US and had discussions with important people. There is still some mystery as to what exactly transpired during that visit. When he came back he was firmly committed to a right wing political programme close to the UNP. Though he opposed Mahinda, politically there was not much of a difference. Basically, he condemned Mahinda for fraud and dishonesty. What is his political, economic and social programme?  Will he agree to the anti chauvinist social democratic programme successfully pursued by Ranil or will he opt to compromise with Sinhala chauvinism?