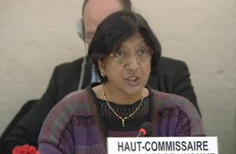 While claiming that Sri Lanka will continue to engage with the UN mechanism despite the setbacks following the Resolution on Sri Lanka at the 19th Human Rights Council session in Geneva, the Sri Lankan government has invited UN High Commissioner for Human Rights Navanethem Pillay to visit Sri Lanka in order to get firsthand information about the ground situation.

“We are hopeful that the invitation extended in April 2011 to the High Commissioner to visit Sri Lanka, will be availed of, to ascertain firsthand the many positive developments on the ground, following the end of the terrorist conflict,” the Sri Lankan delegation in Geneva said.

We take note of the High Commissioner’s Report, and in keeping with Sri Lanka’s policy of continuous engagement, I take this opportunity to inform the Council of the developments taking place in Sri Lanka at this juncture of its post conflict phase.

With regard to the resettlement of IDPs, those that remain to be resettled have reduced further to 6,022, from the original number of over 290,000 in May 2009.  This resettlement process in envisaged to be completed in the near future, as demining progresses.

The demining of former conflict-affected areas is progressing apace, and of the estimated 2,061.53 Sq. KMs contaminated with land mines & UXOs, 1,936.80 Sq. KMs, of the area has been cleared. 70% of this demining work was carried out by the Sri Lanka Army and less than 124 Sq. KMs remain to be cleared. This we believe is a remarkable achievement in any post-conflict situation. Priority has been given to clearing residential areas in villages identified for resettlement and livelihood purposes.

With regard to the rehabilitation and reintegration of ex-combatants, from approximately 12,000, at present 10,949 have been reintegrated into society, while 629 are undergoing rehabilitation, and 403 are under legal procedure or remand. This includes 594 LTTE child soldiers, who were rehabilitated and returned to their families within one year. The Government of Sri Lanka adhered to a policy of treating all these children as victims and not perpetrators, therefore, all possible efforts have been taken to look into their welfare and future.

I am pleased to inform this Council that Sri Lanka has now been delisted by the UN Secretary-General from Annex II of the UN Security Council Resolution 1612, on Children and Armed Conflict. This is a result of the sincere efforts taken by the GOSL inter alia to investigate several cases on child recruitment and comply with the recommendations of the Security Council Working Group on Children and Armed Conflict and the UNSG’s Special Representative.

Our investments in the welfare of our Children today, are the best guarantee of a better and peaceful future for our Nation. Therefore it is gratifying to note the acknowledgement by the President and members of the UNICEF Executive Board, upon concluding an assessment Mission to Sri Lanka early this year.  They observed that Sri Lanka has made rapid strides since the end of the conflict, and that progress can be attributed to its sustained efforts on behalf of children. In this context, the President of the UNICEF Executive Board Ambassador Kamau of Kenya said and I quote, “What was amazing to some of us was that during that civil war, the Government of Sri Lanka remained committed and made great efforts at continuing to support children…. They still sent money for vaccinations, for support to basic education and so forth, which was really a remarkable thing,”

“If you look at the basic indicators of Sri Lanka today, despite the – as I said – very difficult history of the last 30-odd years, Sri Lanka has clearly some of the best child health indicators in their region, and this is a remarkable achievement. There are lessons to be learnt here.” Unquote.

There has been a continued chorus from a section of the international community alleging excessive presence of military in the North. However, I wish to state that with the termination of military operations the strength of the military in the North has been reduced considerably.  The present level in the Jaffna Peninsula is approximately 20,000. Further rationalization of this presence would be considered in line with national security interests. It may be noted that the role of the military in the North today is confined to security related matters. Further, considered efforts have been taken as part of the post-war re-deployment strategy in line with the national reconciliation process which has therefore resulted in the reduction of the High Security Zones by 40%.

At present, 1,133 officials of Tamil ethnicity are serving in the Sri Lanka Police Department and 436 of these officers have been assigned to the North, while 377 serve in the East.  A database containing details of arrested suspects including detainees has been established in order to facilitate their Next of Kin (NoK) to obtain details. Wide publicity has been given in all three languages regarding access to the database by the NoK and 2,582 inquiries have been processed to date.

As informed to the Council during the previous session, the National Action Plan for the Promotion and Protection of Human Rights (NHRAP), which was approved in September 2011, is being implemented and monitored by a national committee of implementing agencies. This Action Plan was developed through a consultative process involving civil society and Government.

As a part of the re-democratization of the North, civil administration has been established at the grassroots level after local government elections were held and local bodies elected. The Census in the Northern Province has been completed, and Provincial Council elections for the North will follow.  The Census is essential for ascertaining the status of the population in that region, and was conducted by the Department of Census and Statistics using Tamil government officers serving in the Northern Province.

I wish to point out that the action presently detailed was undertaken, within the rubric of reconciliation, and well before the adoption of the ill-conceived Resolution on Sri Lanka at the 19th session.  Therefore, Sri Lanka continues to believe that this Resolution was completely unnecessary and unwarranted. It does not add any value to the ongoing domestic efforts. On the contrary, this action has caused mistrust about international processes among the people of Sri Lanka and runs counter to our domestic efforts. We are mindful of these concerns of our people, and will therefore resolutely pursue a home grown solution on reconciliation which has their endorsement. Considering the gamut of changes that the country has undergone in the post-conflict scenario, it is paramount that Sri Lanka is provided time and space to overcome its own challenges.

To expedite implementation, this process is directed by the Presidential Secretariat under the purview of the Secretary to the President. There are 135 main recommendations, with sub areas, thereby totaling 285. For ease of processing implementation, the Government’s approach has been to designate them under four categories, namely those recommendations relating to national policy; the final phase of the conflict; human rights and security issues; and on resettlement, development and humanitarian issues. Furthermore, while some recommendations would be implemented through the Parliamentary Select Committee (PSC) others would be by the relevant institutions.  The recommendations are dealt with under short, medium and long terms, and will be implemented in a structured manner through prioritization determined by the interests of the country and its people, in order to achieve sustainable peace and reconciliation through its domestic process.

With regard to the workings of the Human Rights Council, Sri Lanka is of the view that country specific action in the Council, such as the Resolution on Sri Lanka at the 19th Session, is a highly selective and arbitrary process which is not governed by objective norms or criteria of any kind. We are also conscious of the very real danger of such action setting a precedent which enables ad hoc intervention by some countries in the internal affairs of other nations. It is our firm belief that it is vitally important for the structures and procedures of multilateral organizations to be uniform and consistent, and devoid of discrimination. In addition to this, the mechanisms of the Council should be utilized with greater transparency.

Despite these setbacks, Sri Lanka will continue to proactively and voluntarily engage with UN mechanisms including Special Procedures, Treaty Bodies and the UPR, as we have done in the past, to provide the international community with a comprehensive update on the related developments.

We are hopeful that the invitation extended in April 2011 to the High Commissioner to visit Sri Lanka, will be availed of, to ascertain firsthand the many positive developments on the ground, following the end of the terrorist conflict.

As ever, Madam President, we assure you of our fullest cooperation in conducting the work of this session.