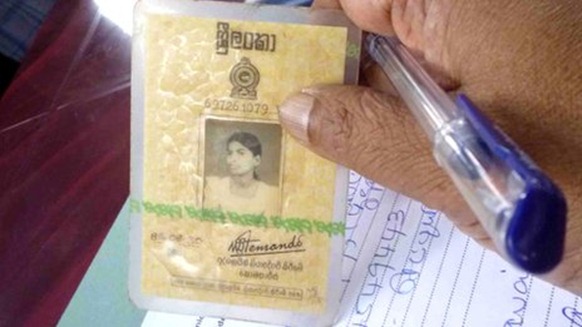 Without a national identity card, many Tamils in Sri Lanka cannot avail of basic services and it makes them suspect in the eyes of the police, writes Ponniah Manikavasagam of the BBC’s Tamil service.

In a remote and dusty part of Kilinochchi district in the Tamil-dominated northern Sri Lanka, people gather around a group of officials working with an election monitoring service called the People’s Action for Free and Fair Elections (Paffrel).

Sitting in the shade, out of the fierce mid-day heat, officials from Paffrel, along with various government and non-governmental organisations, discuss with local people the status of their National Identity Cards (NIC), a document which is a legal requirement for all citizens of 16 years or over.

Tens of thousands of people were displaced in 2009 in the final chapter of the long conflict between the rebel Liberation Tigers of Tamil Eelam (LTTE) and the Sri Lankan military.

Many of them were trying to flee to safety in the ever shrinking area that separated the two warring sides.

One of them, a 54-year-old Tamil woman called Douglas Sugi, described how she tried to cross a lagoon in a narrow coastal strip with two injured children.

"The situation was so terrible and we couldn’t take anything in bags. I had my National Identity Card pinned to my clothes and I did not want to lose it. But while we were moving, the NIC got soaked and broke into two pieces. Now I am here to apply for a new one," she says.

Introduced in 1972, the NIC has become a big issue for those in northern Sri Lanka who have either lost or damaged their identity cards.

Non-governmental organisations estimate the numbers to be in excess of 100,000 people.

Without the card, you cannot open a bank account or even if you have an account, you cannot cash a cheque or withdraw money.

And for those who lived in areas outside of government control, there was never any question of having a government identity card.

"The LTTE was not like the army as they didn’t insist on the NIC. Therefore, there was no importance for it there," says Tamil resident Mudiyappu Mariyaseeli.

But, it also meant that Tamils who had no identity cards and travelled to other areas of the country were a suspect in the eyes of the Sri Lankan military.

That is exactly what happened to Yoganthan Mayooran, 27, who was caught in a search operation by the army during the war.

"I didn’t have an NIC. They arrested me on suspicion of belonging to the LTTE. I was interrogated for six days and released only after the village headman in our area authorised in writing that I had no connections to the LTTE," Mr Mayooran says.

For Tamils in the former conflict zone now wanting to get their NIC, there are also issues around documentation.

Many do not have birth certificates, essential for applying for the cards.

"I have faced many problems without the NIC and I am unable to apply for it without a birth certificate," says Selvarajah Leelawathi.

"I am unable to travel to the capital, Colombo, and even towns like Vavuniya. As I don’t have the NIC, I can’t open a bank account and I can’t even sell my jewellery to get money for emergency needs," she adds. 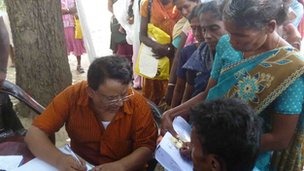 The importance of the card is the reason why groups like Paffrel are sending out mobile services all over the Northern Province to help those who have lost their birth, death or marriage certificates.

The man in charge of the mobile service, Sritharan Sabanayagam, points out that for Sri Lanka’s minorities, the card can be a double-edged sword reflecting, as it does, their insecurities about the position in post-war Sri Lanka.

"During the war, it was very useful for minorities travelling from the conflict area to southern districts," he says.

"But it also makes it easy for extremists to identify Tamils and minorities as their details appear in both Sinhala and Tamil languages. This is not the case with the majority community, whose details only appear in Sinhala. It is the bad side of the card."

But officials reject this argument, saying the benefits of the card outweigh these concerns.

Officials are, in fact, planning to issue a new modernised card to people mainly, they say, to prevent fraud and tackle crime.