Activists belonging to Links Socialistische Partij (LSP), a leftist political organization in Belgium and civil society activists expressed their solidarity with the struggle of the Eezham Tamils at a public meeting on Tamil culture and history held at Steenokkerzee, a municipality in the Flemish Brabant province, on Saturday. Speaking at the meeting, Geert Gool, Antwerpen member of the LSP said systematic injustices have been committed on the Eezham Tamils and urged the Government of Belgium to change its stance on Tamils struggle. The Mayor of Steenokkerzee, Karen Servranckx, was also present at the event.

Speaking at the event, Mr Geert Gool further explained how the funds from the international community, channeled through the Sri Lankan state for the welfare of the Tamils, get diverted to other projects.

The LSP politician said it was time for Belgium to reconsider how to assist the Tamils and to take a principled stand expressing support to Tamils democratic struggle.

The meeting was organized by the Tamil Cultural Organization, Belgium and TYO-Belgium. Besides presenting Tamil cultural-shows and food to the attendees, the organisors also highlighted the historical aspects of the Tamil struggle. 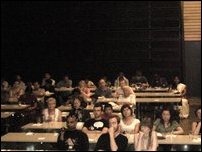 Thanabalasingam Umbeswaram of TYO in Belgium presented the history of Tamil struggle explaining how a genocidal unitary state system was ‘evolved’ in the island. Giving background on the systematic State-sponsored Sinhala colonization of Tamil homeland he explained that the Sri Lankan state was changing the demography and destroying the territorial integrity of the Tamil country.

The TYO activist, explaining the Mu’l’ivaaykkaal genocide, urged the global community to come forward to defend the sovereignty of the Eezham Tamils and recognize that the call for independence by Eezham Tamils is a legitimate claim. “A meaningful way to assert this is to push for a referendum to be held in the North and East of the island,” he told TamilNet after the conclusion of the event.