Demonstrating outside the Indian High Commission at India Place, London, Tamils in the UK demanded the immediate release of the detained inmates of the Chengalpet (Chengkal-paddu) ‘special camp’ and for the closure of that facility. Separate petitions submitted by TCC-UK to the UNHCR and the Indian High Commission called for a revision in the Indian approach to Eezham Tamil refugees in India. “Right now our priority is to shut down these special camps. Apart from that we can’t expect much from India but we need the various agencies of the UN to communicate with each other to clarify that the isolated incidents witnessed by each when seen together is actually facilitating the genocide of the Eezham Tamil nation,” Sivatharshan Sivakumaravel, an activist from TCC-UK told TamilNet. 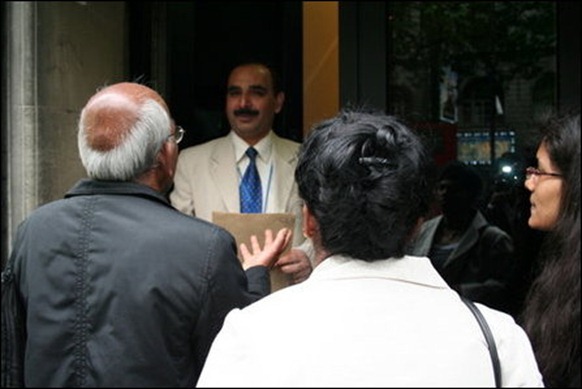 Demonstrators at the protest organized by the TCC-UK, supporting the demands of the hunger strikers at Chengalpet, urged India to comply with the standards of the UNHCR.

The petition submitted to the Indian High Commission, addressed to the state government of Tamil Nadu, urged TN to “take brave measures in addressing Eelam Tamil refugees, beginning with the immediate closure of all ‘special camps’”, also suggesting the development of robust mechanisms to ensure Tamil refugees are gives rights as enshrined in the 1951 refugee convention and its 1967 protocol. 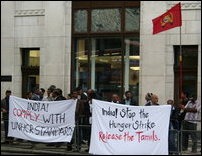 Likewise the petition submitted to the UNHCR, which noted India’s role in assisting Sri Lanka’s colonization of the Tamil homeland, called on the UN to ensure the shutting down of such detention camps in TN, free access of NGOs in all refugee camps, and to protect the fundamental human rights of the Eezham Tamil refugees.

PDF: Petition handed over to the Indian High Commission in UK

Meanwhile, the remaining inmates of Chengalpet camp have also joined the hunger strikers owing to no positive response from the government. Though 4 of the illegally detained inmates have been released over Sunday and Monday, the fate of the remaining is still uncertain.

PDF: Petition to the London office of UNHCR

Thirteen others may be released owing to pressures from the protests, in accordance with earlier promises, but the current hunger strike protest aims at nothing less than the closure of such illegal detention facilities and release of all inmates, informed sources from Chengalpet told TamilNet.

A prayer meeting for the hunger strikers is to be conducted tomorrow evening jointly by different Tamil Nadu political parties and civil society groups near Thiruvalluvar statue, at Mylapore.

The demonstration gains significance in the context of India that complicited a genocidal war and continue to abet the structural genocide against Eezham Tamils in the island, being elected to the UNHRC committee to monitor ‘progress’ in the island, commented Tamil diaspora activists.

The media in India, especially in Tamil Nadu, is calculatedly deviated to focus attention on dummy personalities in the island when the master culprits are within India, the activists further said.

India is not a signatory to the international conventions on refugees, even though it had made use of the issue of refugees in the secession of Bangladesh.

For more than half a century, and more than quarter a century respectively, the Tibetan and their inferior brethren, the Eezham Tamils in India, languish without any international status of refugees and no international remedy to their plights.

The demonstration is of a particular significance since India is never exposed to international screening of its dubious handling of the refugees issue, at a time when such issues have become transnational in questioning the global order machinated by the establishments of criminal record, the activists further said.