The extent of military presence in the North of Sri Lanka has understandably been the focus of much attention. This week’s edition of the Economic and Political Weekly carries an interesting commentary on the topic, which suggests that there is 1 military personnel for approximately every 5 civilians in the Northern Province. If true, this is really extraordinary, especially because, as the commentary points out, this ratio—even if halved to make it 1 security personnel for every 10 civilians—would still render it higher than during the siege in Iraq, Northern Ireland at the height of the conflict, Kashmir and even the French occupation of Algeria. 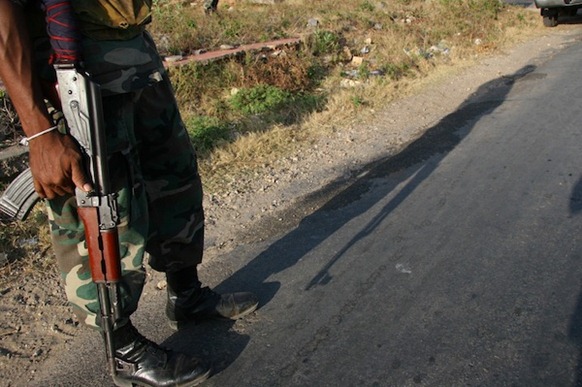 The focus of this piece however is Jaffna. Not long ago, the Defence Secretary, Government of Sri Lanka, claimed that there had been a substantial reduction in military presence in Jaffna, with just 15,600 personnel remaining there now.[1] He appeared to be echoing a Sri Lankan military spokesperson, who some days earlier, was reported as saying that the “number of troops in the Jaffna Peninsula, at present has been further reduced to around 15,000, a reduction of over 60%…” with only the 51st, 52nd and 55th Divisions of the Army still stationed in Jaffna.[2] Indeed, on May 25th, The Island quoted the Jaffna Security Forces Commander as saying much the same thing.[3]

This is significant, given increasing concern over the heavy military presence in the North, and arguably to be welcomed, if it is true. It is also noteworthy because it appears somewhat contrary to the President’s recent categorical statement that there will be no reductions in bases or troops in the North.[4] However, this claim and accompanying explanations do beg the question.

For a start, the website of the Civil Military Coordination (CIMIC) of the Security Forces Head Quarters, Jaffna, still tells us that “Over 35,000 troops are under its command and is drawn from troop levels that constitute the 51st, 52nd, 55th Divisions and several other Task Force personnel attached to this station.”[5] (emphasis added) See screen shot (of 9 July) below. 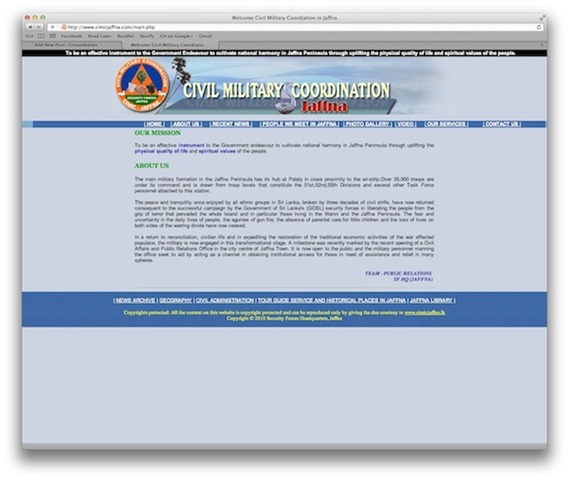 Of course this could simply be a mistake, a gap in communication, so one still needs to consider other issues. For a start, many have argued that the number of 15,600 simply does not correspond with visual evidence that suggests a far higher density, given the ubiquitous nature of the military presence in Jaffna. And there is something to be said for this. For instance, just last week, on the approximately 50-kilometre stretch of the A9 alone between Jaffna and Elephant Pass one counted 19 Army posts (including check-points, guard-posts and bunkers manned by one or two soldiers) and 23 other camps, small and large. Similarly, at least 7 camps could be counted on the road from Jaffna to Point Pedro, in addition to smaller guard-posts and bunkers that one did not count. This, it has to be stressed, was only what was visible from the main road but there are plenty of posts and camps that dot the interiors of the peninsula and the islands.

But there is more to it than visual evidence alone. A careful scrutiny of the website of the Sri Lankan Army (SLA) reveals that while the 51st and 52nd Divisions each have four brigades, the 55th has at least three—all of which are stationed across Jaffna. It is hard to believe that the three Jaffna Divisions, all of which saw active combat until mid-2009 are so small, especially if one accepts the Defence Secretary’s claim to the Indian Defence Review that size of the Sri Lankan Army is 300,000[6] and that the Army had 20 Divisions,[7] the last being a claim he made at the government organised Defence Seminar last year.

A more likely explanation is that battalions of independent regiments are not being counted within the strength of the Divisions (which, strictly speaking, are more active operational formations) even though regimental battalions may well be aligned with Brigades of particular Divisions in an order of battle, for example. The Sri Lankan Army, like many others, has several such infantry, artillery and service regiments. For example, the Vijayabahu Infantry Regiment alone reportedly has 655 officers and 16,501 other ranks across its many regular and volunteer battalions.[8] Then there are other regiments: Gemunu Watch, Gajaba, Sri Lanka Sinha Rifles, Sri Lanka Light Infantry, the Artillery, Field Engineers etc. In other words, it is more likely that the number of 15,600 does not include the number of troops serving in the battalions of these regiments that are stationed in Jaffna.

It is impossible, from the outside at least, to say exactly what the extent of the presence is in Jaffna of these regimental units. Thankfully, however, we do have a very good clue. A news item on CIMIC website (dated 6 June 2012) lists the presence of several (7 to be precise) battalions of various regiments within the operational area of just one Jaffna-based Division (the 52nd) who organised various events around the recent Poson festival.[9] These include, the 7th and 16th battalions of Vijayabahu; the 10th and 18th battalions of Gemunu Watch; and the 15th, 19th and 10th battalions of the Gajaba, Sinha and Sri Lanka National Guard regiments respectively. No doubt there are several battalions from other regiments posted in the areas of other Divisions as well.

One must also read carefully the language; ‘troops’ are not the same as ‘Army’, for there is a significant military presence other than that of the Army in the peninsula and the islands. Jaffna also hosts the Northern Naval Command, one of the key commands of the Sri Lankan Navy. A careful scan of the website of the Sri Lankan navy coupled with field observation suggests that in addition to the larger bases in the form of SLNS Elara and SLNS Uttara, there are several other naval units and land-based contingents across Jaffna peninsula and the islands, which appear to include SLNS: Agbo, Gotaimbara, Kanchadeva, Vasaba, and Welusumana.  In addition, there is also a substantial presence of the Air Force in Jaffna, with the Palaly Air Force base being a key strategic asset. And in addition there are other forces, like the Special Task Force (now directly under the Ministry of Defence) as well.

At risk of repetition, it simply does not appear credible that the total of three full Army Divisions (from an Army 300,000 strong with 20 divisions), other battalions from different regiments, seven Naval contingents, one large Air-Force base and the Special Task Force, is a mere 15,600.

Interestingly, the Defence Secretary is reported as claiming, in the story cited at the beginning of this piece, that “[d]ue to redeployment, Hambantota will have a division”. The truth is that one Division (the 12th) has now been at Hambantota for nearly over a year already, with its headquarters at Nagarawewa.[10] It does appear rather contrived to suggest, at this point in time, that this is a ‘current redeployment’ of troops from Jaffna.

Then there is the claim that Anuradhapura has the more troops. What the Defence Secretary fails to mention of course is that there is a huge difference between the nature of the military presence in Jaffna and Anuradhapura. In the North, Jaffna included, the military and especially the Army is for all intents and purposes the government as the civilian administration remains enfeebled; the Province itself is run by a Governor, who until just prior to his appointment was the head of the Security Forces Headquarters, Jaffna. Needless to say, the presence of the military Anuradhapura has a history; it was for long almost a frontline in the war with the LTTE. Mere presence does not necessarily translate (though size does matter) into militarisation. Unlike in Anuradhapura, the security forces in Jaffna are not merely present; they are, literally, the primary instruments of governance. Moreover, one only has to compare what one sees of the military on the road from Anuradhapura to Puttalam (76 kms), for example, with the road from Elephant Pass to Jaffna to understand what militarisation means.

Given that the war has now been over three years, there is no apparent strategic reason to withhold information as to how many military personnel there really are on the ground though of course it may be politically expeditious to be less than honest about it. And that, it appears, is what the Government is doing both in domestic and international forums, including most recently, in Geneva. A story in the Daily News with the banner “Military presence in North rationalized”[11] noted that Sri Lanka told the UN Human Rights Council that the “current military strength in the North [is] reduced to 20,000.” Of course, the fourth paragraph makes it clear that the number pertains only to Jaffna. However, this does not even correspond with the 15,6000 claimed by the Defence Secretary or the 35,000 claimed by the CIMIC Jaffna website. While any reduction in the number of troops in Jaffna or elsewhere in the Northern Province is to be welcomed, for it to be credible it has to be accompanied by a level of information and disclosure that inspires confidence.