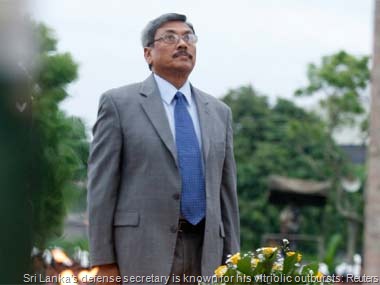 Sri Lankan defence secretary Gotabhaya Rajapakse has always been a violently vitriolic man. In this interview with BBC’s Hard Talk, he threatened to execute the former Sri Lankan army chief for treason saying, “He can’t do that. He was the commander. That’s a treason. We will hang him if he do that. I’m telling you… How can he betray the country? He is a liar, liar, liar.”

But his outbursts, which startled the BBC reporter, are nothing new to Sri Lanka’s long suffering reporters. At home he is even more unguarded, violent and unchecked in his responses and interactions with the already much stifled and censored media.

On one occasion, near the end of the war, he told he two journalists working for the state-owned Lake House Publications that unless they stopped criticizing the army, “what will happen to you is beyond my control”.

When asked by the two journalists if he was threatening them, he replied “I am definitely not threatening your lives. Our services are appreciated by 99 per cent of the people. They love the Army Commander and the Army. There are Sri Lankan patriots who love us do and will do what is required if necessary.”

In April 2007 he was accused of calling the Editor of the Sri Lankan newspaper Daily Mirror, Champika Liyanaarachchi, and threatening her, saying that she would escape reprisals only if she resigned.

He was also accused for threatening to “exterminate” a journalist from the same newspaper for writing articles about the plight of civilian war casualties.

Rajapakse has denied all these reports, but he will be hard pressed to defend his latest outburst at prominent Sri Lankan journalist Fredrica Jansz, the current editor of the Sunday Leader, whose founding editor Lasantha Wickramatunga was gunned down by thugs in broad daylight.

Jansz had called the Defence secretary on two occasions to get his response to a report that an aircraft belonging to the national carrier Sri Lankan airlines, was to be changed to accommodate a personal friend and pilot who had offered to ensure the safe passage of a puppy dog for him from Zurich.

Jansz has published the transcript of the phone calls, in which Rajapakse tells her that he will sue her “f**king publication”, declares that he is “not afraid of the bloody courts” calls  her and all journalists, “filthy pigs who eat shit” and even tells her that she will be killed. (Read the entire transcript here)

Jansz’s decision to publish the transcript is an extraordinarily brave move, though some would undoubtedly question the wisdom of the decision.

Wielding all the power of the much feared Rajapakse might, Gotabhaya’s threats are not to be taken lightly.

And the alarming reality is that as a government representative he feels empowered enough to threaten such action. Even in this instance, the article has been making the rounds in English language media and on the Internet, but has been completely ignored by the  local Sinhala media. The story has not been reported in even one local language newspaper, and that in itself is a triumph for the Defence secretary as it means that a majority of his votebank has no idea of what he said.

This is reflective of an utterly demoralizing role of self censorship that has been adopted by the vernacular media in the country. Perhaps afraid of reprisals, or maybe because they tacitly support the government and do not think it is important, they simply choose to ignore. Prominent rights group Human Rights Watch in fact recently released this report, in which it talks about systemic government harassment of critical journalists and media outlets in Sri Lanka.

Whatever be the reason, it is this kind of reporting – or the lack of it – that is responsible for this kind of behavior to go unchecked,  and also caused massive public apathy to the plight of many of the war victims in north Sri Lanka.