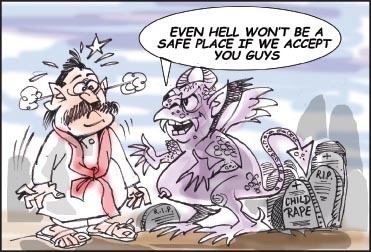 Over 700 children were raped/abused in the first six months of 2012 – a horrendous rate of four a day. Murders (including custodial murders) are so common they barely make the news. In post-war Sri Lanka, violence is becoming the method-of-choice to resolve a conflict, fulfil a desire, deal with an opponent, enrich oneself or just vent out.

The extent to which the virus of violence has infused the national-bloodstream can be gleaned from two recent outbursts of intra-Buddhist conflict. On both occasions mob-violence was used to ‘resolve’ a ‘religious’ dispute, with ‘true Buddhists’ assaulting ‘false Buddhists’. The rights and the wrongs of either case is immaterial; what is revealing is that self-proclaimed adherents of Buddhism, a teaching premised on absolute non-violence, had no compunction whatsoever in using violence to settle a doctrinal disagreement.

These violent outbursts were regarded with near-indifference by religious and political leaders (including the JHU, which believes, against all evidence, that monks can bring morality and civility into politics); and by society.

Those are signs of the times; as is the torrent of verbal-violence unleashed by Gotabaya Rajapaksa on Frederica Jansz.

When the ‘Queen of Hearts’ in Alice’s Wonderland shrieks, “Collar that Dormouse! Behead that Dormouse!.. Suppress him! Pinch Him!”, that is funny because she is just a character in a book. But when Gotabaya Rajapaksa shrieks, “Your type of journalists are Pigs who eat Shit… You shit journalist trying to split this country”, that is far from funny because he is very, very real. Such outbursts, if they come from adequately restrained inebriates/bedlamites, can be dismissed as harmless ravings. But when they emanate from men who wield immense power – and do so with the finesse of a crowbar – it is terrifying, since their verbal violence can be translated so very easily into the physical variety.

Mr. Rajapaksa’s language is emblematic of his family’s rule which guarantees impunity for friends, is violently intolerant of opponents and indifferent towards everyone else. Thus the Rajapaksa kith and kin are protected even when they are implicated in murder (the CID and the AG’s Department are yet to move a muscle to investigate, question or apprehend Duminda Silva) and opponents are hounded for little or no reason. The rest of the populace is treated with benign or malign neglect, evident in the blasé manner in which the Siblings impose economic hardships on the overburdened masses, even as they and their acolytes revel in cocoons of luxury.

So the regime, compelled to address the epidemic of child rape, callously blamed the parents for failing to protect children. Unfortunately, in a society addicted and inured to violence even the most careful parent may not be able to protect his/her child. Last week a 15 year old girl on her way to school was “dragged…off the cycle she was peddling and raped” by a soldier attached to the Welikanda camp (Ceylon Today – 9.7.2012). Perhaps Minister S. B. Dissanayake who hailed the closure of village schools as a sign of development can also argue that village schools must be closed because they endanger the safety of village children?

History teaches, time and again, that for abominations to breakout, for outrages to become common-or-garden, the participation of the majority is unnecessary. All the majority has to do is to slink into indifference and drowse in apathy, while an active minority turns the land into a moral desert.

In post-war Sri Lanka, Tamils, political opponents, media personnel and children are all Untermenschen because the Rajapaksa ethos despises weakness almost as much as it abhors dissent

Countries which had been immersed in long conflicts are particularly prone to societal violence. Post-war, Lankan rulers should have made a conscious, consistent effort to de-militarize the country and to inculcate a value-system based on non-violence, tolerance, equality and compassion in society. Instead, militarization is being intensified and a military ethos which celebrates strength and glorifies violence inculcated.

In military ethos, ‘good’ has a meaning antithetically different from civilian ethos. A ‘good’ soldier must be ready to kill and die, whenever ordered to do so. Discipline is his god and unquestioning obedience the required mode of worship.

In a militarised value system physical strength is glorified and weakness despised. Militaries are hierarchical systems; their members must extend servile obedience to superiors and are entitled to lord it over subordinates in return. A militarised value system is thus profoundly anti-democratic. Militaries are holdouts of the pre-Enlightenment ethos which regarded inequality not as an (often unavoidable) evil but as a necessary virtue.

Citizens can practice mindless obedience only at their own peril; military men who doubt, think, question and debate are likely to end up before a tribunal for insubordination.  What happens when a society is exposed to this military culture and injected with concomitant military values? Such a ‘total counter-revolution of the mind’ is precisely what the Rajapaksas are undertaking in Sri Lanka.

Post-War, the Ruling Siblings have laboured to transform the Lankan armed forces into a Rajapaksa Praetorian Guard and to infuse this changed military into every societal nook and cranny. Their dynastic project has a suitable ideology in Sinhala Supremacism but lacks an adequate vehicle; since the SLFP (with its Bandaranaike antecedents) is structurally unreliable, the only available alternative is the military.

That was why the Siblings moved with ruthless determination to crush Gen. Sarath Fonseka, the sole obstacle to their strategy of using the military to bolster and defend dynastic rule.

Militarizing the country with a military which is unquestioningly loyal to the Ruling Family can serve multiple purposes. As economic factors erode the Rajapaksa support base in the South, the military can be the Familial regime’s supporter of last resort, helping it to win elections and suppress democratic dissent. The military would also be indispensable in case the Ruling Family is compelled to resort to the Togolese mode of succession. When the long-term ruler of that West African nation died abroad, the army, in violation of the Constitution, bestowed the presidency on his son, Faure Eyadema. Constitutionally the Speaker should have succeeded the President, but the military reportedly prevented his plane from landing. Militarizing Sri Lanka with a Rajapaksaised military is a sine-qua-non for the Togo-path, in case fate renders it necessary.

Last week, teachers unions objected to a “military training programme organised for the AL students of the Mahinda Rajapaksa College, Homagama at the Rantambe Military Camp” (Ceylon Today – 11.7.2012) and to a plan to bestow military ranks on school principals.

By instilling military values such as unquestioning obedience, inequality and mindless discipline in the young, the regime can ensure that a sizeable segment of the next generation becomes pliant subjects rather than thinking citizens.

What better way to ensure dynastic succession than to turn Sri Lanka into a vast garrison peopled with an army of soldiers and civilians, unused alike to critical thinking and compassion, permanently ‘waiting for a sign’ to hail, decry…or kill?