Gajendrakumar Ponnambalam, the leader of Tamil National Peoples’ Front (TNPF), addressing the peaceful protest on Wednesday at Nelliyadi, which was organised against the slaying of Nimalarooban in Sri Lanka’s prison, urged the people to see things in the context of Sri Lankan government’s systematic annihilation of the existence of Tamils as a Nation in the island. “Until we fail to establish the recognition of the Tamil nationhood and its distinct sovereignty, we will be failing in our political work,” he said. In the meantime, TNA MP S. Sritharan, addressing the protesters at Nelliyadi said Tamils are not a defeated Nation. “What has happened to our youth in 2012 in Vavuniyaa is nothing different than what had happened to our youth at Welikade prison in 1983,” he said adding that until the injustice continues, the struggle for liberation would continue.

Mr Gajendrakumar, alluded that it was the time-bound duty of the Tamil people to course-correct their politicians towards the right path in addressing the fundamentals of the Tamil cause instead of deviations focusing on isolated issues and side-effects without a coherent strategy.

Gajendrakumar Ponnambalam at Nelliyadi by TamilNet

Following are the remarks of Gajendrakumar Ponnambalam: 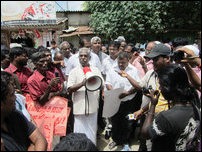 Today, we protest against the slaying of Nimalarooban in the prison.

We protest against the killings of the political prisoners and the Prisoners of War.

Our lands are being appropriated.

The economy of the Tamil nation is being destroyed.

All our fundamental rights are being suppressed. 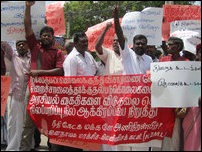 We can continue our protests till our demise, identifying and isolating every single violation, everyday [without focusing on the underlying core issue.]

In reality, the [Sri Lankan] government also wishes that we spend our lives protesting at the side-effects. As far as the government is concerned, what they fundamentally attempt is to end Tamils existence as a Nation.

At every juncture, they attempt at suppressing all our basic components of the nationhood. We need to have a clear perspective on this [larger issue].

We need to act in a manner to put an effective full stop to the move of destroying the very existence of the Tamil nation.

Until we fail to establish the recognition of the Tamil nationhood and its distinct sovereignty, we will be failing in our political work. This is the reality.

We can stage a protest here today, at another location tomorrow, and we can continue staging protests to the end as we get destroyed.

You should understand that, until we realise this in the right context, we will not be succeeding.

We are not enemies of the Sinhala Nation. On the contrary, we seek to live in parity and equality with the Sinahal Nation.

The Tamils didn’t start with the demand for separation. It was when the Sinhala Nation was engaged in a planned annihilation of the Tamil Nation, we were pushed to voice for our rights.

Even today, while on one hand you have bans and denial of democratic rights, on the other hand the Tamil nation is being subjugated.

Even at this juncture, when we have said that we are prepared to live together in dignity, given that Tamils are recognised as a Nation in parity with the Sinhala Nation, our democratic rights are being suppressed in a systematic and planned way.

Dear friends, this is not a struggle being waged by a political party. Until it remains a struggle of political parties the Sinhala Nation will be succeeding in its racist approach. This struggle is about the rights of our people, not about our individual disputes. So, the people should raise their voices very clearly [with the right perspective].