Around 300 protesters gathered at Nelliyadi in Vadamaraadchi, Jaffna, on Wednesday, braving threats from the occupying Sri Lanka Army that warned participants about ‘firing orders’ issued to SL soldiers and Policemen. However, the demonstrators, that included solidarity groups from Upcountry and South, protesting the killing of Tamil prisoner Nimalarooban, successfully beat the sabotage attempt by the SL Military Intelligence. The SL military had dispatched four masked operatives in two motorbikes with Tamil Eelam national flags in their attempt to incite trouble at the site of the protest organised by the Tamil National Peoples Front (TNPF). The intelligence operatives had to escape from being caught by the protesters. 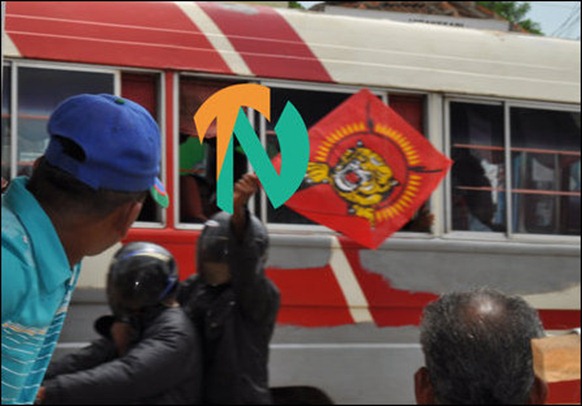 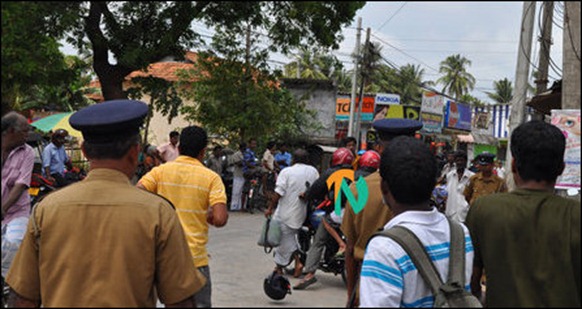 The SL military intelligence operatives, escaping from the protest site, crashing on an aged man. The Sri Lankan Police is watching by without doing anything to arrest the intruders.

In their rush to escape from being caught by the protesters, the Sri Lankan military intelligence operatives who waved Tiger flag at the protest ran their bike on a civilian.

The trouble-making Sri Lankan intelligence operatives escaped from the site while the Sri Lankan policemen were silently watching the intruders passing through the SL military check posts in open daylight.

The TNPF organisers urged the participants to show restraint and observe the protest peacefully as the intention of the intruders was clearly understood by the participants from all parts of the island.

The latest episode has evidently exposed the intention by the SL military intelligence and the extent to which they are prepared to go in discrediting peaceful protests, the demonstrators said. 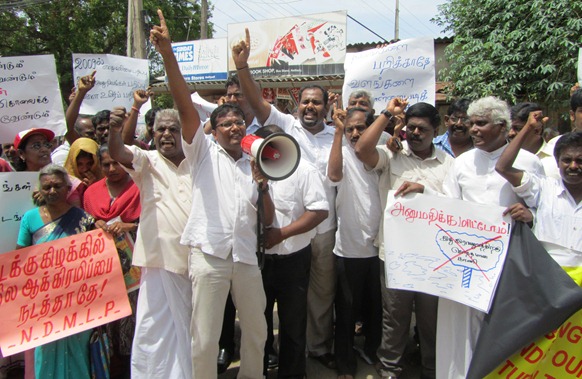 Protest at Nelliyadi, organised by TNPF, was particiapted by TNA parliamentarian S. Sritharan and Tamil political activists. Activists of New-Democratic Marxist-Leninist Party (NDMLP) together with the representatives of the political parties from South, the United Socialist Party (USP), Nava Sama Samaja Party (NSSP) and Democratic Peoples Front (DPF) participated in the protest. Trade union representatives and grassroots activists from different parts of the island also took part in the event.

The SL military intelligence, which has been adopting various tactics, from ‘grease devils’ to ‘crude oil attacks’, to strengthen their military grip on the country of Eezham Tamils, have been working hard to sabotage the peaceful protests in recent days.

On Tuesday, just a day before the protest, the SL military intelligence had deployed its squads to attack the houses of TNPF politicians who organised the protest. The attackers had used crude oil and stones.

On Wednesday, the SLA and SL policemen were also attempting block participants from outside from attending the protest by screening the travellers on the two entry points to Vadamaraadchi conveying them a message that the SL military and police were given ‘firing order’ to quell the protest at Nelliyadi.

Rev. Fr. Marimuthupillai Sivasakthivel in his address to the protesters exposed how he and his team were blocked at their entry to Vadamaraadchi and how they were ‘advised’ by the SL military that told them that they had received ‘firing order’.

The Catholic priest, in his address, also exposed the sabotage attempt by the intruding operatives in motorbikes. 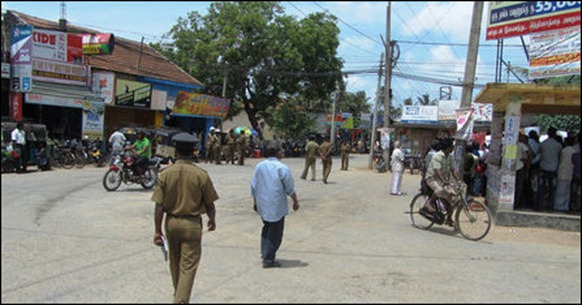 The SL military operatives, who carried Tiger flag to incite trouble at the protest site, were not blocked by hundreds of Sri Lankan policemen deployed at Nelliyadi junction.