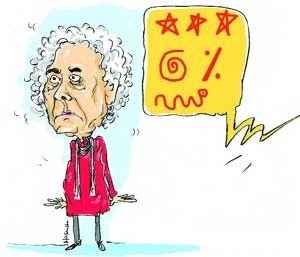 Defence secretary said in an interview “No, in fact I clarified that in the conversation with her over the phone – the very same conversation. All I said was that people are so angry with persons like her who have worked against the war effort and the country, that if she attends a function, 90% of the people would be against her, and that I would be able to point this out to her at such a function. I said such people who are angry  may want to kill her – I never said that I was going to kill her; there was no threat by  me except the lawful threat to sue.” Ok. Here is a sensible man telling a journalist, the real situation in the society as he understands. In fact many of my friends and relations used to tell me that I should be careful in defending the right of self determination of Tamils, as many Sinhala racists are wild and may kill me if they get an opportunity. Of course this was true and I was shot down and with a near fatal injury, I struggled for several weeks to survive. Obviously warning a person, with or without love and affection, of dangers that the person could face is praise worthy if it was done in a personal conversation not within an argument. In an argument especially when the person involved is a champion against the liberation of the Tamil nation it will be some thing different. In fact in the period 88/ 89 if any JVP leader warned me about dangers to my life, I would have certainly assumed that, as a threat. I am sure at that stage, if I had warned a JVP leader about the dangers he is facing, he would have assumed that it is a part of a threat.

Against the war effort

Gotabhaya says that people are so angry with persons like her who have worked against the war effort and the country. He does not understand that he is giving a political perspective. Not a factual statement. I can say the reverse. People are so angry with persons like Gotabhaya who used the war cry  and war efforts to decimate the Tamils and brought oppression and misery to Sinhala masses. In fact people are beginning to understand the reality of Gotabhaya type thinking. They were promised heaven and prosperity. But now they are asked to suffer with hunger and misery. At the same time Mahinda promises to the global masters to implement an acceptable devolution for the Tamil homeland. At least that is what the masters of the regime, India, America and others are demanding; and they mean business. Masses, even the least educated can understand this is ‘Maha dena muththa’ thinking. First you cut the neck of the goat and then you smash the pot. Now what the regime has done is first to kill and decimate the Tamil nationality and then take steps to grant autonomy  to the Tamil homeland! Those who advocated, in the previous period, autonomy and peace efforts as a way out were classified as betrayers and traitors to Lanka. The fact is if a consistent peace effort was made then, we could have solved the problem without all this bloodshed and the enslavement to foreign powers. What really happened was to follow the idiotic path of Mahinda Chinthanaya at the expense of an intelligent way out. Bottom line of all this is the inability to see the needs of the other who is living with you sharing the same land and same resources.

I cannot speak for Paikiasothy or Frederica. But I know that I thought the war against liberation out fit is a disaster. That is what Marx and Lenin has taught me and I was convinced to risk my life to explain that. Gotabhaya or any other has the right to think that I am wrong and that my thinking is dangerous. But have they got the right to launch campaigns in public in government owned media organizations to discredit me as a traitor to be killed by stoning, say that they have the evidence that I stood for self determination of Tamils because I was paid by somebody, say that I am a bastard and an illegitimate child born to my dead mother Vimala Kotalawela?. All that is good journalism and patriotic spiritual conduct!  All I can say is that these people do not have the elementary sense of justice.

It is the sense of equality  that creates the entire democratic legal system, Jefferson who said that; at least the bourgeoisie as a revolutionary  class that inaugurated the modern world, fiercely stood for equality  among its youth. Unfortunately that cannot be recreated in this backward society. In place of Jefferson we have Gotabhaya who had easily fallen in to a mess. He might say it is a conspiracy to discredit him. But the fact is he is exposed to be a man without a measure of things he is handling. He can confess “I did not do so. I used words such as ‘bloody’ or whatever, not to refer to her but to refer to the incident. I never used foul language on her – but I used certain words in the context that she provoked me unreasonably, in referring to the incident, as I have pointed out above. I mean these are words that are used very  commonly in America (USA) for instance, in normal usage. In fact a very high ranking officer of the American government (name withheld by this writer) met me and said about the TV programme Hard Talk and the person who does Hard Talk on BBC: ‘You know we are in the same boat… being questioned by that a..shole.’ This person was referring to Stephen Sackur who does the BBC programme Hard Talk. So this is very  common usage, in USA for instance, and they use these words in normal talk – but these people are trying to make a big issue out of it to get at me, because they hate me about the war. In any case I used certain words with reference to the incident; I did not use foul language to abuse her.” He can cry and say what he did was no worse than his masters in the west. But I do not believe that he could rescue what is lost. (Dr Vickramabahu Karunaratne)