While the global powers of all persuasions—the USA, Russia, China and India—each driven by their own realpolitik concerns and self- interests continue to dismiss Tamil liberation cause and struggle, a new book written by a Diaspora Tamil engaged in human rights work in the Tamil-controlled area of Vanni until the Sri Lanka’s "Crime of the Century" at Mu’l’livaaykkaal, provides a compelling insider’s look at the motivations, issues and complexities of this internationally abetted genocide; the entire text is based on first hand observation and includes sociological insights based on these first hand observations, says the publisher, Clarity Press in the US. 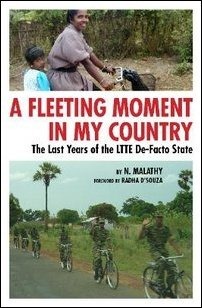 The author, N. Malathy, is member of the Eezham Tamil Diaspora and a naturalised New Zealand citizen who has lived in New Zealand for four decades. She graduated from Peradeniya in Electrical Engineering and holds a Ph.D. in computer science from the University of Canterbury in New Zealand.

She spent four years in the country of Eezham Tamils, in Vanni under the control of the Liberation Tigers of Tamil Eelam (LTTE), from 2005 till 2009. During this period she worked in a human rights body, a women’s organization, and an orphanage. Her experiences spanned working with civilian institutions in the de facto state of the Eezham Tamils, preparing documentation for peace talks, documenting systematic human rights violations by the Sri Lankan military and working on a project to raise awareness of domestic violence.

It must be said here, however, that among the activities that all LTTE members, both men and women, enjoyed most was reminiscing about events of the past. Watching them enjoying such conversations, one would think that they were the happiest people on earth because the interactions would be filled with laughter. They would discuss dead comrades, past battles, instances of near capture by the Lankan Military, receiving punishment from superiors, etc. But all of these subjects were discussed with a sense of humor. One SLMM member, who had noticed this without being able to understand the language, once commented that for a set of liberation fighters they did spend an awful lot of time talking and laughing. All of them indeed carried with them a great deal of painful memories and this, it seemed, was their therapy.

One of the outstanding features of Vanni society was the degree of integration of disabled people into the mainstream. They could be seen actively participating in many spheres, carrying out work with grit and amazing agility. People with one arm would ride motorbikes with heavy loads behind them on their motorbikes. You would hardly have known that some people you worked with were missing a leg from below the knee. Disability had been normalized. Serving these people was the only prosthetic-fitting service in Vanni, Venpuraa. This also expanded its service with the introduction of new technology. A common phrase one heard even prior to the Mullivaikaal genocide was about so and so having a piece of shrapnel in some part of their body. Many people lived with such pieces in their body and suffered varying degrees of pain as a result. Visiting medical experts did their best to remove the ones causing the most severe pain.

Though I did not have the statistics, just observing the number of women on the streets during peak hours dressed for work, it was obvious that a greater percentage of women in Vanni went to work outside the home. There were also more women in civilian clothes riding motorbikes on Vanni roads compared to the rest of the island. Women, both LTTE members as well as civilians, occupied the public space in large numbers. They were very visible on the roads and in the LTTE institutions. This gave Vanni a uniquely pro-woman character, which was absent elsewhere on the island. …

It was a unique kind of feminism, created by connecting the majority of women living all over Vanni, from all walks of life, for public action regarding women and children in need of help.

A Fleeting Moment in My Country – N. Malathy