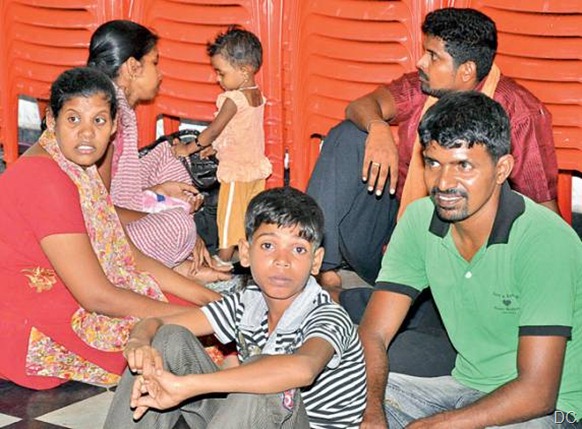 In a significant development, the Kerala police are preparing to deport to Colombo 12 Sri Lankan Tamils recently held at Kollam while trying to illegally sail to Australia for asylum. The remaining members of the 151-strong group, which included 19 women and 22 children, have been already sent back to their refugee camps in Tamil Nadu.

“We are shifting these 12 Tamils from the Thiruvananthapuram central jail, where they have been held since arrest on June 3 night, to Gandhi Bhavan in Pathanapuram near Kottarakara tomorrow (Saturday). We will keep them there awaiting clearance from the Ministry of External Affairs and also the Sri Lankan high commission before deporting them to Colombo”, said circle inspector Y. Kamarudeen.

Asked why these 12 were being deported to Sri Lanka, a source explained that they had arrived by air from Sri Lanka on June 2 and joined the larger group that had gathered at Kollam from various refugee camps in TN.

“Since they came from Colombo, we are sending them back there. Their crime trying to use our land for the illegal boat trip to Australia falls under the Foreigners’ Act. The others have been sent back to their refugee camps in Tamil Nadu”, the source said.

This may be the first time in several years that Sri Lankan Tamils landed in India are being deported to Sri Lanka.

Despite the police thwarting several attempts by unscrupulous agents trying to send desperate Lankan Tamils — mostly refugees in TN camps — to Australia and many media reports warning them of hundreds of such people dying at sea, the trafficking of these Tamils has not slowed down.

The latest episode occurred close to the zoo at suburban Vandalur with the ‘Q’ branch police (who deal with extremist elements) intercepting three vans carrying 61 people – except one local Tamil hailing from Erode — from various refugee camps across TN. This group included seven women and 14 children, the youngest being a girl less than year-old.