Tamil Nadu Chief Minister Ms Jayalalithaa on Sunday gave orders to send back a football team of Sri Lanka’s Royal College in Colombo that had come to play ‘friendly’ matches in Chennai. The matches had been organised through an arrangement between the College and an official of the Reserve Bank of India, and the team had already played a match on Friday with the Customs Department of the Central Government, at the Nehru Stadium in Chennai. Slamming the Government of India for allowing the Sri Lankan team to play matches in Tamil Nadu, the Chief Minister directed the Chief Secretary of the State to suspend an officer in-charge of the Nehru Stadium of the state government who had given oral permission for the venue. Department level inquiries are initiated against the official. 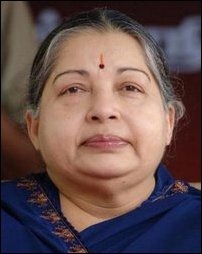 The [Nehru] Stadium officer has no authority to allow matches there and only the Sports Development Authority of Tamil Nadu is authorised to do so. By using an authority that did not exist, the official had demeaned the sentiments of Tamil people," the Chief Minister was saying in a statement.

The Tamil Nadu government has also directed the sending back of another batch of 8 Sri Lankan students and their coach from Hilburn International College in Ratnapura in the south of Sri Lanka who had come for a tournament with Vealammaa’l High School in Chennai.

The Government of India permitting such sports events, at a time when the Tamils in the island languish in camps and when New Delhi acts contrary to the resolutions of Tamil Nadu State Assembly, is humiliating the people of Tamil Nadu, the chief minister said.

Permitting stay of foreigners is a matter vested with the authority of states in India.

One year after the Vanni War, India invited Sri Lankan President Mahinda Rajapaksa as Guest of Honour to the Commonwealth Games that took place in New Delhi.

In strongly worded letters, Ms. Jayalalithaa has recently asked the Centre to stop training Sri Lankan military personnel in India and send them back.

The Tamil Nadu government in its actions against the genocidal state of Sri Lanka is fully backed by the sentiments of the people of Tamil Nadu, political observers in Chennai commented.

Unlike the gagged conditions for Eezham Tamils in the island that suppress the rise of transparent people’s leadership, and unlike the scenario in the diaspora where efforts are directed to dealing with the establishments than leading the masses, the people of Tamil Nadu have popular political institutions and leadership that cannot go against a vigilant grassroot. Therefore, Tamil Nadu has better means and a special responsibility in shaping the democratic struggle against the erring powers on the question of Eezham Tamils, the Chennai observers said.

By adamantly following a foreign policy against righteous wishes of the masses of a state, the Congress regime in New Delhi is increasingly inviting a constitutional and national crisis inside India, the observers further said, adding that if the aim of New Delhi is integration of the whole island, its approach to the national question in the island is totally counter productive to the aim.