Following Friday’s demonstration at Mullaiththeevu for resettlement of the people of Keappaa-pulavu back in their own village, the SL military on Saturday embarked upon threatening the villagers now in the IDP camp at Cheddiku’lam to immediately vacate it, move temporarily to a school building at Vattaappazhai and accept the SL government offer of another place for resettlement. When the people insisted that they want their village and cultivation lands back, the Sinhala military commander started shouting in his language that either willing or not, all people would be removed from the camp before Monday. Speaking to TamilNet on Saturday, the TNPF leader Gajendrakumar Ponnambalam blamed the International Community for the current plight of Eezham Tamils.

“Like in the case of Champoor and the case of Valikaamam, if the people from Keappaapulavu leave the Cheddikku’lam camp, without any assurances that they would be returned permanently to their own homes within a specified timeline, they would never be able to return to their homes and their so-called temporary residences would in fact become their permanent residences,” he said adding that “as a result, they would lose their livelihood and everything they possessed.”

This is a strategy to make Tamils orphans in their own land. If the International Community continues to handle the resettlement in such a way, the very existence of Tamils as a distinct nation in the island will be a story of the past, he warned.

Unless the International Community come forward in a meaningful way to ensure the rights and welfare of the oppressed nation of Tamils in the island the annihilation of the nation cannot be prevented, Gajendrakumar further said.

According to TNPF circles, the SL government is in a hurry to shut down the Cheddiku’lam camp, even by dumping the people at temporary shelters at other places, just to show an account to the world that all people have been resettled.

“This is a farce as we all know that everyone is entitled to go to their homes,” Gajendrakumar Ponnambalam told TamilNet, reacting to the news from Cheddikku’lam camp.

They have been intimidated and are today either living in areas which are not their own, or are forcibly sent to new areas, but the world is informed that the people have willingly accepted the alternate lands, and the government is ‘people-friendly,’ Gajendrakumar said.

On Saturday, the commander of the occupying Sinhala military for Keappaa-pulavu region, Samarasinghe, took the SL Government Agent of Mullaiththeevu and other district officials along with him and went to the Cheddiku’lam camp.

At the camp, the representatives of the Keappaa-pulavu village were told that they would be vacated from the camp and would be taken to Vattaap-pazhai Mahaaviththiyaalayam School for temporary stay, until alternative land is identified for their ‘resettlement’.

The people were also told that all facilities would be provided to them in order to facilitate their new settlement in alternate lands.

However, the representatives of the Keappaapulavu people insisted that their only request and condition to leave the Cheddiku’lam camp is that they should be allowed to resettle in their own homes and in their lands that belonged to them, and that they are not interested in temporary or alternate ‘facilities’.

The civilian representatives further told the SL military commander and the SLGA that the lands that belonged to them were fertile lands where they had all the resources necessary for livelihood and a life of contentment.

As the people reiterated their stand, the SL military commander and the officials changed their tone and started to force the people to accept the Sri Lankan ‘offer’. 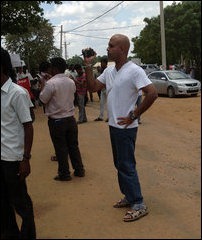 At this stage, the SL military intelligence operatives accompanied the team started with their usual intimidation technique of photographing and videographing the people and their responses.

The representatives of the villagers were ‘reminded’ that there were ‘government employees’ among them and that they were getting salaries from the SL government. “We will take care of them,” the SL officials told them in an abusive way.

Despite the threatening and very confrontational behaviour of the officials including the SL military and intelligence officials at the meeting, the Keappaapulavu representatives were firm in their position.

As a compromise, the villagers suggested that a written undertaking from responsible high officials of the SL government ensuring that they will definitely be resettled in their own homes within a specified period. In that case, leaving Cheddiku’lam camp to school at Vattaappazhai could be considered, they said.

But, the military and officials were not prepared to give any such assurance.

The meeting concluded with the SL military official, who was speaking in Sinhala, losing his temper and shouting in a hostile and aggressive way that under no circumstances the villagers would be allowed to remain in Cheddiku’lam camp after Monday. 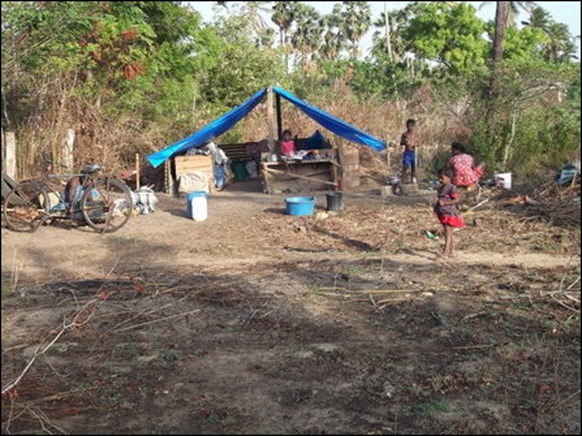 An example of so-called resettlement in alternative land for the people who once had a contended life with houses and cultivation lands in their own villages. Photographed at Aananthapuram, a neighbouring place to Keappaapulavu in the Puthukkuidiyiruppu division of Mullaiththeevu district.

The occupying Sinhala military plans a large cantonment at Mullaiththeevu that would include the village and lands of Keappaa-pulavu. This will be the nucleus for the Sinhalicisation of the new town of Mullaiththeevu, informed sources said.

Keappaa-pulavu, with its tract of jungle land, which is the only dense jungle in the division, has been chosen for the dual purpose of militarisation and Sinhalicisation. The stretch lays on the western side of the Nanthik-kadal lagoon, adjacent to Mu’l’li-vaaykkaal, the scene of the genocide. Already a large Buddhist stupa with an all-Sinhalese signboard has been built at a close-by location, Veddu-vaaykkaal (Vaddu-vaakal).

Orphaning Eezham Tamils in their own land to destroy their livelihood as well as status for generations to come and building Sinhala cantonment townships go side-by-side to irreversibly complete the genocide, while India and the International Community of Establishments ostensibly deny any genocide in the past or present, said new generation Tamil political activists in the island.

In the last three years, no efforts have been taken either by the International Community of Establishments or by India in checking the current course of affairs, because the very paradigm of reconciliation without recognising the genocide and the need to restore the sovereignty of Eezham Tamils, is wrong to the chronic context in the island. The blame also goes to Tamil political activists in the island and in the diaspora who do not address to the fundamentals, listening to ‘advises’ coming Washington and New Delhi, not to wage the struggle using terms such as genocide, right to self-determination, sovereignty and independence, the new generation activists further said. 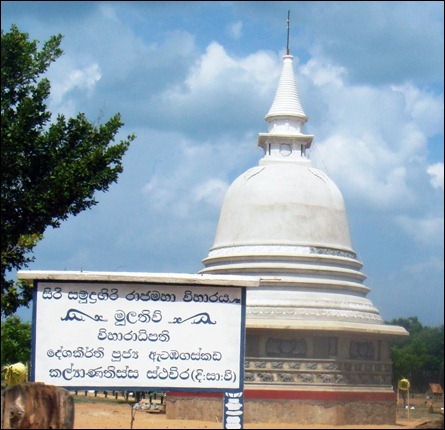 The Sinhala-Buddhist stupa at the genocidal ground of Vadduvaakal. Note the all-Sinhala board mutilating the place name Mullaith-theevu.