A compilation of large-scale massacres from 1956 to 2008, brought out by the North East Secretariat on Human Rights (NESoHR), has been translated to German. The book, “Damit wir nicht vergessen” will be launched at Frankfurt Book Fair this month. The publication has an important historical dimension as it presents the massacres prior to 2009 genocidal onslaught in a historical dimension, says Emeritus Professor Peter Schalk in Uppsala, Sweden, sending an introductory note to TamilNet. “In a shortened time perspective those violations of human rights [in 2009] may appears as an occasional and random deviation of a particular Government of Sri Lanka or as committed by individual offenders. We have good reasons to assume that this massacre by the government represents a planned cultural and physical genocide over a long time,” he further says adding that a Chinese translation is desirable.

“The Chinese people should know to whom in Sri Lanka is transferred their acquired surplus value through hard labour,” says Professor Peter Schalk. 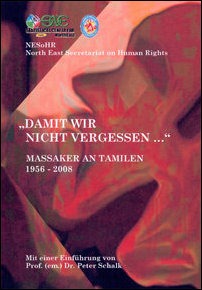 The data collection for the period from 1956 to 2002, had been carried out by the Statistical Centre for North East (SNE) under the de-facto Tamil Eelam administration, headquartered at Ki’linochchi in Vanni, in 2003 after the signing of the ceasefire agreement in 2002, which allowed relatively free access to all areas of the Tamil homeland. Affidavits were also obtained by the SNE from the surviving victims through the village officers (GS).

The data collection is not a complete document on the large-scale massacres prior to 2002 as it did not include those who had moved to places outside the Tamil homeland. Also missing are information about families that were killed en masse because no one were left in the villages to report about them.

Founded in June 2004, the North East Secretariat on Human Rights (NESoHR), which emerged as the de-facto human rights arm of the Tamil civil administration, brought out the compilation in part one in 2007. The publication, which listed nearly 115 different incidents of killings and large-scale massacres, did not include the war crimes committed by the IPKF.

The IPKF massacres, documented by the NESoHR were however brought out in a separate publication, “In the Name of Peace: IPKF Massacres of Tamils in Sri Lanka”, by Delhi Tamil Students Union in April 2011.

The NESoHR had its own mechanism of documenting the atrocities and massacres and was issuing a number of in-depth reports of human rights violations that took place after 2002. However, the NESoHR was forced to stop functioning in late 2008 due to the genocidal onslaught on Vanni. These reports were included in the publication “Massacres of Tamils 1956-2008” published by Manitham Publishers in 2009.

Rev Fr M X Karunaratnam, the chairman of the NESoHR was assassinated in a Claymore attack by a Deep Penetration Unit (DPU) of the Sri Lanka Army in April 2008.

Earlier, two of the founder members of the human rights body, former parliamentarian Ariyanayagam Chandra Nehru from Ampaa’rai and parliamentarian Joseph Pararajasingham had been assassinated by SL military intelligence.

NESoHR’s work can be studied at close range in Dr. N Malathy’s recent work: “A Fleeting Moment in my Country. The Last Years of the LTTE DE-Facto State.”

Malathy’s work also takes the reader beyond 2008, to the “worst genocidal actions in the modern history of Ilam, of the annihilation of tens of thousands civilian Tamils while fleeing and while pining away in concentration camps in 2009,” Peter Shalk writes in his note on the translation of NESoHR compilation into German language.