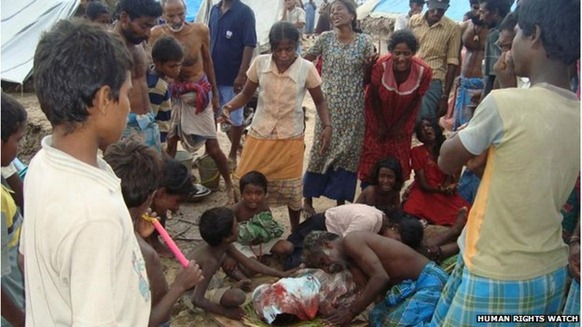 The Sri Lankan civil war – which claimed 100,000 lives – ended in 2009 when government forces finally crushed a near-40-year-long insurgency by the Tamil Tiger rebel group. The final months were especially brutal and survivors will not easily forget what happened to them.

It was not hard to spot her. The house on the outskirts of Dublin, Ireland, was full of plump Sri Lankan Tamils, joking loudly and overloading the table with dishes of steaming biryani for Sunday lunch.

In the corner, reluctant to come forward, stood a skeletal gaunt-faced woman with dark circles under her eyes, a tell-tale sign of sleepless nights.

When her brother stood next to her it was impossible to see any family resemblance because she was so physically different after months of starvation and trauma. She looked like the figure in Edvard Munch’s famous Scream picture come to life.

I call her Sharmila but that is not her real name. Nobody who escapes Sri Lanka wants to be identified when they tell their stories for fear of what might happen to their extended families back home. Sharmila more so than others because she left behind a husband and two children.

A farmer’s wife inside rebel-held areas of northern Sri Lanka, Sharmila was one of hundreds of thousands of Tamil civilians caught up in the final phase of the war as the government crushed the Tamil Tiger rebels once and for all.

A UN investigation said it was possible up to 40,000 people were killed in those five months alone. Others suggest the number of deaths could be even higher.

As European tourists sunned themselves on Sri Lanka’s southern beaches in 2009, at the other end of the island Sharmila was cowering on a squalid overcrowded beach as scores of rockets from multi-barrelled launchers pummelled the area.

Doctors were forced to amputate children’s legs without anaesthetic, using butchers’ knives in a series of makeshift hospitals that repeatedly came under direct fire. Human rights’ groups counted 35 attacks on hospitals in those months – too many to be purely accidental.

It is a story of atrocities that was not fully told at the time – journalists and aid workers were barred from the war zone.

Three years on, most of the Sinhalese – the majority of Sri Lankans – simply choose not to ask what their troops did in the name of victory. The government still denies accusations that it committed war crimes.

Sharmila though cannot forget how she used a shovel to collect up the body parts of her neighbours, blown to pieces by shells.

She is haunted by all the people she saw die: a man as he took his son to the toilet, two small children nearby, hundreds queuing under a tree for food.

Her own daughter narrowly missed being hit by a shell and a bullet whizzed past her cheek when she went to a Hindu temple to pray that if they were going to die, it would at least be all together, rather than one by one.

If the indiscriminate shelling by the government was not enough, there was the added threat of the rebels who needed cannon fodder.

Sharmila’s daughter was 14 years old and at risk of being snatched. It had long been compulsory for every family to give one child to the rebels to fight. As the war drew to a close they returned for the others.

It happened to Sharmila’s sister as they camped on the beach. Her first son died fighting so the rebels came for the second, then the third, only 16 years old.

"Kill us first, we have already given you two children," screamed Sharmila’s sister, but the Tigers just pushed her aside and snatched the boy. That was the last they ever saw of him.

As she told her story in Dublin, she twisted her sweating palms in anguish and her chair started wobbling. Then I noticed the curtain behind her was quivering too – her whole body physically trembling so much with the effort of remembering that it made everything around her vibrate.

I have never seen a person so literally shaken by what they had experienced, many months after the event.

Sharmila is typical of the survivors I have interviewed, many of whom are now suicidal, broken people coming forward to tell their stories for the first time.