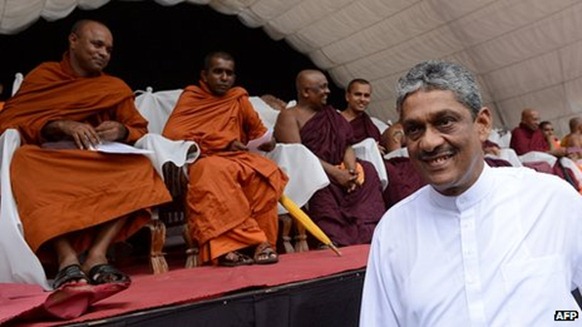 But the BBC’s Charles Haviland in Colombo says that disunity among the opposition meant the turnout was low.

But he lost after a vitriolic campaign and was imprisoned shortly afterwards.

Mr Fonseka’s lawyer said in May that the terms of his release prevented him from running for office for seven years.

But that has not stopped the former general – credited with playing a leading role in defeating Tamil Tiger rebels in the country’s civil war that ended in 2009 – from re-entering politics.

He and his supporters have pledged to fight constitutional changes which have made President Rajapaksa one of the world’s most powerful presidents.

They also strongly criticised what they said was the breakdown of the rule of law and the undermining of democracy in Sri Lanka.

Our correspondent says that although nearly 1,000 people including many Buddhist monks attended the rally and stayed despite a heavy downpour, the turnout was much lower than Mr Fonseka would have wished.

The former general is at loggerheads with Ranil Wickremesinghe, the leader of the main opposition party, who ordered his colleagues not to attend the rally.

Many of those who did go to it were strongly critical of Mr Wickremasinghe’s move, accusing him of creating divisions and sectarianism within the opposition.