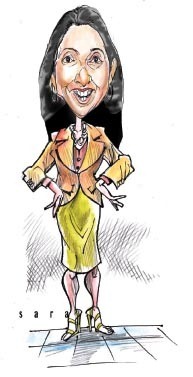 In her first interview with the media since assuming duties as the US Ambassador to Sri Lanka, Michele Sison says the United States, along with its partners in the international community, continue to urge Sri Lanka to address outstanding issues related to the Rule of Law, governance, accountability and reconciliation.

“The United States remains concerned by the consolidation of executive power, the fact that no agreement has yet been reached on political devolution, and the militarization of the former conflict zones,” she added. Referring to the country’s judiciary, Sison urged the Sri Lankan government to strengthen judicial independence by ending interference in the judicial process; protecting members of the judiciary from attack; and restoring a fair, independent, and transparent mechanism to oversee judicial appointments.

Q: What is the view of the US with regard the post-war situation in Sri Lanka?

A: The United States, as well as other partners in the international community, stands ready to support Sri Lanka as it moves forward on crucial issues of reconciliation and accountability. To that end, we continue to support projects, including public-private partnerships that promote reconciliation, reconstruction and economic growth, particularly in the former conflict zones in the north and east. In addition, we remain focused on supporting the Government of Sri Lanka’s de-mining efforts. We also continue in our efforts to support internally displaced persons. For example, we recently made an additional grant of US$ 3 million to support resettling communities in the Mullaitivu and Kilinochchi districts, to provide the means for adequate shelter, access to potable water, and food security.  This will assist approximately 50,000 individuals. We look forward to continuing to work with the Government of Sri Lanka on these important matters.

Q: You have just concluded a visit to the Eastern Province. What are you observations on the ground situation in those areas?

A: I was glad to have had the opportunity to visit our USAID and other assistance projects in Batticaloa and Trincomalee and the surrounding rural districts. I was impressed by the strength and commitment of the residents there to improving their lives.Through USAID, we seek to assist fishing and farming families in the former conflict zones of the North and East who have been displaced from their original communities.  These initiatives seek to bring dignity as well as livelihoods back to these communities by providing technical assistance and equipment.

During my visit, we opened two rural schools in the Batticaloa district constructed with US government funding.  At one of the schools, the parents had pooled their limited resources to purchase the land on which we helped construct teachers’ quarters.

I was truly impressed by the parents’ strong sense of community!  I also visited a number of our USAID public-private alliance projects as well as our projects aimed at assisting persons with disabilities, which are also quite noteworthy.

I was able to tour the site of one of our grants for cultural preservation, the historic Dutch Fort in Batticaloa.  By the way, we have a similar project underway at the Fort in Galle.  Of course, a real highlight of my recent trip to the East was attending the closing ceremony of a US Coast Guard training initiative with the Sri Lankan Coast Guard and Navy in Trincomalee.  The issues of maritime security and export controls are paramount in our bilateral relationship. I know that both sides, US and Sri Lankan, benefited greatly from this exchange.

Q: Does the US feel that Sri Lanka has shown progress in the human rights front since the last UPR in 2008?

A: As you may have seen, the U.S. Representative to the U.N. Human Rights Council in Geneva, Ambassador Eileen Donahoe, noted in her statement on November 1 the steps taken by the Government of Sri Lanka to resettle IDPs, foster economic growth, improve infrastructure, and develop a National Action Plan for implementing the recommendations of the Lessons Learnt and Reconciliation Commission.

remains concerned by the consolidation of executive power, the fact that no agreement has yet been reached on political devolution, and the militarization of the former conflict zones.

The United States has made several recommendations related to these matters, as well as recommendations with regard to the transfer of NGO oversight to a civilian institution; investigating and prosecuting attacks on media personnel and human rights defenders; and the importance of strengthening judicial independence.

Q: What areas do you think the Sri Lankan government should address more effectively?

A: The United States, along with our partners in the international community, continues to urge Sri Lanka to address outstanding issues related to the Rule of Law, governance, accountability and reconciliation. In light of recent reports on the efforts to impeach Chief Justice Shirani Bandaranayake and recent threats to Sri Lankan judicial officials, including the assault last month of a judge who had publicly criticized the  Government of Sri Lanka, we would urge the Government of Sri Lanka to strengthen judicial independence by ending any interference in the judicial process; protecting members of the judiciary from attack; and restoring a fair, independent, and transparent mechanism to oversee judicial appointments.

Q: The US posed a few questions for Sri Lanka’s UPR on the LLRC recommendations. What concerns does the US have in relation to the implementation of the recommendations?

A: The LLRC is the Government of Sri Lanka’s own report, and we simply urge the full implementation of its constructive recommendations.

Media and civil society need to be given the space to freely express their opinions. Addressing issues such as the removal of the military from civilian functions; the creation of mechanisms to address cases of the missing and detained; issuance of death certificates; land reform; and increasing local control and decision-making are all goals we have recommended.

We have also expressed concern about human rights violations and the need to fulfill legal obligations regarding accountability by initiating independent and transparent investigations and holding those found culpable to account.

Q: Do you think the Sri Lankan government has responded well to issues and concerns raised by the international community?

A: Relations between the United States and Sri Lanka are based on mutual interests and mutual respect. As a result, we have robust relations across a wide of range of issues in Sri Lanka, as do other countries.  We continue to partner with Sri Lanka  – with the government, with the business community, with educational institutions, and with civil society – on a myriad of shared goals.

Q: How do you think the international community could support Sri Lanka’s post-war development?

A: The international community continues to play an active role assisting with post-conflict work throughout Sri Lanka.

The United States in particular is helping meet basic needs through demining and assistance to some of the most vulnerable populations in post-conflict areas.  We are also offering English language skills development throughout the country.

We are supporting economic development through alliances with private companies to help the Sri Lankan private sector generate more opportunities for Sri Lankans. Since 2009, US assistance to the Sri Lankan people has been US$ 316 million.