In the domain of liberal democracy a motion to impeach a judge of the Supreme Court is a serious matter. That is permissible only if either there is suspicion of insanity or some problem akin to it. Analysis of an impeachment of any judge in the post modern world shows that the whole of intelligentsia in that country and in related countries were participants in one way or the other in the judgment. It was a public and transparent process where intimidation, political pressure and discrimination were at a minimum. Such a clear show was necessary to counter what happened under both fascism and Stalinism. It was made transparent so that the public were generally aware of the allegations – before those allegations are formally brought up.

The situation here is very different. The Mahinda regime preached about the responsibility of the judiciary and the respect given by the people to the judges and magistrates. Indirectly, the people were made to suspect that the CJ had misbehaved. The public is now aware of the allegations against the Chief Justice Shirani Bandaranayke. Before that, the whole thing was submerged in secrecy. There were campaigns, all political, against the CJ. Already, in the public domain, she is convicted of treachery and indecency. Village humbugs who rule the country thereby have converted her to a modern day Jesus Christ. It is clear that she is victimized for exposing the limitations of Parliament and the central government, in relation to the 13th Amendment. That is the greatest sin she has committed. Jesus became a conspirator and a criminal because he preached that all humans are equal and of single divine birth. Shirani has to bear the cross for saying that devolved power to the provinces cannot be simply overruled; that power sharing in the 13th Amendment is real. Her decision exposed the hypocrisy of the Mahinda Chinthanaya. That is her real crime. Jesus went against the laws of the Roman Empire and the Jewish claim of selected race, when Jesus said all humans are equal. In the same manner, Shirani violated the rule of Sinhala chauvinism when she ruled that the 13th Amendment obstructs Parliament in relation to the devolved subject. 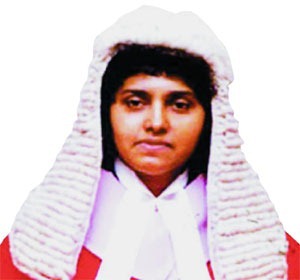 Mahinda has so far maintained his support to the 13th Amendment indirectly, as long as it is a mechanism for decentralization and diversification. But it cannot be a power sharing mechanism. When Shirani made it clear that the Constitution and the 13th Amendment stand for something different and devolution is already there, the regime faced a crisis. Now they do not care for the rule of law or the Constitution. What they want is to frighten and terrorize all those who are prepared to defend sharing power. So it is clear that Shirani has to be crucified in order to save the great hero of war, the man who finished the idea of Tamil liberation. She has become the goat to be sacrificed for the unitary state of Sinhala chauvinists.

The struggle of the government is not within the law. It is already a war conducted by terror and wild allegations. She is threatened to deny and change the ruling she has given already. There is clear evidence to establish that the government was involved in the attack on the JSC secretary, Manjula. Also it is clear that political mudslinging at Shirani is backed by the regime. In fact, GL behaved like a Stalinist Red professor in the recent adjournment debate in Parliament on the JSC. The Minister of External Affairs, in real terms, justified the attack on the JSC on the basis that its secretary was appointed contrary to the Constitution. He argued that according to the Constitution, only the senior most member of the minor judiciary can be appointed as the secretary of the JSC.

Manjula was 29th in the seniority list; and therefore should not have been appointed as secretary. There are no such provisions in the Constitution and it exists only in the head of the local Red Professor. Outside parliament, using the state media setup, the government is having a carnival of mudslinging and false propaganda against a woman who has given a historic judgment.

Mahinda knows that Parliament cannot act as a court in this case. It is clear that cases such as these are to be decided by courts and institutions that have been established to adjudicate judicially. However, MPs are made to believe that they can become a universal court in the name of the people. What they really expect is for this woman to break down and cry for help. In that way they expect to remove a stumbling block in their path to arbitrary rule.

The time has come for all of us to defend the woman carrying the cross on her shoulders. She may have done her job neatly not knowing the historic value of her stand, and maybe she has made mistakes in her judicial career. She and her family may not be the true example of a committed household, living according to norms and traditions within Lankan society. But whether she likes it or not, she is in the middle of a struggle against injustice and discrimination.

That makes her the women carrying the cross on her shoulder.