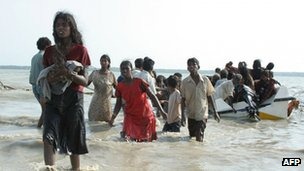 The Sri Lankan government has denied allegations that it intimidated UN staff at the end of the civil war.

The claims were made in a UN report leaked to the BBC, in which the UN accused itself of failing the civilian Tamil population in the final stages of the conflict in 2009.

The Sri Lankan UN ambassador said it was "absolute nonsense" to say a "small country" could intimidate the UN.

Plantations Minister Mahinda Samarasinghe told a press conference in the capital, Colombo, that he did not want to comment directly on the report.

But he said: "How can you intimidate them (the UN)? They don’t get intimidated by anyone."

The UN’s investigation into its own conduct during the last months of the conflict concluded: "Events in Sri Lanka mark a grave failure of the UN."

It said the organisation should in future "be able to meet a much higher standard in fulfilling its protection and humanitarian responsibilities".

The report does highlight the positive role played by some UN staff on the ground and the secretary general, but it points to a "systemic failure".

It questions decisions such as the withdrawal of UN staff from the war zone in September 2008 after the Sri Lankan government warned it could no longer guarantee their safety.

A Tamil school teacher now seeking asylum in Britain, said "We begged them (the UN), we pleaded with them not to leave the area. They did not listen to us."

The teacher who did not want to be named, added: "If they had stayed there, and listened to us, many more people would be alive today."

Mr Holmes said the UN faced "some very difficult dilemmas" at the time and could be criticised for the decisions it had taken.

The government and Tamil rebels are accused of war crimes in the brutal conflict which ended in May 2009.

The 26-year war left at least 100,000 people dead. There are still no confirmed figures for tens of thousands of civilian deaths in the last months of battle.

An earlier UN investigation said it was possible up to 40,000 people had been killed in the final five months alone. Others suggest the number of deaths could be even higher.

Hundreds of thousands of Tamil civilians remained in the war zone, exploited by both sides: forcibly recruited by Tamil Tigers or used as human shields; or under indiscriminate government fire.

On the day before the war ended, 17 May 2009, Mr Samarasinghe said: "Soldiers saved all the Tamil civilians trapped inside the war zone without shedding a drop of blood."

UN spokesman Martin Nesirky told the BBC the UN does not comment on leaked reports.

He said a final version would be published once the secretary general had received and read it.