The heat on the Mahinda Rajapaksa government has started to intensify with opposition political parties beginning to publicly voice concerns and displeasure while also questioning the government’s stance on key issues, especially the 13th Amendment to the Constitution.

The real architects behind the call for the abolition of the 13th Amendment are gradually coming out in the open. 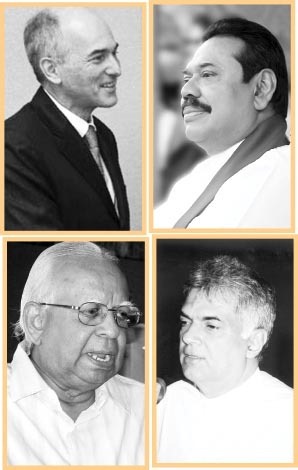 The fact that the intense campaign, by the likes of JHU’s Patali Champika Ranawaka and NFF’s Wimal Weerawansa, against the 13th Amendment is being carried out in connivance with persons holding senior office in the Rajapaksa government is evident by the statements made by none other than President Mahinda Rajapaksa himself.

In his budget speech, the President hinted of a possible change to the key mechanism of the 13th Amendment, which is the Provincial Council system.

He told Parliament, “A change in the prevailing Provincial Council system is necessary to make devolution more meaningful to our people. Devolution should not be a political reform that will lead us to separation but instead it should be one that unifies all of us,” he said, while noting that “national standards” were the main weapon for national reconciliation.

“There is a need to empower the people through a change in the Provincial Council system. It has to unite the people and the country,” Rajapaksa pointed out.

Also, Economic Development Minister Basil Rajapaksa that the government would introduce a 19th Amendment to the Constitution as an alternative to the 13th Amendment.

All these comments put together give a clear picture of the real architects behind the campaign to abolish the 13th Amendment and the loyalists chosen for the task.

The fact that Weerawansa met with Opposition and UNP Leader Ranil Wickremesinghe recently to discuss the abolition of the 13th Amendment, just three days after the President’s budget speech, indicates that the government did not want to leave any stone unturned in the campaign.

During his days in the JVP, Weerawansa was known to vehemently dislike Wickremesinghe and according to an opposition legislator, had even told UNP MPs in the Parliament lobby that the JVP did not want to hold any discussion with the UNP be it formal or otherwise as long as Wickremesinghe was the party leader.

The fact that Weerawansa has suddenly made a U-turn in his policy by meeting with Wickremesinghe and Co., show the seriousness of the government’s move.

Wickremesinghe on the other hand put the ball back in Weerawansa’s court saying the UNP was supportive of an entire overhaul of the Constitution where the executive presidency is abolished and the 17th Amendment reimplemented.

The likes of Weerawansa and Ranawaka are aware that political parties excluding the UNP, TNA and a few Left parties would support the government in a move to abolish the 13th Amendment.

However, Weerawansa who announced that a legal suit would be filed calling for the abolition of the 13th Amendment, cancelled the decision at the eleventh hour following legal advice.

Weerawansa also held a discussion with the ruling SLFP. It is learnt that he had also approached his former party, the JVP, for a meeting to discuss the 13th Amendment. His former comrades had dismissed Weerawansa’s letter after a good laugh.

Be that as it may, it is Opposition Leader Wickremesinghe who last week made a swift move to put the government in an awkward position in Parliament by raising the joint statements released by the Rajapaksa government with the UN and India.

He posed two questions to the government on whether it has rejected the joint statements released with the UN and India.

Wickremesinghe reminded Parliament that the Secretary General of UN and the Sri Lankan government had issued a joint statement on May 26, 2009 which read ‘President Rajapaksa expressed his firm resolve to proceed with the implementation of the 13th Amendment, as well as to begin a border dialogue with all parties, including the Tamil parties in the new circumstances, to further enhance this process and to bring about lasting peace and development in Sri Lanka’.

He had also observed that the government had similarly on many occasions, stated in writing as well as orally that the dissolution of power implemented under the 13th Amendment will be made further strong and systematic.

“The joint statement issued on May 17, 2011 with India had read, ‘The Minister of External Affairs of Sri Lanka emphasized that it is the resolve of the government to ensure achievement of a speedy and lasting progress in the discussion being held presently between the representatives of the Tamil parties and the government. The conditions required for such reconciliation will be met by a package of dissolution of power based on the 13th Amendment,” Wickremesinghe noted.

It is then that Wickremesinghe had said that despite such statements made by the government from time to time, there were completely different tones being heard. Especially, when the statement made by a senior member of the country’s defence establishment was echoed by the political allies of the government.

Referring to the organized campaign that is being carried out by members of the government, namely the JHU and Ministers Weerawansa and Dinesh Gunawardena, the Opposition Leader had queried the government’s position.

“Does this mean that the Government has changed its former stand? Or else, do the officers, allies and media of the Government beam an anti-Government opinion? Coming to the light of such contradictory opinions from various parties of the Government will bring disrepute and embarrassment to our country not only locally but also internationally.

“Therefore, I request the Prime Minister to answer the following questions clarifying the stand of the Government on the matter:

“2. If so, what is the present stand of the Government?”

The government has however not given a substantial response to the queries.

Meanwhile, TNA Leader R. Sampanthan had also said that a move to repeal the 13th Amendment to the Constitution would cause harm to the country’s future.

He had told Parliament that any attempt by anyone to modify or nullify the 13th Amendment, to make it ineffective and worthless could cause irreparable damage.

He had observed that the 13th Amendment was the only provision that recognized the diversity of the country to a certain extent.

Interestingly, senior SLFP members have remained silent on the entire 13th Amendment drama, which is now limited to a few governing party members.

Many SLFP seniors when asked respond said that the party leadership decides the party stance on the matter and that they would follow it.

These senior SLFP members who are seasoned patricians are not gung ho about the abolition of the 13th Amendment to the Constitution.

Most SLFP seniors have started to openly express their dissatisfaction with the government’s actions.

Officially responding on a query on the 13th Amendment, the Leader of the House Minister Nimal Siripala de Silva had said the government was willing to take up this matter in the proposed Parliament Select Committee (PSC) to find a political solution to the national issue.

He had added that the repealing of the 13th Amendment was not the official stance of the government though some of its allies had called for it.

De Silva has maintained that the government had clearly stated its stance in the Mahinda Chinthana policy statement and would not deviate from it. Therefore, the government was ready to discuss the 13th Amendment and the other proposals such as ‘Rata Sabhas’, district councils and state governments.

According to de Silva, the government was only agreeable to a system, which maintained the unitary status of the country and added that it was regrettable that the PSC had not got off the ground as the Opposition had failed to nominate its members for more than a year.

While the 13th Amendment drama continues to unfold focus has also been laid on the Indian stance in the whole drama.

India for its part has so far remained silent maintaining the role of an observer.

The TNA has become a critique of India’s silence. TNA MP E. Saravanapavan charged that India has betrayed the Tamil community in Sri Lanka by keeping silent while the Sri Lankan government tried to abolish the 13th Amendment.

He noted that the sacrifices by the Tamil community have been ignored.

However, India although displeased with the Sri Lankan government over the 13th Amendment issue, has opted to remain silent until Colombo makes a solid move towards the abolition of this piece of legislation.

With UNHRC Chief Navi Pillay’s impending visit to Sri Lanka and Sri Lanka’s resolution due to be taken up for review in March 2013, India is now taking note of the developments in Colombo.

However, while India is playing the role of silent observer, the Sri Lankan government has once again made overtures towards China.

China and Sri Lanka had firmed up their defence relations during a meeting of their top officials who pledged to make efforts to boost relations between the two countries and their militaries.

The Xinhua news agency has reported that during the meeting in Beijing, they had pledged to make efforts to boost relations between the two countries and their militaries.

The Defence Secretary is in China to attend the 9th China International Aviation and Aerospace Exhibition to be held in the southern city of Zhuhai where China is exhibiting its defence equipment including its new attack helicopter and fighter jets.

Later, top Chinese Communist Party leader, Wu Bangguo also visited the country during which 16 agreements had been signed focusing on infrastructure development in Sri Lanka including US$ 760 million in aid to help the island nation to become “Asia’s miracle”.

Meanwhile, British Prime Minister David Cameron is being urged by MPs to consider boycotting next year’s Commonwealth summit in Sri Lanka in protest at its human rights record.

The Commons Foreign Affairs Committee said it was wrong for Colombo to host the heads of government meeting amid reports of continuing “serious abuses”.

The PM should not attend unless he had clear evidence of progress, it added.

UK officials said it was too early to decide on the matter but it expected Sri Lanka to honour its commitments.

In a report on the UK’s relationship with the 54-member organization, the cross-party committee said there were “serious questions” about whether the next Commonwealth Heads of Government Meeting (CHOGM) should be taking place in Sri Lanka.