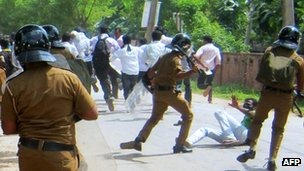 Police in northern Sri Lanka have made a series of arrests which they say are linked to combating terrorism, three years after the separatist Tamil Tigers were defeated.

Up to 25 people are being held, a top official told the BBC. Police are also reportedly hunting several students.

Espousing separatism is illegal in Sri Lanka. Suspects can be held without charge for 18 months.

The detentions come at a time of rising political tensions in the north.

‘Kept in the dark’

Officials gave differing accounts of the number of arrests made by anti-terrorist police in the latest raids.

Police spokesman Prishantha Jayakody said that 10 men had been detained on Wednesday in the Jaffna area, all of them accused of "terrorist activities" with the Tamil Tigers or LTTE before 2009.

Mr Jayakody said that none those being held had completed a government rehabilitation course for LTTE suspects and none had surrendered to the police or army at the end of the war.

"They were arrested at different places on the Jaffna peninsula and are now in Vavuniya," he said. "All the families have been informed."

He said that police were guided to the suspects by intelligence reports.

But the head of the police’s Terrorist Investigation Division, Chandra Wakista, told the BBC that as many as 20 to 25 had been detained.

"No arrests have been made without procedure, all of them were made officially," he said.

The police say families have been given official documents relating to the arrests.

But the BBC’s Charles Haviland in Colombo says that some relatives have apparently been kept in the dark – one family told a newspaper they only got official information on their son’s arrest a long time after he disappeared, and only after they informed the official human rights body.

Rights workers are also mindful of the fact that a year ago two young campaigners disappeared in Jaffna, where tensions have continued since the end of the war in May 2009.

Separately, sources in Jaffna University say the police have given them a list of 10 students they want to arrest.