The telephone summoning of the Jaffna University Teachers’ Association (JUTA) president and head of English language teaching at the university, A Rajakumaran, to the Terrorist Investigation Department (TID) of occupying Sri Lanka on Friday is widely seen in the university circles as the beginning of a direct war on the Tamil university teachers by the occupying State. Rajakumaran is summoned in connection with his media statement, especially to the BBC, on the student protest in the university and in connection with his reported comments on the views that in future the teachers’ union and the students’ union should jointly observe the Heroes Day as a measure against situations such as the one unfolded this year.

The occupying SL military commander calling the Vice Chancellor, Deans and Heads of the Departments to Palaali, and the summoning of the university teachers’ union president to the TID show the beginning of a new phase of SL militarisation of the university education of Eezham Tamils, Jaffna University circles said.

On Wednesday the student union representatives have said that the students would not drop the protest and attend the classes unless the detained student leaders sent for ‘rehabilitation’ by the SL military are released.

Meanwhile, the Medical Faculty students are silently attending classes on a tacit understanding, university circles said. The General Hospital in Jaffna is also a Teaching Hospital of the university.

Occupying SL military and a paramilitary collaborating with it entered the Gents and Ladies Hostels of the university and attacked students when they were silently observing the Heroes Day on 27 November. The following day, when the students were protesting the attack in a peaceful demonstration, the SL military, police, and paramilitary again attacked them.

As the public opinion and international opinion were mounting against the SL government and its military in Jaffna, with sheer disregard the SL government went further in arresting and detaining the student leaders and activists under fabricated ‘terrorism’ charges.

Colombo also accuses the students that they are directed and funded by the diaspora.

Releasing the detained students is our discretion. They have been sent for ‘rehabilitation’. Don’t wait for their release to resume classes. The university administration and departments should start classes immediately even if no students come, is the position of the SL military occupying Jaffna and the SL Defence Secretary and presidential sibling Gotabhaya Rajapaksa.

The boycotting students and the teachers showing solidarity are intimidated individually and collectively by the occupying military.

Losing all faith in the government in Colombo, the students have appealed to the International Community.

The Jaffna University situation has evoked sympathy and solidarity for the students from several quarters, locally and internationally.

But, two key players, New Delhi and Washington are still playing along with the genocidal government in Colombo against Eezham Tamils, political observers in Jaffna said.

The Heroes Day oppression in Jaffna by the occupying SL military started in Nov 2009, when the Indian foreign minister chose to visit Jaffna on that day. In this year November’s incidents an allegedly India-backed paramilitary collaborated with the SL military, news sources in Jaffna said.

The US embassy in Colombo that came out with one-sentence concern on the students issue treated it secondary to the attack on journalists the same day.

Maj. Gen. Mahinda Hathurusinghe’s placement in Jaffna by Colombo, as the commander of the occupying Sinhala forces with a deep plan of militarising the rule on Eezham Tamils, enjoys understanding and blessings of the international abetters of Colombo, political observers say. Hathurusinghe, within few months of his appointment in Jaffna, was awarded Gucci Peace Prize at a function in Philippines. SL military website said that this was an Asian equivalent of Nobel Peace Prize. 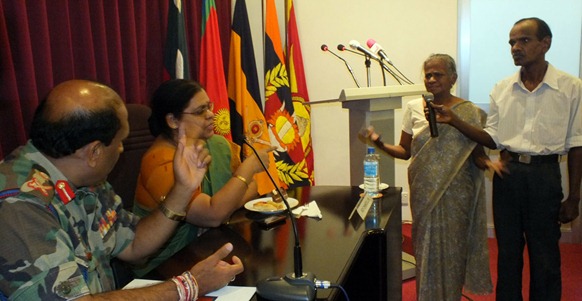 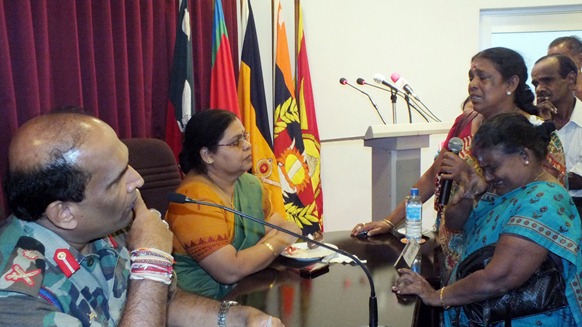 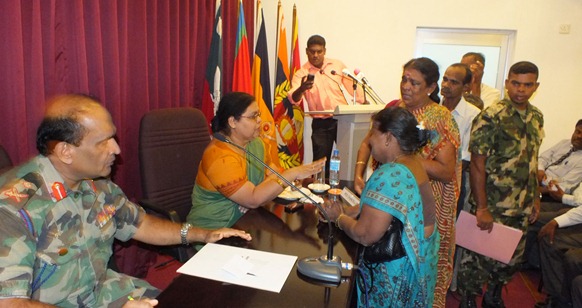 Hathurusinghe brushing aside pleadings and the Jaffna University Vice Chancellor Prof Vasanthy Arasaratnam conveying that to the parents of the detained student leaders. Hathurusinghe’s right hand wrist is full of ‘sacred threads’ tied on to it to protect him from danger. This is an ancient Dravidian practice continued by Buddhism of the Sinhalese.