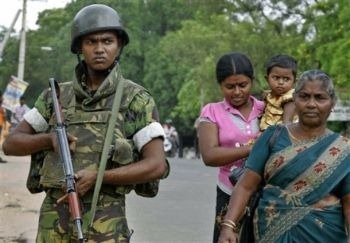 (LONDON) – The Transnational Government of Tamil Eelam (TGTE) condemned the coerced conscription of over 140 young Tamil women by the Sri Lankan Security forces. TGTE also raised concerns about the behavior of the Security forces, when they entered women’s hostels of the Jaffna University on November 27th.

“Sri Lankan Security forces have a long history of sexually assaulting and raping Tamil women. Twenty one of the coarsely conscripted Tamil women have been admitted to hospitals with mentally affected state” said Mrs. Balambihai Murugadas, Minister for Women, Children and Elderly Affairs of the Transnational Government of Tamil Eelam (TGTE).

According to Women’s Action Network (WAN), these young Tamil women were living in destitute and vulnerable conditions following the end of the war and have applied for a training believing that this training is related to a local government agency and would receive Rs. 30,000 per month.

According to WAN, none of the women or their families were advised that they are being recruited to join the Sri Lankan Security Forces.

Tamil areas of that island are saturated with the Sri Lankan Security forces. Twelve of the fifteen Sri Lankan military divisions are stationed in Tamil areas.

“It is vital that the international community take immediate action to create an International Protection Mechanism to protect Tamils in that island” said Mrs. Balambihai Murugadas. “Tamil students are still in custody and they should be released”

Mrs. Balambihai Murugadas also urged the UN Secretary General Ban Ki Moon to appoint an International Commission of Inquiry on Sri Lanka, under Article 99 of the UN Charter. According to the recently released UN’s internal investigation report on Sri Lanka, UN Secretary General’s own legal team recommended this action for the mass killing that took place in May 2009, when tens of thousands of Tamils were killed in five months.

As noted by the UN Internal Review Report given the “constraint mandate of the LLRC coupled with the lack of an enabling environment for judicial follow up the UN Secretary General need not wait till the exhaustion of the domestic remedies”. Justice delayed is justice denied.

Tamils have faced years of abuse by the successive Sri Lankan Governments. Since 1958, numerous mass killings of Tamils took place in that island and the mass killing in 2009, prompted the UN Secretary General Ban Ki Moon to appoint a UN Panel of Experts for a report on the killings.

According to this UN Panel report, over 40,000 Tamils were killed in five months due to deliberate and intense carpet bombing of areas designated by the government as "no-fire zones", where Tamils assembled for safety. The Sri Lankan Government also restricted food and medicine for Tamils, resulting in large numbers of people dying from starvation and many of the injured bleeding to death. The UN Panel also recommended an International Commission of Inquiry.

In addition to the killings, thousands of Tamils have disappeared, Tamil women were sexually assaulted and raped, large numbers of Tamils are imprisoned without trial and abductions are continuing. Tamils are singled out to face these abuses simply and solely on account of their Tamil nationality. Members of the Sri Lankan Security forces are almost exclusively from the Sinhalese community and the victims are all from the Tamil community.

Due to the sheer number of civilian killings by the Sri Lankan Security forces, the UN Human Rights Council passed a resolution on accountability for these crimes and is about to review it in March 2013.

Source: Transnational Government of Tamil Eelam (TGTE): a democratically elected government of the Tamil Diaspora of Sri Lanka. Its actions are non-violent, democratic and diplomatic. It held internationally supervised elections in twelve countries to elect Members of Parliament (MPs). These MPs drafted and ratified a Constitution and elected a Prime Minister, a Cabinet and a Speaker.

Transnational Government of Tamil Eelam (TGTE) was created in the aftermath of the bloody end of Sri Lanka’s war; resulting tens of thousands of Tamil civilians were killed and sexually assaulted by the Sri Lankan security forces. UN documented war crimes and recommended an International Commission of Inquiry.