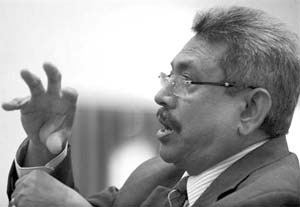 “When carrying out his work the President has been faced with various challenges. Everyone knows that school children, university students, university lecturers and trade unions were used to create trouble. But because of the confidence the people had in the President the trouble makers could not achieve their goal. Today they are attempting to do it through the judiciary.

They want to destabilise this country. We know that peace and stability is vital if a country is to develop and for tourists and investors to come here,” he said

He told those who had gathered for the “Wayamba Asiriya 2012” that a conspiracy was being hatched by foreign elements to topple the Rajapaksa regime.

Mr. Rajapaksa said the country was facing challenges similar to those that existed during military conflict. He said LTTE activists in other countries were attempting to regroup and create chaos in Sri Lanka.

“Many consumer goods that can be produced locally are imported in large quantities. Although it is hard to believe, even tamarind is imported. It is sad that we import food crops that grow well in the country.  If we are self-sufficient in food, the colossal expenditure on imports can be curtailed to the barest minimum.

The foreign exchange savings can be used for development programmes. The government provided incentives including fertiliser subsidy to the farmers regardless of the war expenditure.

The most formidable challenge facing many countries is the want of food security. A country with food security will never collapse. Foreign elements attempted to pose a challenge to the government through the university teachers and the students, but failed. Now they are attempting to gain their end through the judiciary”