Citing the posters that appeared in Colombo and in southern parts of the island last week, a notice in Sinhala addressing ‘intelligent students’ of the Jaffna University, invariably accused all shades of Tamil polity in the island and in the diaspora that are not collaborating with the genocidal regime, as working for the division of the ‘country’. The notice also accused Sinhala students and shades of Sinhala Left in the south showing solidarity with the students of the Jaffna University, as unconsciously becoming a “prey to the interests of the LTTE to divide the country.” An English translation of the notice is produced herewith.

PDF: English translation of the note in Sinhala distributed to university students in South 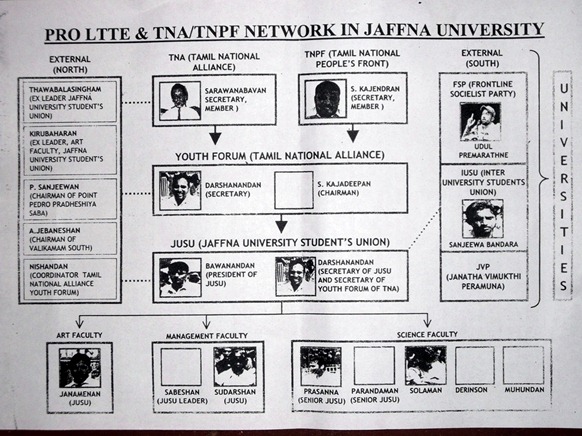 The posters and the notice named the main Tamil political parties TNA and TNPF based in the North and East of the island, Inter-University Students’ Federation and Frontline Socialist Party based in the South and all the shades of diaspora activism which the force behind the posters ‘classify’ as the TGTE, GTF, TCC and Headquarters Group.

Who finally remain left out by the posters and the notice were the collaborating EPDP that too now subtly sidelined by the regime, the Ankajan Group, a direct part of the regime’s Sri Lanka Freedom Party (SLFP) the regime now tries to simulate to impose on Tamils in the North, the TMVP in the East outwitted by the regime and rejected by people, KP in captivity and the few collaborating individuals operating in the diaspora, who accuse others for ‘interfering’ in the affairs of the island from being in the diaspora but reserve that ‘license’ only to them, Tamil political observers in the island commented.

According to the political observers, the posters and the notice indirectly acknowledge the following:

The current wave of terror unleashed against Tamil youth in the island by the State and regime of Sri Lanka, as a part of the chain of terror campaign since the genocidal war, aims at isolating Tamils from their polity by intimidation, and aims at prodding Tamil youth needing security to join the elements and outfits run or promoted by the genocidal State and its abetters, the political observers said, adding that the terror campaign is part of a larger orchestration.

At the height of the current terror campaign, a security analysis team of New Delhi was present in the North and East. When Mr. Sampanthan denounced the LTTE and detracted total withdrawal of the occupying SL military, a key person of a ‘group’ backed by the West in setting agenda on Sri Lanka was tweeting that Sampanthan’s speech reflected an influence of his recent reporting and that was “good to see”, the political observers cited.

Just like the Colombo posters and the notice, the international abetters of genocidal Colombo too are known for mischievously not distinguishing the ‘terrorism’ they saw in the LTTE, which they still ban, and the righteous national liberation aspirations of Eezham Tamils.

The posters and the notice remind all the shades of Tamil national polity in the island and in the diaspora of the need of showing solidarity and unwavering firmness on the fundamentals in presenting Tamil aspirations to the world and to the face of the powers, the Tamil political observers in the island further said.